Rapper Lil Nas X released the music video for his song “Industry Baby” on Friday, which doubles as a fundraiser for The Bail Project, an organization that funds bail for incarcerated people, and claims that the justice system in the U.S. “criminalizes race and poverty.”

The Bail Project was formed by several members from The Bronx Defenders, a public defenders office that is contracted with New York City. While it claims to be fighting “mass incarceration,” the organization landed in trouble in 2020 when one of its members was reportedly caught renting a U-Haul truck that was shown in online videos delivering supplies to rioters in Kentucky.

Like other so-called bail charities, The Bail Project has received support from Hollywood celebrities. In addition to Lil Nas X’s fundraising effort, singer John Legend has donated to the project while the singer known as Tinashe held a virtual concert fundraiser. Actor Danny Glover serves as an adviser to the project.

In an Instagram Story, the rapper claimed that “true freedom” means “change in how the criminal justice system works, starting with cash bail.”

“I know the pain that incarceration brings to a family, and I know the disproportionate impact that cash bail has on black Americans,” he added. “There are so many stories that call on us to take action, and I invite you to join me in this important civil right issue.” 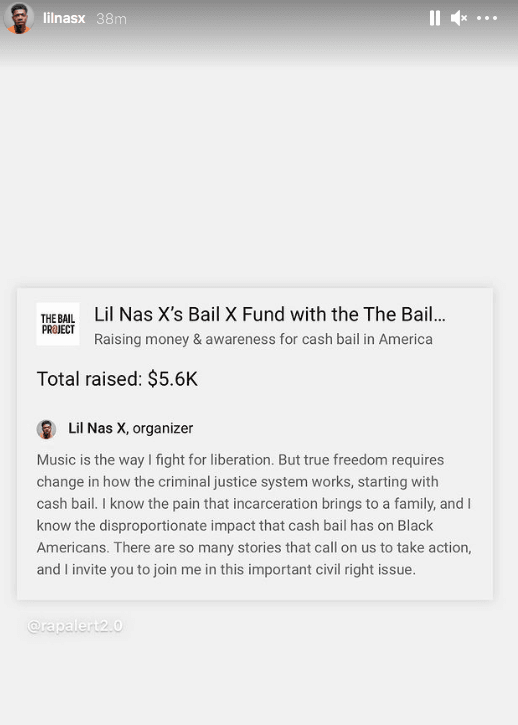 In the music video meant to raise awareness for The Bail Project, the rapper is sentenced to five years at the fictitious “Montero State Prison,” where he lifts weights, dances naked in the showers with fellow inmates, and breaks out of prison — à la Shawshank Redemption.

In the description for the music video on YouTube — which has already garnered over 14 million views as of Saturday afternoon — Lil Nas X includes a link to “donate to the Bail X Fund to help with cash bail around the country.”

The “Bail X Fund” is the rapper’s joint effort with The Bail Project, which disclosed in May that it had funded $41 million worth in bail for more than 16,000 individuals.

In the preview trailer for Lil Nas X’s music video — released on Monday — the rapper attacks U.S. Supreme Court Justice Clarence Thomas for mockery, as the singer is seen on trial in the “Supreme Court” with a judge identified in the credits as “Judge Thomas” presiding over the case.

In the trailer, the spoof court case is about Lil Nas X’s recent controversy surrounding his limited edition sneaker line, known as “Satan Shoes,” and Judge Thomas ultimately sentences the rapper to prison for being “gay.”

Last month, Lil Nas X showed up to the BET Awards wearing a dress that compared Catholics to Nazis.