Eternals, the latest from the Marvel Cinematic Universe, is a dreadful mix of Matrix Reloaded (2003) and Justice League (2017).

Because there are so many sequels and prequels and director cuts and reimaginings, that comparison might be confusing, so I’ll be clearer. Matrix Reloaded is the second Matrix movie.  Justice League is the first Justice League movie, not the 287-hour Zack Snyder’s Justice League released in March.

Okay, so what I mean is this… Remember all the confusing mumbo-jumbo in Matrix Reloaded? The interminable plot explanations filled with words like “ergo?” Eternals is a lot like that. Even the explanatory text that opens the movie had me scratching my head. From there… Holy moly. Ergo, ergo, ergo, ergo…

Okay, so remember Justice League? Not the Zack Snyder one, the first one? Remember all the awkward banter we were supposed to find charming and humanizing? Remember how none of the characters gelled together or had any chemistry? Eternals is definitely like that.

This might not be something moviegoers register, but we do forgive a lot, even a weak script, if we find the characters appealing and the actors have chemistry—you know, if the relationships work. That’s what sinks Eternals. Not for a moment do you believe these people have spent thousands of years together or that they have any kind of history. The movie is desperate to recreate what made the Avengers so marvelous, which was just the joy of seeing the band hang out together. The writing, the performances, the charisma of the actors… The Avengers clicked. The Eternals never come close, and sometimes it’s so forced, it’s painful to watch.

Also painful to watch is the cinematography. The movie is receiving all kinds of love for how beautiful it is. Well, I found it gray and bleak and oppressive.

Now I’m going to share something I found strange and distracting… Angelina Jolie.

The movie’s star is Gemma Chan, who plays an Eternal named Sersi. Don’t get me wrong, Gemma Chan is plenty cute, but whenever she’s on-screen with Jolie, I kept looking over her shoulder for Jolie. Why is Gemma Chan the star of a movie that has Angelina Jolie in it? Why is Jolie — one of our last remaining movie stars, a true talent who blows everyone else off the screen — always off to the side or standing behind a bunch of not-very-charismatic actors who have a television rather than movie presence? 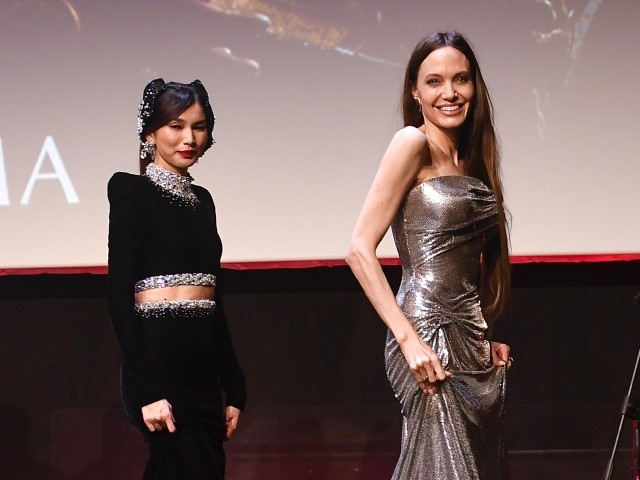 Gemma Chan and Angelina Jolie attend the official premiere of the movie “Eternals” during the 16th Rome Film Fest 2021 on October 24, 2021 in Rome, Italy. (Photo by Antonio Masiello/Getty Images for RFF)

I kept waiting for everyone to die, so Jolie could assume center stage and lift this dud into something that at least felt like a movie, as opposed to a television movie.

Is this someone’s idea of equity? Shoving a real movie star to the background so a BIPOC (whatever that means) can be the star?

Also, Jolie’s character kept spazzing out for reasons no ergo could ever make sense of.

Another big problem is the movie’s structure, which is weighted down with unnecessary flashbacks that do nothing to advance the story. The main story, which takes place in the present and has something to do with saving the earth (natch), isn’t all that hot. Even so, all the momentum-killing trips back in time to offer up plot points — that a line or two of exposition could’ve handled — unnecessarily add to the runtime of a 157-minute movie that already has pacing problems.

The plot also twists itself into a nonsensical pretzel. Get this; the Eternals are sent to earth by a Celestial (don’t ask) to protect earthlings from the Deviants. During the worst of the ergo-ergo-ergo scenes, we learn that there’s a nefarious reason for this. The Celestials (please don’t ask) aren’t saving earthlings out of altruism. The truth is that they need the earthlings for some kind of birthing fuel or something. Ah, but then we’re told the Eternals are under strict orders to stay out of human events. It’s even against the rules to stop wars that kill millions or have the potential to kill everyone. Why? Because, uhm, wars result in the creation of technology, ergo technology results in a higher standard of living and more people!

Have you ever heard of anything so stupid in your life?

CHILD: But the Celestials don’t really care about people, they just need them for fuel! Is that cool, or what!

ADULT: Okay, but then why don’t the Eternals stop the wars that kill so many people?

ADULT: Okay, but then why didn’t the Eternals stop Thanos from wiping out half the population?

CHILD: Well, that was onaccounta, uhm.. Well, there are rules and stuff and ergo I hope you get hit by a train.

ADULT: I have more questions.

ADULT: If the idea is to save as many humans as possible, why does that Eternal melt down like a girl over Hiroshima, when we know dropping those two atomic bombs saved many times the lives that were lost, including Japanese lives?

CHILD: Why don’t you shut your stupid face.

ADULT: If the Eternals are created by the Celestials, why is one deaf?

CHILD: Your face is stupid.

This is one dumb movie.

The only thing I appreciated about Eternals was that the man-on-man kiss was telegraphed enough in advance I had plenty of time to cover my eyes.