“The disappearance of summer sea ice in the Arctic is one of the first landmines in this minefield, one of the tipping points that we set off first when we push warming too far,” said Markus Rex, who heads the atmospheric physics section of the Alfred Wegener Institute for Polar and Marine Research.

“And one can essentially ask if we haven’t already stepped on this mine and already set off the beginning of the explosion,” Rex warned Tuesday.

Rex said his team found that the Arctic Sea ice had retreated “faster in the spring of 2020 than since the beginning of records,” adding that “the spread of the sea ice in the summer was only half as large as decades ago.”

“Only evaluation in the coming years will allow us to determine if we can still save the year-round Arctic Sea ice through forceful climate protection or whether we have already passed this important tipping point in the climate system,” he said.

Climate scientist Stefanie Arndt, who accompanied the voyage for 140 days, said it is “painful to know that we are possibly the last generation who can experience an Arctic which still has a sea ice cover in the summer.” 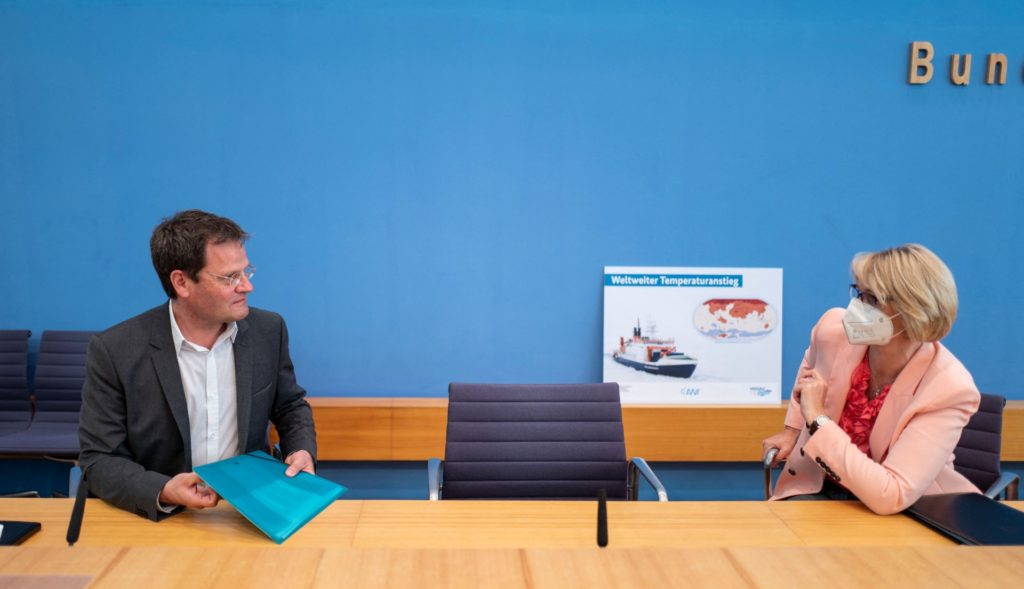 Atmospheric physicist and leader of the MOSAiC expedition Markus Rex (L) chats with German Minister for Education and Research Anja Karliczek after a press conference presenting the initial results of the MOSAiC expedition, the largest scientific undertaking in the polar region to date, in Berlin on June 15, 2021. The Polarstern mission, dubbed MOSAIC, spent 389 days collecting data on the atmosphere, ocean, sea ice and ecosystems to help assess the impact of climate change on the region and the world. (JOHN MACDOUGALL/POOL/AFP via Getty Images)

“This sea ice cover is gradually shrinking and it is an important living space for polar bears,” Arndt added.

Despite predictions of disasters for polar bear populations, they have, in fact, proven remarkably resilient to changes in polar ice, a phenomenon explored by climate skeptic Dr. Susan Crockford in 2017.

Crockford pointed that since polar bears do the bulk of their eating in the spring and fast for much of the summer, the presence of summer sea ice has relatively little to do with their feeding habits.

Meanwhile, the population of ring seal pups in the spring — the polar bears’ chief food — has also continued to rise, helping the bear population to thrive.

“Thriving polar bear populations have exposed the hubris behind global warming’s most beloved icon and the plight of the polar bears has become an international joke,” Crockford stated.