A former college professor was arrested on Tuesday on suspicion of setting fires near the massive Dixie Fire in Northern California, which has already destroyed over 500 homes and is nearing 500,000 acres, the second-worst in California history.

Gary Stephen Maynard, 47, is believed to have worked at a number of colleges in California, including Santa Clara University and Sonoma State University, where a Dr. Gary Maynard is listed as a lecturer in criminal justice studies specializing in criminal justice, cults and deviant behavior.

Maynard was arrested Saturday following an investigation that began July 20 and included a U.S. Forest Service agent placing a tracking device under his car after he had been stopped briefly by Susanville police on Aug. 3.

“Over the course of the last several weeks, Maynard has set a series of fires in the vicinity of the Lassen National Forest and Shasta Trinity National Forest…,” [Assistant U.S. Attorney Michael] Anderson wrote in a detention memo. “The area in which Maynard chose to set his fires is near the ongoing Dixie fire, a fire which is still not contained despite the deployment and efforts of over 5,000 personnel.

[U.S. Magistrate Judge Kendall J.]suggested there may be mental issues at play and ordered him to remain in custody pending a hearing Wednesday.

Sonoma State told the Bee that Maynard has not worked there since the end of 2000. 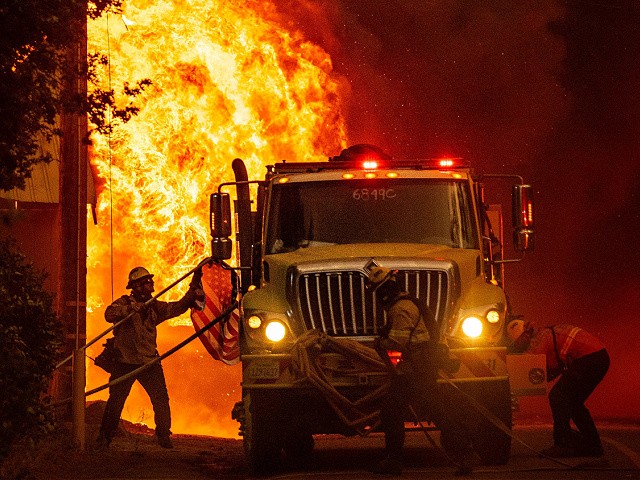 TOPSHOT – A firefighter saves an American flag as flames consume a home during the Dixie fire in Greenville, California on August 4, 2021. – The Dixie fire burned through dozens of homes and businesses in downtown Greenville and continues to forge towards other residential communities. Officials in northern California on August 4, 2021 warned residents of two communities in the path of the raging Dixie fire to evacuate immediately as high winds whipped the flames onwards. (Photo by Josh Edelson / AFP) (Photo by JOSH EDELSON/AFP via Getty Images)

The San Francisco Chronicle noted that the fire may continue to grow, given that “temperatures are expected to reach triple-digits with ‘erratic winds'” this week.

The Los Angeles Times added that the fire is so intense and so large that it is creating its own weather, creating pyrocumulus clouds that can spread fire to other states.

Democrats have blamed climate change for the fire, but as former Obama administration scientist Steven E. Koonin noted recently, other factors, including human activity, far outweigh climate as a cause of wildfires in California and elsewhere.