The never-ending fear mongering about how climate change will annihilate the planet in a matter of years is leading some young people to decide not to have children.

One of the websites promoting that narrative on a daily basis interviewed Cassie King, a 23-year-old who said as a child she wanted to grow up to be a teacher and have children of her own.

“But with more health crises and climate catastrophes, I started to worry more about the state of the world in just 10 years, let alone in 100 years when the children of my grandchildren would be having kids,” King told Inside Climate News. “That makes me feel like it would be wrong to bring someone into that chaos, without their consent.”

And King isn’t alone in vowing never to give birth, according to the website, which also notes in its reporting that overpopulation contributes to climate change.

Inside Climate News reported on how some are seeking help from the United Nations, the organization at the center of the effort to install global governance in the name of climate change:

Two nonprofits, Fair Start Movement and Population Balance, filed a complaint in late October with the United Nations Human Rights Council, on behalf of King and other young women, alleging that the United Nations has failed to protect the rights of younger generations to safely and sustainably have children.

“Young people are increasingly choosing not to have children, not because they don’t want them, but because they’re worried about how the climate crisis will impact their children’s future,” said Carter Dillard, policy advisor for Fair Start, which advocates on behalf of families and children and is based in San Francisco.

The United Nations is obligated to interpret the “right to found a family” from Article 16 of the Universal Declaration of Human Rights in a way that preserves that right for generations to come, Dillard said. Instead, U.N. member states have limited the ability of future generations to found a family in a safe and healthy way by “encouraging unsustainable population growth models that have contributed to climate change.”

The report said that the U.N. council recently passed a resolution “formally recognizing a healthy and sustainable environment as a basic human right.”

The report also cited a nationally representative 2020 survey by Morning Consult that found 11 percent of respondents cited climate change as a “major reason” why they didn’t have children. 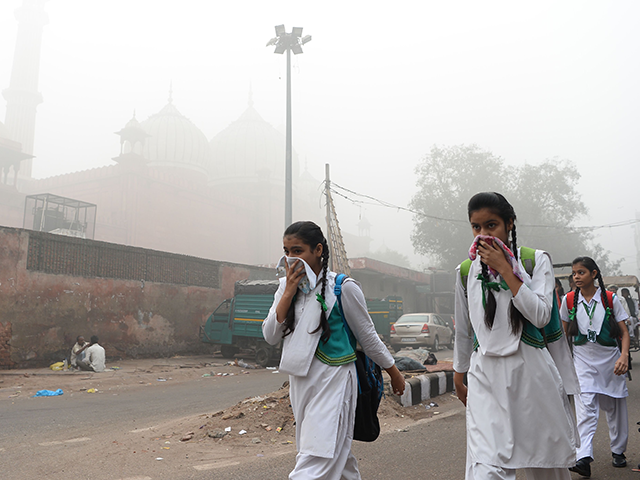 Indian schoolchildren cover their faces as they walk to school amid heavy smog in New Delhi on November 8, 2017. (Sajjad Hussain/AFP via Getty Images)

The agenda of the organizations behind the lawsuit is in keeping with the left-wing worldview of the planet being more important than human beings.

“According to their website, the Fair Start Movement was founded in 2014, in the belief that ensuring children ‘a fair start in life’ means providing incentives for smaller and well-planned families, which will also serve as a pathway to a more sustainable future,” Inside Climate News reported. “Population Balance, based in Minneapolis, wants to achieve a smaller human footprint by challenging overconsumption and pronatalism, the policy and practice of encouraging people to have children.”