House Speaker Nancy Pelosi (D-CA), who previously claimed that fighting the “climate crisis” is a “religious thing” for her, has reportedly shelled out more than half a million dollars on private jets since 2020, Fox News reported Sunday.

Federal Election Commission (FEC) campaign filings reveal the congresswoman paid Advanced Aviation Team more than $437,000 between October 2020 and December 2021 and over $65,000 to Clay Lacy Aviation, according to the report.

“Private jets are notoriously bad for the environment, producing significantly more emissions per passenger than commercial flights. Pelosi’s campaign spent $67,605 on private air travel just months before she said she viewed tackling the climate crisis as a “religious thing,” the report continues.

In September, Pelosi faced backlash for claiming the United States should partner with communist China to tackle climate change even though China is currently committing genocide against the Uyghurs.

She said in part:

With their military aggression in the South China Sea, with their continuation of genocide with the Uyghurs in Xinjiang province, with their violation of the cultural… religious priority of Tibet, with their suppression of democracy in Hong Kong and other parts of China as well – they’re just getting worse in terms of suppression and freedom of speech…

Having said all of that… we have to work together on climate. Climate is an overriding issue and China is a leading emitter in the world – U.S. too, developed world too – but we must work together. We have to have a level of communication – whether it’s COVID, whether it’s terrorism or whether it’s climate. 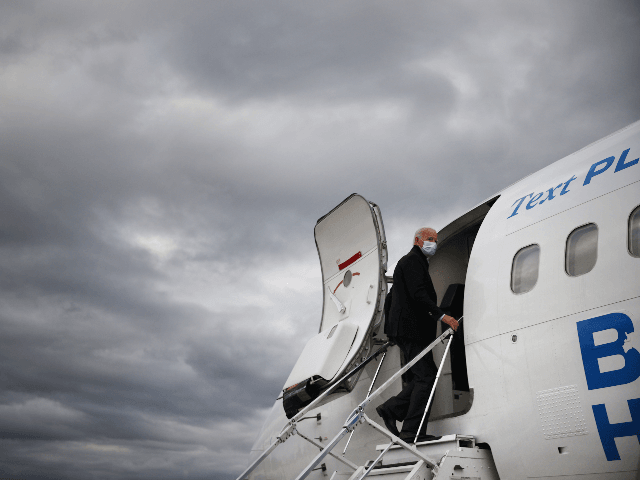 “The Democratic National Committee (DNC) has also been vocal about climate change and being “committed to curbing the effects of climate change,” but they have paid out hundreds of thousands of dollars to Advanced Aviation Team in recent years,” Fox News found.

John Kerry, Biden’s “climate czar,” ironically traveled on a private jet to Iceland in 2019 to accept the Arctic Circle award for climate leadership. At the time, Kerry defended the move, claiming that taking a private jet was “the only choice for somebody like me who is traveling the world to win this battle.” The outlet did the math in August 2021 and found that the Kerry family jet had emitted roughly 30 times more carbon in 2021 than the average vehicle does in one year.

Pelosi’s office did not respond to Fox News’s request for comment.