The Greens have long been arguing that they were the fourth party in British politics above UKIP because they had had more success in domestic elections, specifically for councils. This message went into overdrive in 2010 when Caroline Lucas, former MEP, was elected to Westminster for the constituency of Brighton Pavilion.

The seat was specifically targeted by the greens which has the largest number of councillors on Brighton and Hove council, although not enough for an overall majority.

But when it comes to being reelected, Ms Lucas seems to have reached the conclusion that aligning herself with her own colleagues on the council will do her no favours, as the Spectator discovered. Despite a ‘surge’ in membership to 50,000 and the party’s current leader Natalie Bennett featuring in profile interviews for national newspapers, Ms Lucas appears to be running on her own brand.

The Greens have done a spectacularly bad job on the council, with their team lead by Jason Kitcat proposing the kind of ideas more akin to a particularly left wing students’ union than an administrative body, including meat-free Monday and allowing people to identify as ‘Mr, Mrs or Mx (which means Mixter) and ‘gender neutral’ lavatories.

They have also failed when it comes to their key battleground of ‘being green’ with the council now ranking 302rd out of 326 councils for its recycling record, due in no small part to their inflexible policies which include a £50,000 fine for putting recycling in the wrong bin leading many residents to just dump all their rubbish.

Ms Lucas was also to be found on the picket line protesting against pay cuts introduced by her own party in the town hall while Mr Kitcat made the headlines for proposing a 4.75 per cent council tax increase which he wanted to put to the people in a referendum – estimated at a cost of £900,000.

They may be in the middle of a surge, claiming more than 50,000 new members but Lucas’s re-election campaign material seems to suggest that this news holds no comfort for her when it comes to facing her constituents in May, with hardly a mention of the party she used to be leader of and now represents in Parliament.

On her website, it has no mention of the Greens at all in the main section which appears on screens above the ‘fold’ with the logo hidden all the way down at the bottom of the page in the far right hand corner next to two small links for the national and local green party websites.

Green only seems to be used in the form of a colour rather than the party name or logo and this is no different in an advert for a constituency surgery in November – all though not all MPs include those because they are there to represent everyone, regardless of who they voted for.

But sources told the Spectator that pushing the personal Lucas brand forward and the party back helped to distance the MP from the cock ups her party have been making on the council.

This is by no means an isolated Green tactic: indeed Brand Nigel Farage was designed to help separate the UKIP leader from certain eccentric party members and candidates who, especially during election time, forgot that having a drink and going on social media was a bad idea. 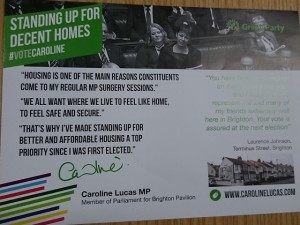 Her leaflet delivered to all households does include the green party logo, but it’s stuck high up in the corner, obscured by the image beneath.

This may be an accident by the designer, but it’s more likely that Ms Lucas has realised that if she wants to be reelected to Westminster she needs to fight as an individual rather than a party candidate in order to avoid being tarred by the brush of the town hall disasters and recently, the plethora of crazy policies the party have admitted makes up their manifesto.

When you are fighting a marginal majority, no incumbent wants to have to explain why taxing meat, sending the Queen to live on a council estate or legalising membership of terrorist organisations is a reason for voters to support them.