Ed Miliband is increasingly under threat from UKIP according to two separate studies by the Economist and by Labour itself. The Economist says that UKIP are popular wherever traditionalists live, whilst Labour have calculated just how ‘Ribena’ each of their seats are.

UKIP was once accused of being a protest vote in Tory areas, then of only being competitive in seaside towns but are now being credited with appealing to ‘traditionalists’, whichever way they voted in the past. This led The Economist to repeat the suggestions that UKIP are popular in places were fish and chips are popular.

Labour have tried to assess how purple each of their safe seats have become. They call this ‘Ribena’ in reference to the fruit drink that is deep purple in colour. They have already called in the fifty Labour MPs most at risk from UKIP, to warn them of the challenge they face.

Critically both studies have concluded Labour face a significant challenge in northern England, once seen as an unchallengeable Labour heartland. The Economist concludes that even if UKIP do not win in huge tracts of the North they will still be in a strong position. 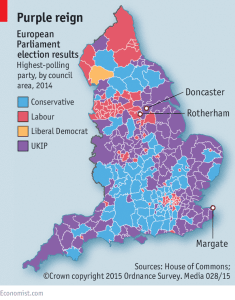 The Economist broke down who won each council area at the last Euroopean elections.

It said: “Mr Farage is doing something British political leaders rarely do: thinking beyond the next election. Matthew Goodwin, the co-author of a book on UKIP, says its strategy is to come second in some 50 or 60 northern Labour seats this May and thus be in a position to win them at the next general election.

“That explains why, though its most immediately promising constituencies are southern, UKIP held its annual conference last year in Doncaster and why Mr Farage will spend much of the election campaign touring the north.”

The magazine claims there are now three fronts for UKIP: the South East, South West and Northern England. Whereas Labour are warning that seats like Great Grimsby are ten out of ten in the ‘Ribena’ scale, meaning UKIP could win the seat in May.

According to the Daily Mirror a Miliband insider said the party was “wide awake” to the recent UKIP surge and added: “This is the most sophisticated election tool we’ve developed. We can compile risk assessments on a constituency by constituency basis – even taking it down to street by street.”

They claimed Farage was “more of a Tory than the Tories” but his popularity in seats like Heywood and Middleton would suggest he has much more appeal in working class seats than David Cameron. UKIP top brass have long claimed their big political opportunity is in the North as they had ‘run out of ordinary Tories to defect’.