Germany, which has persistently failed to contribute its agreed share of the military budgets agreed by the NATO mutual defence organisation, has neglected its own military to such a point where they now lack basic equipment – such as guns. 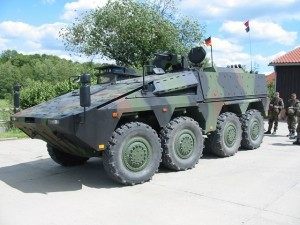 This discrepancy was farcically illustrated at a NATO joint exercise last year, which was intended to train and test the supposedly elite rapid reaction force, a collection of NATO units ready to deploy anywhere in the world at short notice to respond to crises. Despite the exercise having been planned years in advance, the Germany contingent found they didn’t have enough machine guns, and resorted to using black-painted broom handles instead.

It is now known the battalion of Panzer Grenadiers were lacking nearly one third of their machine guns, almost half of their side-arms, and almost all of their night-vision goggles.

The prospect of soldiers using broom-handles instead of issued equipment is highly redolent of the initial poor state of materiel experienced by the British Local Defence Volunteers, later renamed the Home Guard and affectionately known as ‘Dads Army’, who in the early days of the Second World War conducted rifle and bayonet drill with wooden sticks due to a lack of weapons.

German authorities insisted mounting the broom handles on their armoured personal carriers was merely a matter of subterfuge, as the vehicles had the interior space taken up by radios and command equipment instead – but this appears rather to be the latest in a long line of German military mishaps caused by a chronic lack of money.

Significant underinvestment in military equipment, poor maintenance, and a lack of spare parts have led to a number of embarrassing failures for the German military in the past few months. After deciding to donate millions of euros worth of military equipment of Kurdish fighters, the German government found itself unable to deliver it, because every military transport plane they tried to ship it with broke down on the runway.