“Ladies and gentlemen, you’ve read about it in the newspapers. Now, shudder as you observe before your very eyes that most rare and tragic of nature’s mistakes – the average man. Physically unremarkable, it has instead a deformed set of values. Notice, the hideously bloated sense of self-importance. The club-footed social conscience and withered optimism…”

This misanthropic line is delivered by The Joker in Alan Moore’s 1988 graphic novel, The Killing Joke. Widely regarded as one of Moore’s crowning achievements, it is one of the darkest contributions to the Batman series, displaying The Joker engaged in hitherto-unprecedented acts of sadism. Indeed, it was The Killing Joke that was handed to Heath Ledger as a reference point for his own magnificently deranged interpretation of The Joker in The Dark Knight (2008).

So it was unsurprising that DC comics would ask artist Rafael Albuquerque to make his homage to The Killing Joke as disturbing as possible. What was surprising – at least to those fortunate souls who were unfamiliar with words like ‘trigger warning’ or ‘safe space’ – was the backlash he received.

Kicked off by a Tumblr post, a horde of offendatrons descended onto social media to demand that DC comics “#changethecover”. Their grievances were many. They argued that the allusion to The Killing Joke, in which Batgirl is shot and crippled by The Joker, is at odds with the current happy-go-lucky incarnation of Batgirl. They claimed that no male character would ever be placed in a similar state of victimisation. They claimed it glamourised sexual assault.

This probably makes you, like the Joker, feel a little misanthropic. But don’t worry. Reddit users quickly got to work dismantling these arguments. The #changethecover hashtag was also quickly co-opted by the sensible majority. As I have written before, the landscape of social media has changed rapidly over the past year. The professionally offended can no longer take it for granted that they will be in the majority.

The cover was changed, not because of the will of the fans, who were overwhelmingly opposed to the confected outrage, but because Alburqueue himself requested that the cover be pulled. It’s a shame that an artist could be so easily cowed by a little bit of moral panic, but I suppose not everyone can be a Moore or a Tarantino.

Indeed, there was a time when the entire comic books industry decided to censor itself over a moral panic. In the 1950s, following an enormous boom in the industry, comic books came under sustained attack by the left-wing psychiatrist Fredric Wertham. His 1954 book The Seduction of the Innocent claimed that comics with themes of violence and criminality were leading to an upsurge in juvenile delinquency.

His book sparked a panic among America’s middle classes which saw thousands of comics bought up and burned by concerned parents. A congressional inquiry into immoral themes in comic books soon followed. 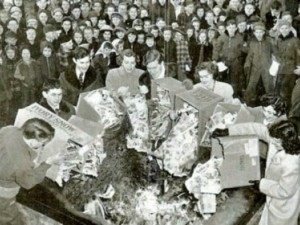 After years of pressure, the comic book industry opted for a course of action that would doom it to decades of mediocrity. Its leading publishers created the Comics Code Authority, demanding that all its artists adhere to a stifling set of standards. (Here’s a fun game: see if you can spot anything in the Code that would appeal to today’s outraged activists.)

The Killing Joke celebrated how far the comic industry had come from the days of the code. “Gruesome illustrations” are on virtually every panel. Despite being more sadistic and evil than ever, The Joker was also humanised via a new back story – a big no-no under the Comics Code.

Incidentally, that last example highlights the fact that many of DC’s critics are plainly unfamiliar with the material they are criticizing. Their claim that male characters would never be made helpless, or placed in a situation of sexual humiliation, is disproven in The Killing Joke itself.

Critics of the variant cover claim that it is out of whack with the current incarnation of Batgirl. But Batgirl was always an empowered happy-go-lucky character. That’s precisely why her helplessness at the hands of The Joker made such an impact with readers. Like the death of Aerith in Final Fantasy VII, or Lee Scoresby in The Subtle Knife, it is always the loss of likeable characters that hits hardest.

Almost every cultural product that depicts violence against women has been the subject of a social media panic in recent years. Grand Theft Auto, Mortal Kombat, Game of Thrones and even Minecraft have had to deal with backlashes for allowing female characters to face similar levels of violence to male characters.

This neo-chivalry is almost worse than the morality police of the 1950s. At least back then they were egalitarian enough to avoid restricting their concerns about violence to one sex. Nevertheless, the objections to Alburqueue come from the same gut reactions against “nastiness” that fuelled the panic of the 1950s.

Today, the left-wing language of “trigger warnings,” “safe spaces” and “empowerment” has become a vehicle for the old values of the Comics Code. The fragile, easily-traumatised audience must be protected from disturbing content, goes the thinking.

Superheroines must always win: “empowered” characters can never be shot, or hurt, or victimised in any way. And, naturally, sexuality and nudity is once again a target and must be stamped out.

The parallels between the new puritans and the old has not been lost on comic book fans. A new Reddit community to monitor the reemergence of moral panic is aptly named WerthamInAction, after the old 1950s crusader. Comic book artists themselves are also beginning to realise the danger, with some beginning to rally around Danger Girl creator J. Scott Campbell.

They have an uphill struggle ahead of them. The resistance to the new culture police is not as organised in the world of comic books as it is in gaming or sci-fi. Artists and fans also face the additional problem of an industry dominated by Marvel and DC, two cautious corporate giants who are terrified of controversy and eager to court the good opinion of fashionable left-wing blogs.

Nevertheless, if #changethecover is any guide, the world of comic books is once again facing the threat of cultural vandalism. If artists do not wish to return to the days of kitsch inoffensiveness, they would do well to grow a backbone.