BOSTON, ENGLAND: It might only be down the road but there is a world of difference between Grimsby and Boston. For a start, there are people at the local market, where stalls sell local flowers and vegetables from the surrounding farms which have been a primary source of income for centuries.

But like Grimsby, it’s also a key target seat for UKIP where they hope that their candidate, Robin Hunter-Clarke, will become the youngest MP amongst the party’s winning candidates and possibly, the ‘baby of the Parliament’. In last year’s European Elections, the party secured a huge 52 per cent of the overall vote – the highest in the country.

He might only be in his twenties, but he’s already been a county councillor for two years and certainly appears to have a mature head on his youthful shoulders when it comes to dealing with local constituents. He listens conscientiously when a local man comes in for what appears to be a 10 minute rant to get his angst off his chest. And while I, and one of his campaign team, try to hide our smirks, he keeps a totally straight face when told that people “aren’t going to come to Boston because there are no toilets!”

But there is a key reason why UKIP have become so popular in the constituency of Boston and Skegness, and that’s the large influx of Eastern European migrants and the rising unemployment amongst local people. That and the fact that the local hospital accident and emergency ward is under threat of closure from the Tories, I’m told.

People just don’t believe them when they say that the hospital won’t be downgraded,” Hunter-Clarke tells me. “We already know there are private meetings going on behind UKIP’s back and one of their councillors who sits on the health committee for Lincolnshire flatly refused to rule it out.”

It must be quite refreshing for a UKIP candidate to not just talk about immigration, especially when the party has been facing endless accusations by Labour in particular that its policy is to privatise the NHS.

But of course immigration, and all that goes with it, is the bread and butter of Nigel Farage’s party – taking the debate from something people were too scared to talk about for fear of being branded a racist to the top issue across the country and something even the Labour party like to make passing references to dealing with.

In Lincolnshire, it’s the agricultural work which was attractive to large numbers of migrants looking for work at a wage they couldn’t earn back in their own country.

“Back in the 1950s and 60s people who came to this country integrated into British society,” Hunter-Clarke says, once again reminding me of the old head on young shoulders, because his grandparents must have been only his age back then and he a twinkle in the milkman’s father’s eye.

“But now the reason we have tensions is because such large numbers came over when the borders opened and set up their own communities separate from the locals.”

That’s something you can experience just by walking around the high street. The Lincolnshire bakeries with their stands, and people selling cakes and cut flowers are all busy with locals chatting about where is best to plant this and what bread is new this week. There’s even a lady selling eggs featuring pictures of the happy chickens that produced them, which had me thinking that if that happened in Grimsby the hen would be leaning against a lamp post with a fag in its mouth. 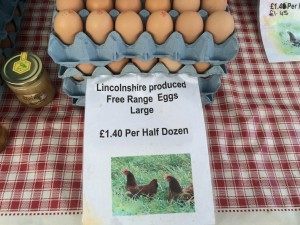 But the other stalls: the ones selling sweets and cans of coke and cheap clothing are all frequented by groups of younger people, mainly men, speaking in a language I assume is from East of Germany.

“Labour created a benefits culture” he continues. “But local people used to do the work the migrants now do, and the locals are left wanting to work but they can’t get the jobs anymore. That’s why our policy is that local jobs go to local people first, and if they can’t be filled then we can advertise them elsewhere, like Australia do.”

I ask about unemployment figures, because the shops seem to be busy and the streets are clean: Boston has the air of a town which is holding its own as well as it’s fair share of historic buildings including a rather Gothic church looking over the town centre. 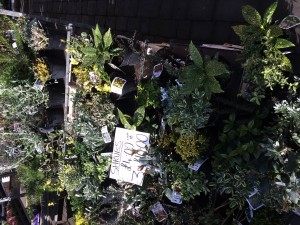 Agriculture is at the heart of Boston’s economy, but even that is drifting away.

But it might be just the number bustle of market day creating that illusion, because apparently all is not well.

“Unemployment figures are skewed because there is a lot of seasonal work in Skegness,” he says, before explaining to this Southerner that Skegness is in fact a holiday destination when he sees my confused face. “And of course the curse of zero hours contracts or fake apprenticeships which are just really an opportunity for cheap labour for unscrupulous businesses.”

So not only do they have the right demographic in this constituency, the party also don’t have to deal with the advantage an incumbent tends to have since the Tory MP, Mark Simmonds, is standing down citing amongst other reasons that he was unable to live on a Ministerial salary.

“He’s mainly in London – he only pops up here on a Friday” says the UKIPper – a point which clearly irks the candidate who is being promoted as ‘Skegness Born and Bred’. “In fact, around here he’s called the MP for Central Africa because he spends all his time abroad.”

The main rival for the seat is Simmonds’ replacement, journalist Matt Warman whose link to the area, I am told, is that his in-laws live nearby.

“People aren’t impressed that the Tories have parachuted a candidate in” he tells me, although I suspect he himself is delighted since it gives him the chance to hammer home his own local credentials. Mr Warman’s job also prevented him from giving a speech at the local Chamber of Commerce event last week: “He thought it was more important to be at the launch of the iWatch” he adds – although again I suspect this clear demonstration of his rival’s priorities played straight into UKIP’s canny campaign team’s hands.

But Warman has the advantage of being from the party that the villages around Boston would traditionally support as well as having a few years on the UKIP hopeful – however shallow that seems. Given the shameless buying of the grey vote by parties borrowing the future earnings of the young who seem completely disinterested in how MPs are spending their money on their better off parents, perhaps there is a real advantage in having a candidate who comes from a generation who had to pay tuition fees and won’t automatically be able to buy their own house.

And once again, I find myself asking why people would vote for any party which has failed to undertake the basic infrastructure changes needed in order to get the proper private investment which is needed to turn the economy around, rather than the ‘here today, gone tomorrow’ state funded renewable energies the Tories are determined will be the answer to the unemployment problem. It’s not as if the concept of a train line or roads which aren’t blocked by farm traffic are beyond the wit of man, even if that man is a politician.

But whether it’s a rough Labour heartland or a Tory market town, it is evident that UKIP have managed to cross the boundary between left and right in terms of attracting support. The two constituencies I have visited look completely different to me, an outsider. Yet they are suffering from the same problems and are currently represented by rival parties. It would certainly be a coup for UKIP if the voters of Lincolnshire sent two UKIP MPs to Westminster in May.

As I make for home one thing does strike me: why is it that the seaside towns of Eastern England are so good for UKIP but as one travels across the country, support undulates? Could it be that the party has managed to solve the ‘North-South’ Divide and replace it with the other two points of the compass?