The Conservative Party’s oldest think tank, the Bow Group, has endorsed UKIP in seats the Tories cannot win. The Bow Group’s chairman, Ben Harris-Quinney, made the announcement in an email to the group’s 10,000 members on Monday.

Mr Harris-Quinney admitted a Conservative majority “is now very unlikely to happen”. The support was welcomed by Nigel Farage, who remains very keen to bring in Conservative defectors. 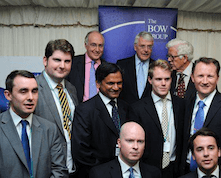 The Bow Group was founded in 1951 and did not hold corporate views on policy matters until recently. It also boast a variety of senior Tories as its patrons including Michael Howard and Norman Lamont.

Harris-Quinney told the Daily Telegraph: “Our preference at this election is a Conservative majority, but few in the Conservative Party will acknowledge the reality that this is now very unlikely to happen, and without that acknowledgement we are sleep-walking into a Labour government.

“We recognise the need to keep Ed Miliband out of Number 10, and the best way to do this is for Conservative voters to lend their votes to Ukip, who are best placed to beat Labour in many areas.”

He continued: “It is a strategic failing that no accommodation could be made with UKIP prior to the election, but in acknowledging there won’t be a Conservative majority we have to now be realistic that the best chances of forming a conservative government lie in alliances between parties of similar values like the Conservatives, UKIP and the DUP.”

Nigel Farage welcomed the support saying: “Today’s news goes to the heart of what is going on in British politics, and reveals the truth that to keep Mr Miliband out of Number 10, people must vote UKIP.

“In fact it was the Conservative voters in Heywood and Middleton’s by-election last year that kept Mr Miliband in as Labour leader, when they should have backed UKIP. 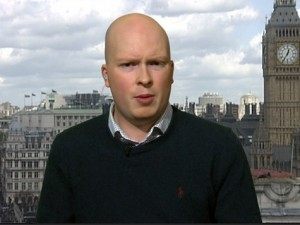 UKIP Supporter? Ben Harris-Quinney was attacked by the BBC.

“What this endorsement recognises is that UKIP MPs are critical to ensuring issues like an EU referendum, defence spending, and stopping the SNP bully are high up the agenda in the next parliament, and I welcome the Bow Group’s recognition of these facts.”

Ben Harris-Quinney was attacked by Andrew Neil and Lord Heseltine on BBC Daily Politics as a result of his support for UKIP. The chairman of the Bow Group was accused of being a “Walter Mitty character” as a result of questions over his “Presidentcy” of the Madrid branch of Conservatives Abroad.

Mr Harris-Quinney appeared on the show to defend his decision but instead faced attacks about his involvement with Conservatives abroard. Neil claimed he had been “deleted” from the branch and was not the President, as he claimed.

Later in the programme Lord Heseltine described Harris-Quinney as having been “destroyed” by Neil. Harris-Quinney said he was a conservative who sought to support “conservative causes” whenever they presented themselves, including UKIP.