The ‘Foreign Legion’ 0f the Kurdish YPG forces has always welcomed former British and American soldiers to its ranks in the fight against Islamic State (IS) terror. Now it has published a frank message on Facebook calling for new recruits from round the world to join the battle. 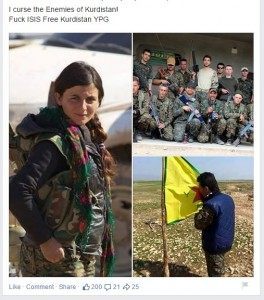 Titled “What are the requirements to join the YPG?”, the post is accompanied by a number of photographs of recruits who have traveled to the homelands of the Kurds to aid its defence from radical Islam, and of a young gun-wielding Kurdish woman.

Making no bones about the hard life of a Kurdish soldier and the scarcity of supplies:

“It would be good if you have military experience or can deal with weapons. Being sporty is very important in any case. And the most important thing is, you must be to 100% sure.

“It’s not like in the movies, it’s not a adventure – It’s the worst war against a bunch of godless Neanderthals which would slaughter you with joy & no mercy – especially if you come from the west.

“Everywhere are the decayed corpses of ISIS rats and it stinks. There is no place in Kobane where you’re really safe, so you will not be able to sleep really well.

“There is not much to eat because the fucking Turks not let that relief supplies come over the border. Medical care is also not good. Be aware that you are (if you don’t come to with a friend) ‘alone’ there. A city & people which are foreign to you. The danger; that every second something can happen (Snipers, bomb attacks, an ambush…) You could never see your family, friends & home again..

“So you must be mentally and physically ready for this.It is hard. It’s damn hard and it hurts a lot to see what happens there. Does this people not suffered enough?! A people that knows nothing but oppression and genocidal. If you are born as a Kurd, you must either fight, flee from your homeland or live under the tyranny of your occupiers.

“I curse the Enemies of Kurdistan!

Breitbart London reported on one sub-unit within the Lions of Rojava in March, which is entirely comprised of British, Canadian, Australian and American soldiers. One member of this ‘Chappie’ unit was former Royal Marine Konstandinos Erik Scurfield, who became the first Briton to be killed fighting against the Islamic State earlier this year. One of his American comrades said of his death: “Kosta volunteered for every attack and guard duty opportunity. He wanted nothing more than to bring the fight to the enemy.

“I’m going to carry on your legacy brother, I will never forget you. I love you man”.