Police are reviewing allegations against a newly elected Conservative Party Member of Parliament after claims that he helped a UKIP challenger by providing him with intelligence and even campaign material to win over Labour swing voters.

Police in Hampshire are investigating the claims that Royston Smith, recently elected for the Conservatives in Southampton Itchen.

The constituency has been held by the Labour Party since 1992, and its high profile candidate, journalist Rowenna Davis, had hoped to inherit the seat from the long-serving John Denham, the former parliamentary private secretary to Ed Miliband.

But Davis was thwarted by Smith, who it is now alleged, helped the local UKIP candidate to swing voters from Labour to UKIP with useful maps, local election results, and even a Tory-designed leaflet highlighting Labour’s failures on immigration.

The Guardian reports that Kim Rose (UKIP) received 55-pages of information from his Tory counterpart, which he claims helped him take 4,000 votes from Labour on May 7th. Given that Mr Smith only won the constituency by 2,316 votes over Labour – it may well prove to be the assistance towards Rose that helped him seal the deal. 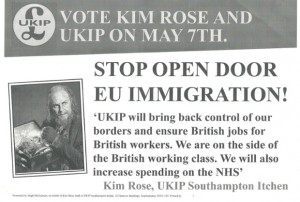 The leaflet provided to Mr Rose by Royston Smith

Smith has already admitted assisting Rose, but stopped short of confirming that he had handed his opponent canvassing data – that is information gleaned by the Tory campaign that identified voting preferences on the doorstep or via telephone calls.

A core part of Mr Rose’s claims against Mr Smith include the provision of a ‘racist’ leaflet which claimed that the Labour Party let in one immigrant every minutes for the 13 years it was in government. Mr Rose said the leaflet, designed with Conservative Party resources, look “more like” it was made by the BNP. He called it “totally racist” as it contained an image of Fagin, a Jewish character from Oliver Twist.

Rose is also said to have encouraged Smith to defeat Labour. Conservative sources pointed to an e-mail from Rose to Smith which said, “Canvassed Thornhill today, all day. Labour vote diminished. Royston don’t listen to polls, you will be king and I am the king maker. Long live the king.”

Ms. Davis, the Labour candidate, told Breitbart London: “If there is any allegation or evidence of illegal behaviour, then it must be fully investigated by the police.” She had initially congratulated Mr Smith who she said “won in a fair fight”.

The incident raises questions about Conservative internal processes following an outburst by the party in the direction of Cllr Ben Harris-Quinney, who repeated Lord Tebbit’s 2013 call for Tory voters to tactically vote UKIP.

The Conservative Party soon set about a crusade against Cllr Harris-Quinney, suspending  him from the party for reasons that have not yet been made clear.

That Mr. Smith worked so closely with a UKIP opponent is sure to irk Tory Central Office, as it undermines what is believed to be a key pillar in their campaign against Cllr Harris-Quinney. A Tory spokesman told the Guardian: “There was no deal and the Conservative party does not do deals with other parties”.

This, despite the past five years’ government being a deal between the Conservative and Liberal Democrat parties.

The Conservative Party was asked for comment on whether Mr Smith is likely to be disciplined for his admissions. There was no reply at the time of publication.