The Conservatives are already facing a humiliating climb down over the European Convention on Human Rights as a leading advisor has said it will not be possible to ignore rulings from Strasbourg unless the UK withdraws completely.

It means that prisoners may soon have the right to vote, despite David Cameron saying the prospect made him “physically sick”, the Telegraph reports.

Both Theresa May and Michael Gove are said to be angry that Mr Cameron will not countenance withdrawing from the convention which makes EU law superior to UK law and has caused outrage as Brits believe the rights of criminals are put above those of law abiding citizens.

The confirmation that withdrawing from the ECHR and replacing it with a British Bill of Rights was confirmed by Foreign Secretary Philip Hammond who said that action was not “on the table”.

The lawyer who advised the Conservatives on a Bill of Rights to replace the Human Rights Act, which enshrined the ECHR onto the UK statute books, said that when “push comes to shove” Britain will have to give way to Strasbourg judges.

British representatives are expected to tell the Council of Europe that it will not follow the edicts from judges in Strasbourg. But Jonathan Fisher QC said the government would have to “cede an element of sovereignty” if it wasn’t prepared to completely withdraw.

This means that rules such as prisoner voting, on which there is a blanket ban in the UK, will be decided by foreign judges not democratically elected MPs in Westminster.

“If we want to stay lawful we are going to have to cede on it [the ECHR].” Mr Fisher said.  “In terms of the law, they don’t have to do very much to satisfy the European court on this. It can be done, but the question is whether you want to do it.

“If push comes to shove, and we do something in one of our cases that the European court doesn’t like, then at the ultimate level we are obliged to follow the court’s position.

“Do they the politicians accept that whichever way you look at it an element of sovereignty is being ceded to Strasbourg in reality or do they want to pull back from that?”

Diane James MEP, UKIP’s Justice and Home Affairs spokeswoman said she had “little doubt votes for prisoners will be forced upon us.”

“The UKIP position is there should be a blanket ban of votes for prisoners. 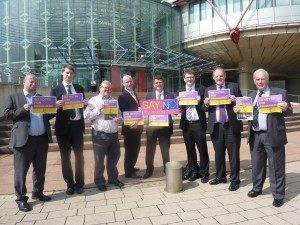 UKIP MEPs and staff protest outside the court in 2012

The problem is, if we continue to be members of the EU and as a consequence, signed up to the ECHR, the ECHR judgments trump that of our national parliament and Supreme Court

As it stands, the UK is bound by Article 46.1 of the Convention which requires us ‘to abide by the final judgment of the Court in any case’ to which we are a party.

If the ECHR does force the UK to give votes to prisoners it will be a huge slap in the face to the British democratic process and once again signals the UK cannot escape this ECHR supremacy while we are signed-up members of the EU.”

Mr Cameron has insisted the decision on prisoner voting should be left to Parliament, where MPs have opposed lifting the ban.