Tony Blair and Nigel Farage need to step away from headlining their respective campaigns in the EU referendum, according to a survey for think tank British Future.

Polling results seem to show that the two men risk harming their own cause – something which was anticipated with the former Prime Minister given the negative headlines which follow him everywhere he goes and the huge distrust following Britain’s involvement in Iraq.

The numbers have been published on the 40th anniversary of the 1975 referendum which was the last time voters had a chance to voice their opinions – although the debate then was engineered towards a trade agreement rather than the political union the EU has become.

The findings highlight how the high profile characters on both sides may be turning off the very ‘undecided’ voters they need to persuade with Farage appealing hugely to existing supporters but not the undecided members of the population. But he is more popular and trusted than Tony Blair who don’t like him whether they are ‘in’, ‘out’, ‘decided’ or ‘undecided’.

The poll reveals 59 per cent of people distrust the former Prime Minister when he talks about whether Britain should remain in the EU, and only 28 per cent say they trust him on the issue. Mr Blair is even distrusted among those who share his political viewpoint on Brussels, with only 42 per cent of ‘in’ voters trusting him compared to 46 per cent who don’t.

Mr Farage  also has ground to make up, with 54% saying they don’t trust him on the EU debate, and just over a third of the public (36%) saying they do. But the UKIP leader has a huge advantage over Mr Blair in that 74 per cent of those definitely voting ‘out’ trust him and they will be the grassroots troops which the campaign will rely on to reach the whole of the voting population.

UKIP say they are not especially concerned about the findings. A spokesman said that no politician is ever universally popular and the ‘no’ side always planned to run a cross party campaign involving a variety of different voices.

And they point out that Mr Blair has no legitimate mandate, whereas Farage leads the party which secured almost four million votes at the last general election.

“With over 70 per cent of the public still not fully decided where they stand on the question of Britain’s membership of the EU, there’s everything to play for,” a UKIP spokesman told Breitbart London.

“UKIP is currently polling around 13 per cent and Farage is trusted by 35 per cent of people on the question of our EU membership, which is a good base to start on.

They added, “Nigel was never going to be the only voice for out: that was never the plan.” 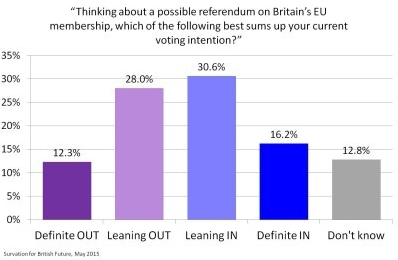 The important results from the survey are that 70 per cent are still undecided and waiting to see what deal David Cameron can strike with the other EU leaders. Most have a preference but have not concerned, being dubbed ‘leaners’. Amongst this group, the Prime Minister is the most trusted voice, which will make his work on renegotiation key to how both sides decide to play the campaign.

A spokesman from British Future said, “With just 16% saying they are ‘definitely in’ and 12% ‘definitely out’, the race remains wide open for both teams in the EU debate. It is the ‘Leaners’ and ‘don’t knows’ who will decide whether Britain stays in Europe: the side that reaches this group with its arguments may turn out victorious when the ballots are counted in 2016 or 2017.”