Namdakov is reported to be “upset” and “disappointed” to see pictures of the statue being used as a shelter and makeshift bed, and his son told the Evening Standard they had hopes Westminster council would be moving the migrants on: “It is obviously an unfortunate situation but we are hoping it will not be for too long and it can be sorted out”.

One of the migrants using the statue was bullish in his defence of their presence, telling the paper: “We are not stopping people from enjoying the sculpture. We are just here. We are looking for homes and jobs but this is where we will be. We aren’t moving”. He said his friends thought the marble base “comfortable” and convenient, as it provided them with shade from the sun.

The statue itself was unveiled last month and drew immediate comments about its demonic appearance – despite purportedly being symbolic of female strength and a desire to care for the young. London events blog Now Here This reviewed the installation as “London’s most terrifying new statue”, with Time Out’s art editor remarking “It’s Rodin meets Ridley Scott, in a bad way”. 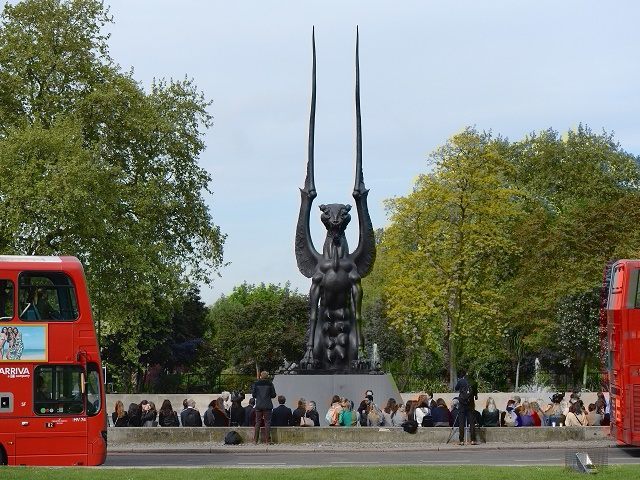 London’s She Guardian with double-decker bus for scale / Getty