A shocking document comparing the benefits available in various European nations given by people traffickers to potential ‘clients’ has been revealed by Danish integration minister Inger Støjberg.

A file, which reads like a price comparison site for asylum seekers and illegal migrants, compares European nations like Germany, Holland, and Sweden on key areas including how long the migrant has to stay in the country before they can legally have their family move to join them, what type of government-funded accommodation is available, and how high unemployment benefits are. Danish integration minister Inger Støjberg revealed the document in a Facebook post arguing for Denmark to cut its handouts to asylum seekers to make it less appealing, reports TheLocal.dk. 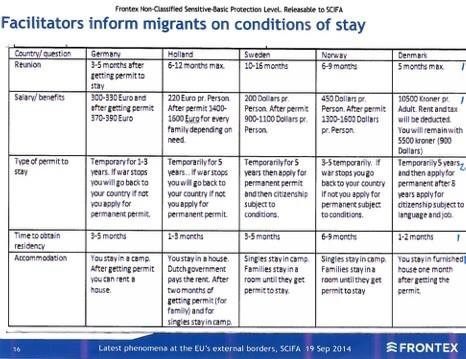 She said the document was uploaded by people traffickers to a website where illegals shopped around to decide where they wanted to be smuggled to. Støjberg remarked that the level of knowledge illegals had about their level of entitlement was so complete that asylum seekers were arriving from half way across the world at Danish asylum centres already knowing even how many towels there could expect to receive free from the state.

The document itself is an official European Union comparison table created by the Union’s own border force, FRONTEX, and used in a number of briefing documents about mass migration. A spokesman for Frontex has claimed the organisation is unsure whether the document highlighted by the Danish minister is ‘still in circulation’ among migrants and the people traffickers who enable them – a remarkable claim considering it is easily found, along with other helpful information, through Google searches.