A novelty globe sold at Poundland shops in the UK and Ireland displays “Palestine” where the State of Israel should be featured. The £1 Mini Globe, described as a “unique desk accessory” was bought at a London branch of the budget chain store on Kilburn High Street. 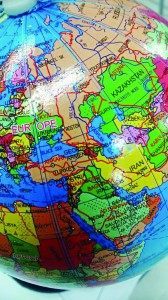 The globe, no Israel to be seen @JewishNewsUK/Twitter

Jewish News reports the flawed geographic aid is also featured on the Poundland website. There it is promoted by the cut-price retailer as being a “great novel stationery product perfect for any school or university student” – although presumably not one wanting to gain a rudimentary knowledge of actual real-life geography such as the existence and location of the State of Israel.

“The globe features a key on the underside which includes a number of countries including Israel. However, we are investigating the product further with our supplier to determine if improvements could be made. We would like to thank the customer for bringing this issue to our attention.”

No explanation has been given as to why the novelty children’s globe, distributed by Birmingham-based company H&O, endows Palestine with full nation state status rather than Israel.

The omission of the State of Israel on the Poundland globe comes in the same week that Air France announced it “deeply regrets” the technical problems which led to Tel Aviv, Jerusalem and Israel itself being “glaringly absent” from passengers’ computerised flight path screens.

The Air France maps, since corrected, did feature Cyprus, Lebanon, the West Bank, Gaza, Jordan and three Egyptian cities, which led some to ask “whether Air France has succumbed to the BDS (Boycott, Divestment, Sanctions) campaign to delegitimize the Jewish State by literally wiping it off the map.”