A Bradford based charity will now only be helping genuine refugees near Syria after they woke up to the fact that those in the Calais “Jungle” camp are almost exclusively fit young men, who are “happy” to be there and not fleeing danger.

The charity was tired of unwanted donations being left to spoil by the economic migrants.

The Human Relief Foundation (HRF) has been generously running a project to help the “refugees” based in Calais, previously claiming they were all “fleeing war and significant atrocities.”

However, on a recent visit HRF’s deputy chief executive Kassim Tokan and his team discovered unwanted clothing and food being “dumped and burnt” by the migrants.

“I thought they have valid reason, but most of them they haven’t any valid reason… they want to go [to the UK] to get money, a better economic situation,” Tokan told ITV News.

HRF will now refocus its efforts on help Syrians trapped in neighbouring Lebanon and Jordan.

He said migrants told him, bluntly, that they were quite happy to stay in the camp. “There is no point in staying here… Syrian people in Jordan have a much better life,” he suggested. 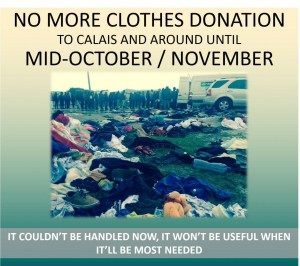 He said that 95 to 97 per cent of the people he observed in the camp were young, fit men – despite the BBC misleading the general public by featuring children in over 50 per of their pictures of the migrant crisis, as exposed by a Breitbart London analysis.

Tokan adding: “They have enough food, they have enough clothes and we have seen clothes everywhere thrown. I think we need to find other places. These people come from certain countries, which are safe, everything is there, they can work, but I don’t know why they came here.

The British public has been enthusiastically giving to the “refugees” in Calais since the story first entered the media, including 700 planning to ride there on bikes in single weekend.

However, tons good were being wasted and left in mud, and at the begging of September charities pleaded for people to stop sending goods as they were “overwhelmed,” asking for money and mobile phones instead.