Germany will import 1.2 million completely unskilled migrants this year, many of whom will go straight onto unemployment benefits, according to a leaked government document.

Among the revelations is that fact over 80 per cent of migrants have no qualifications, the majority are under the age of 45, and the agency expects 400,000 new benefit claimants next year to be migrants.

Leaked to the German weekly anti-establishment paper Junge Freiheit this week, but ignored by the national mainstream media, the document optimistically insists that despite the enormous cost of migrants to the country it was good news. Writ-large across the last slide of the presentation, they claim: “The integration of refugees is a chance for BA and society as a whole. But all must stand shoulder to shoulder”.

The golden opportunity for BA to turn the migrant crisis to its advantage may be one reason for their optimism. As the document explains, the sheer number of new unemployment benefit applications that will need processing and managing means the agency will have to employ 3,500 new staff.

The new claimants and the staff come with a cost, estimated to stand at €855 million next year (£620 million) in addition to the €35 billion already budgeted for 2016. The additional cost includes €640 million for benefit payments and €65 million for new staff — convenient empire building for the agency at a time of national crisis. 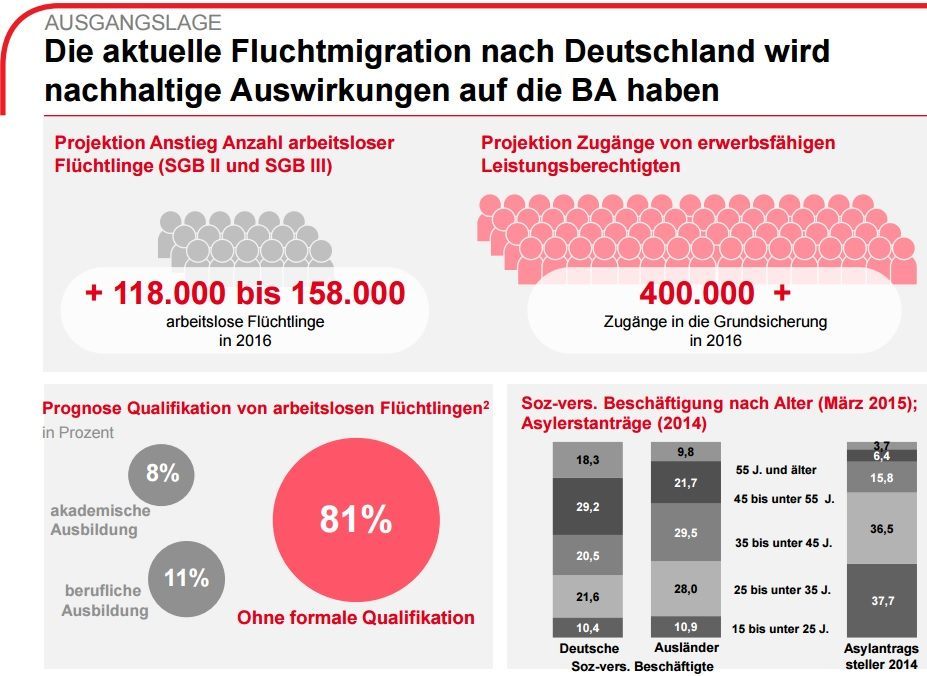 Many of these new employees for the agency will be migrants – a neat fix to get new arrivals off the unemployment claimant count while still taking a salary from the state. The document even gives the experience of one such migrant, ‘Abdoulaye N.’, a 40-year-old from Niger, as an example of good practice.

Being funnelled through the agencies early intervention programme, he was found a job at the Dortmund office as a “mediation specialist” for his fellow refugees. Similar employment programmes exist in European basket-case Sweden, where the national migration agency is growing at a rate of 100 employees a month – many of which are freshly arrived migrants.

Many migrants will be more difficult to find jobs for – a fact the agency privately admits in the document. According to the figures laid out in infographics for the presentation, those arriving are overwhelmingly young and uneducated.

Just eight per cent of migrants have any kind of academic qualification, while 81 per cent have none at all. If Germany received 1.5 million migrants, as the present — if rapidly ascending — figure has it, that means some 1.2 million people will arrive in the country without a level of education even as high as a school leavers certificate.

The document also provides comparison between the age profiles of arriving migrants and native Germans. While in the ordinary population 32 per cent of citizens are between the ages of 15 and 35, among the migrant arrivals that figure is 73 per cent.

The figures strongly contradict previous claims by the German Federal Office For Migration And Refugees, which made the claim that arrivals were in fact on average more highly educated than their new German neighbours, not less.

Far from 90 per cent of migrants being educated, as has previously been claimed, these new figures seriously question the notion that Europe is being flooded with a new generation of ready to work doctors and lawyers.

When approached by Breitbart London for comment, the Federal Employment Agency confirmed the document was genuine but would not comment on how it came to be released, and insisted the information contained was not “secret”.