LONDON, United Kingdom – Breitbart London‘s Editor in Chief Raheem Kassam squared off against Jabeer Butt OBE, the Chief Executive of the Race Equality Foundation, for a fiery debate about migration, multiculturalism, and the latest Office for National Statistics figures that show Britain’s population growth over the next 25 years being driven by migrants.

Mr. Butt claimed that without migration, Britain would never have had retailer Marks and Spencer, nor would it have had the Mini (car), which he said was developed by a Polish migrant. It was actually developed by a Greek, though it is not known if Mr. Butt thinks “they all look the same”.

Kassam rubbished the claims that a large retail firm like M&S could not have been invented by a native Brit, but brought the topic back to the ONS report from this morning, which revealed that contrary to what Prime Minister David Cameron and his government have been saying over the past 24 hours, migration is indeed affected by Britain’s EU membership. 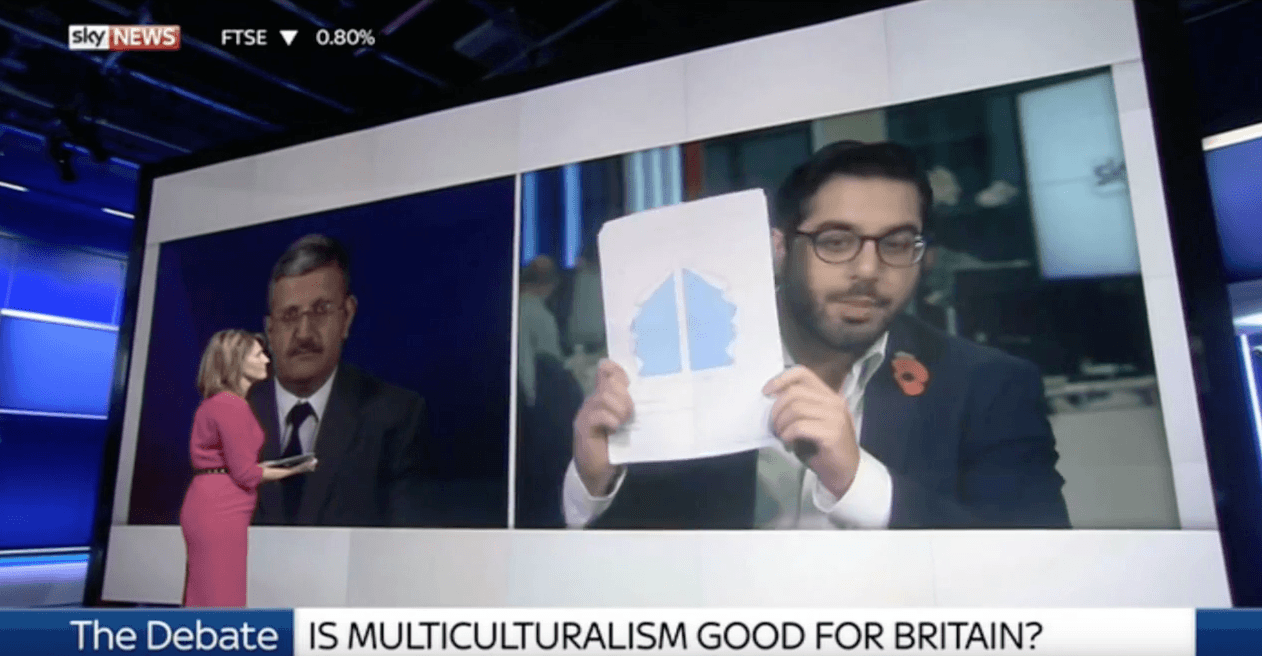 Kassam holds up the figures

Mr. Butt responded by intimating that Mr. Kassam was a “racist” and said he was “ignorant and ill informed”, despite clearly having not read the report himself. He said it was a “fallacy” that British national infrastructure was impacted by mass migration, and said that the number of people coming into Britain was a good thing because there are more young people fit to work and help the older population.

Mr. Kassam replied: “I’m not sure if Mr. Butt has looked at the report today. He talked about the numbers of young people in this country as a result of mass migration. He said we’d get more. Well here they are,” Kassam said, holding the report page up: “They’re not much more.”

“So we can talk about ill-informed all we want and we can imply racism all we want, I won’t have it. My parents were immigrants to this country when migration was in the tens of thousands. And I’m proud of this country’s history,” Kassam said, pointing to the poppy on his lapel, commemorating the lives lost in British wars, “and what this country has achieved and what it will keep going on to achieve with controlled immigration.

“Let’s not skew the debate in terms of racism… this is the liberal left’s way of shutting down the debate,” Kassam added, concluding: “We want people to afford houses, we want people to be able to send their kids to a school with not overpopulated classes, we want our NHS to be able to flourish and serve the people that genuinely need it… My question for Mr. Butt is… why don’t you want any of those things for this country?” 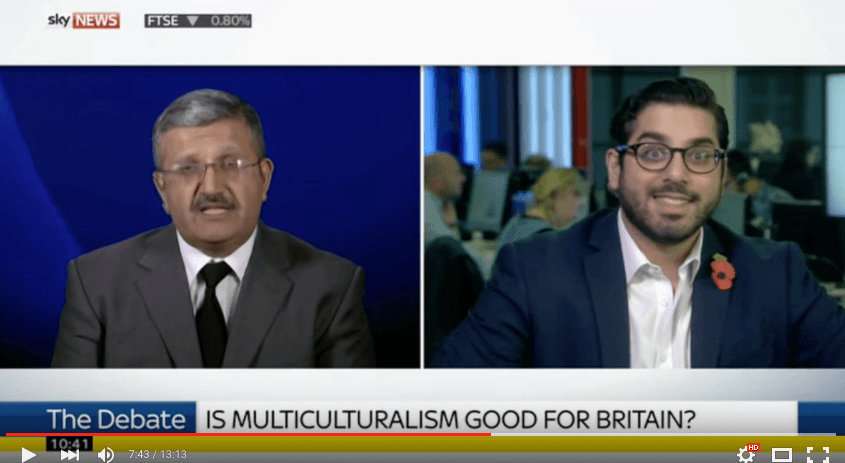 Kassam, exasperated, demanded, “Stop talking about race! Most of the people coming into this country are white people from Europe, the real racism is our European Union membership that discriminates against brown people… stop talking about racism, it’s a complete non-sequitur… what we’re talking about is the figures.

“I don’t understand why someone like Mr. Butt – who is a professional diversity consultant… I’m not really even sure what those people do on a daily basis – can go on television and accuse someone like me of racism, who stands up for this country and controlled immigration of racism.”

Mr Butt tried his own wit out, joking, “The reality of someone who runs a website insulting me as a diversity consultant is quite cheering really… [migrants] transformed Britain and will continue to transform Britain. This kind of focus on just the numbers… is actually an error.”

Mr Butt was asked, since he said he believes in controlled immigration, what cap he would put on the numbers.

“Well it’s actually very difficult to put a number on there. The reality is that we’re in a changing situation… we’ve seen in Germany… we need to create a safe society for everyone… if that means taking on more migrants at this time then that’s what we’ll need to do.”

Kassam shot back: “If you look at the ONS statistics today – I notice Mr. Butt isn’t talking about them very much… they show that the UK population will continue to grow even if we have zero net migration… now nobody’s arguing for zero net migration, we’re talking about bringing it down to the tens of thousands, so we will still have population growth… [Mr Butt] won’t put a number on how many people he wants coming to Britain every year, I’ll say it, I think net migration should be in the tens of thousands. What’s Mr. Butt’s proposition here?”

Mr. Butt said, “The reality is that kind of comment doesn’t really understand [sic] how Britain has developed for hundreds of years.” He cited French refugee migration to Britain, claiming, “Britain has been a multicultural society since the Huguenots arrived.”

But Mr. Kassam actually knew the numbers, and said: “The Huguenot immigration… was 50,000 people over 100 years. We’re now talking about net migration into this country running at nearly 400,000, I imagine we’ll see in the next twelve months. You talk about fostering hatred and everything like that, actually what happens when people come into this country en masse and they ghettoise, and I’m happy to take Mr. Butt for a walk around somewhere like Tower Hamlets, well that’s what breeds division and the problems of modern society. You only have to look at places like Rotherham where police officers were scared to address the grooming and rape gangs… because they were scared of being called racist – by people like Mr. Butt who will play the race card whenever they can to try and paper over the cracks of their flimsy arguments.

“I think we should have a grown up debate about migration in this country,” Kassam concluded. “we’ve got to get away from these smear tactics by pro-mass migration activists… let’s just cut that out of the equation, please.”