Before I knew what coffee was supposed to taste like, my friends and I used trot off to my nearest Starbucks almost every day (we thought we were très sophistiqué) after school, filling our gullets with 500 calories of “skinny” caramel macchiati (that’s the plural of macchiato, don’t cha know?) with extra cream and perhaps an extra shot or two of coffee and caramel.

I mean really – what is that? I reckon a Quarter Pounder and a large chocolate milkshake would have been healthier. Of course I was très sophistiqué so I would have probably ordered a Royale With Cheese.

Now of course, I have no cause to go to Starbucks, although I can happily admit to shoving a Royale with Cheese into my gob after a particularly frivolous night out.

But I did go this morning, after seeing a Facebook post by a colleague of mine pointing out what Starbucks’ newest “Red Cup” looks like. For those unfamiliar: one of Starbucks’ greatest marketing gimmicks is changing the colour of their cups from white to red every Christmas. I myself remember excitedly declaring to an ex-girlfriend how red cups heralded the beginning of Christmas (sorry, Peter Hitchens).

Yes, I was, as most people are, seduced by modern, mass-marketing, which has trounced traditionalism and replaced it with corporate logos and non-threatening jingles. And today I returned to my old, caffeinated Mecca (and the crowds made it feel like I was on the Hajj, too).

And what I found was deeply disappointing to 17-year-old, macchiato-chugging me. The Red Cups (do I need a trademark symbol after that?) are now an anti-Christmas symbol, with Starbucks declaring their formerly Christmassy cups to be “holiday beverages” and shedding any sign of Christmas from them.

Have a look at what Starbucks Red Cups over the years looked like:

To the right is the 2009 offering. You can see distinct elements of Christmas, even if that means Christmas in a modern sense.

They lean heavily on stars (you know, like in the Nativity Story) and the background resembles the branches of a Christmas tree. All in all, a pretty good and acceptable design for something that self-defines as a Christmas-orientated product.

But 2009 was a long time ago, and since then the company has slowly, but definitely, moved away from Christmas, and Christian iconography.

To the left here, you’ll see the 2010 offering. Snowy, seasonal, at least it resembles something mildly festive and Western.

The same applies to the 2011 red cups, which have a dog sledging down a hill on the back of a snowman, snowflakes falling around them. It’s cute, really.

They stuck with snowmen for 2012, with a big one winking at you with a star in the background that year, and a sort of upmarket stars and baubles motif on their 2013 cups.

And then it all went south. Or east, maybe.

2014’s cups looked like a child scrawled on them with a marker pen. And not in a cute way. It was a distinct shift away from looking “Christmassy” (see right) before the monstrosity they’ve released this year (below).

And behold, Starbucks did conceive and bear a red cup, and called his name blasphemy: 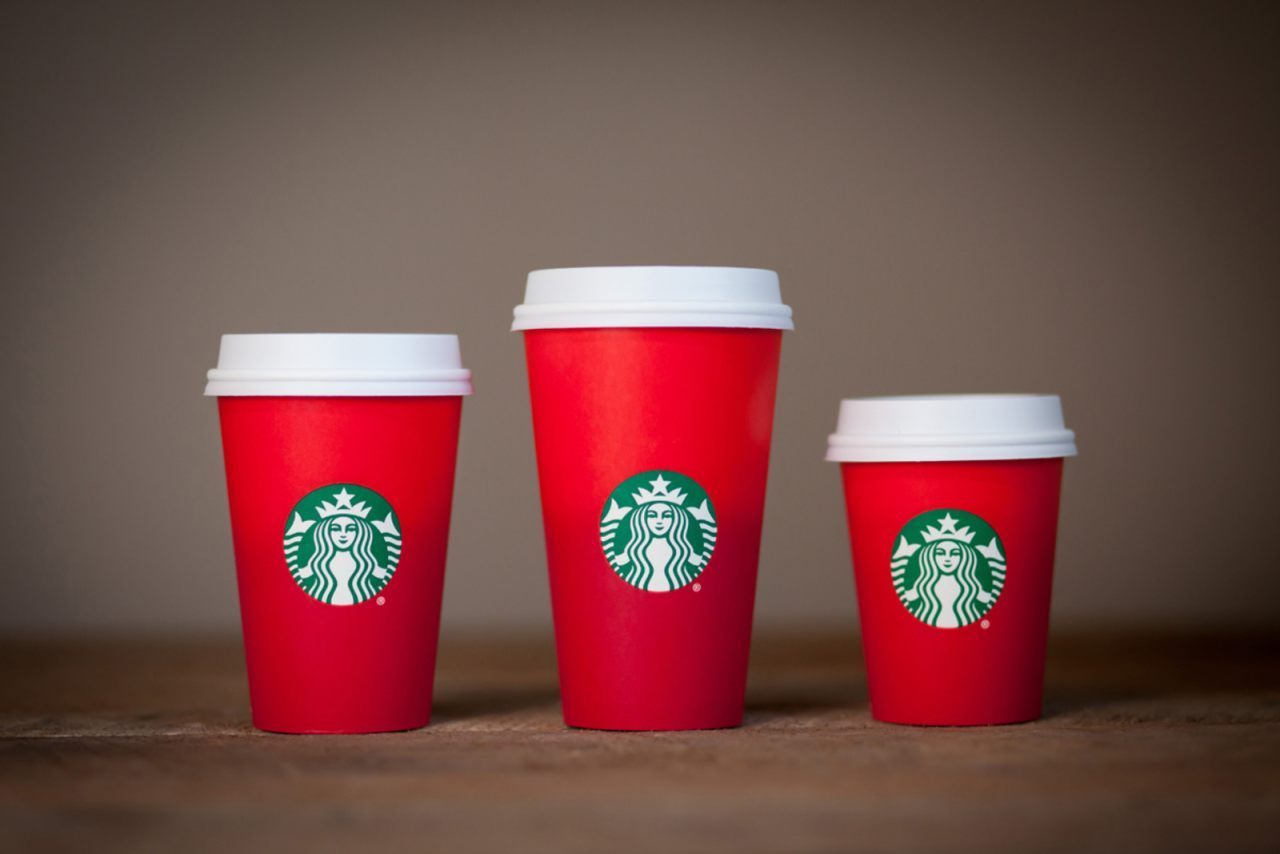 I asked Starbucks why, but they just sent me a “factsheet” with their latest flavours and a link to their website where they’ve talked about wanting “to usher in the holidays with a purity of design that welcomes all of our stories.” 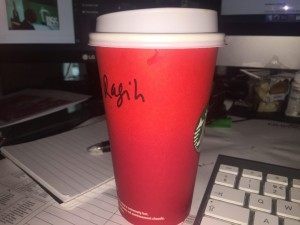 “We’re embracing the simplicity and the quietness of it. It’s [a] more open way to usher in the holiday,” said their CEO.

You can see what’s going on here. More open? You mean, you’re trying not to “offend” anyone.

Frankly, the only thing that can redeem them from this whitewashing of Christmas is to print Bible verses on their cups next year.

Not that I’d buy their burnt coffee anyway. And certainly not while they keep spelling my name “Ragih” (right) on their cups.

“But Ragih,” I hear you say. “Why do you care about what Starbucks is doing anyway? It’s crap coffee and none of us buy it.”

Sure, but plenty of people do. And subliminally, they’re being told/reminded that this time of the year is no longer about Christmas. It’s about the colour red, or something. It’s a “holiday season”. Don’t say Merry Christmas. It’s offensive.

And no, I’m not “reading too much into it”. This is happening. And it’s as disgusting as an Eggnog Latte.