After months without a breakthrough, David Cameron will finally give more details on Tuesday of what reforms he wants for Britain to stay in the European Union before a looming referendum.

Nearly three years after promising a vote before the end of 2017, the British prime minister will deliver his shopping list in a letter to EU president Donald Tusk, which is expected to be made public.

The letter comes ahead of a crunch European summit in Brussels next month and amid hopes that the British referendum on whether to remain an EU member state can be held next year.

Cameron will warn in a speech Tuesday that if Britain’s concerns are met with a “deaf ear”, he will have to “think again about whether this European Union is right for us.” “I rule nothing out,” he will add, according to pre-released extracts.

His Europe Minister David Lidington told journalists last week not to expect too much new detail in the letter, adding it would be “ambitious” to hope for a deal at December’s summit.

“My advice to the prime minister has always been don’t publish a detailed negotiating position,” he said.

He also highlighted that there would have to be four months between any deal being agreed and the vote being held, for legislative reasons. 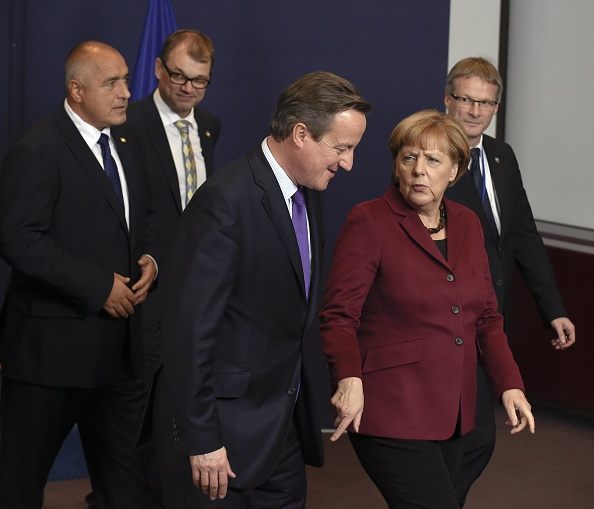 Gabriel Siles-Brügge, a politics lecturer at Manchester University, said Cameron had always been “a bit vague” in his demands because he is carrying out “a difficult balancing act”.

“He wants to appease eurosceptics in his own party while avoiding Brexit (British exit from EU). But he is of course now being pushed by EU leaders to concretise his proposals,” he told AFP.

A failure by Prime Minister David Cameron, pictured with European Commission’s president Jean-Claude Juncker (R), to achieve what he wants over benefits would be particularly damaging to him and the Conservative party

“That may lead to the former being disappointed because the proposals aren’t intended to push Britain towards Brexit but rather to allow him to proclaim a symbolic victory over Brussels and campaign for continued membership.”

John Springford of the Centre For European Reform highlighted that Cameron first promised a referendum in 2013, when the anti-EU UK Independence Party was surging and his position looked shaky.

His Conservatives subsequently won a House of Commons majority in elections this year while UKIP managed to win just one seat.

“The strategy was a political one, designed for domestic political reasons,” he added. “I really don’t think Cameron went into that speech with a clear view of what reform he even wanted from the EU.”

In recent weeks, European partners have put increasing pressure on Cameron to lay out in more detail what kind of reforms he wants.

He has long identified four broad areas where he wants to see reforms — improving competitiveness, greater “fairness” between eurozone and non-eurozone nations, sovereignty issues including an exemption from the aspiration of ever-closer union and making it harder for migrants to claim benefits.

Experts say there is room for compromise in all areas except migration, where Cameron wants to stop EU migrants, including those in work, from claiming certain state benefits for four years after arriving in Britain.

“In the UK, this is one of the key issues if not the key issue as far as the public is concerned,” said Stephen Booth, co-director of think-tank Open Europe.

“Other EU member states have to be aware that if they are unable to accommodate UK concerns, it could certainly have an effect on the campaign here.”

This will be particularly tough to achieve agreement on because of non-discrimination principles in EU legislation.

A failure by Cameron, who has said he will step down as prime minister by 2020, to achieve what he wants over benefits would be particularly damaging to him and his centre-right Conservative party.

“The public doesn’t care about ever-closer union,” said Springford. “The EU is still quite low down on the list of priorities. Immigration is much higher.”