Climate change activists at the United Nations COP21 environmental summit have been condemned for wrecking the public memorial to the Paris attacks victims.

Over 300 climate change activists, left-wing extremists and fellow travelers were arrested yesterday as violence broke out in the Place de la Republique, the square that has become the focal point for locals intent on expressing their unity and solidarity with the Paris attacks victims.

At the square’s centre stands a statue of Marianne — a national symbol of the French Republic — which has become a makeshift shrine.

Bouquets, candles and other objects have been left there by those paying their respects to the memory of the dead of both the recent Paris attacks, and of January’s Charlie Hebdo and Jewish supermarket killings.

Yesterday, however, those objects became ammunition for rioting activists defying a ban on public protests imposed as a result of the recent Paris attacks. Activists were intent on attacking the police, reports The Local. 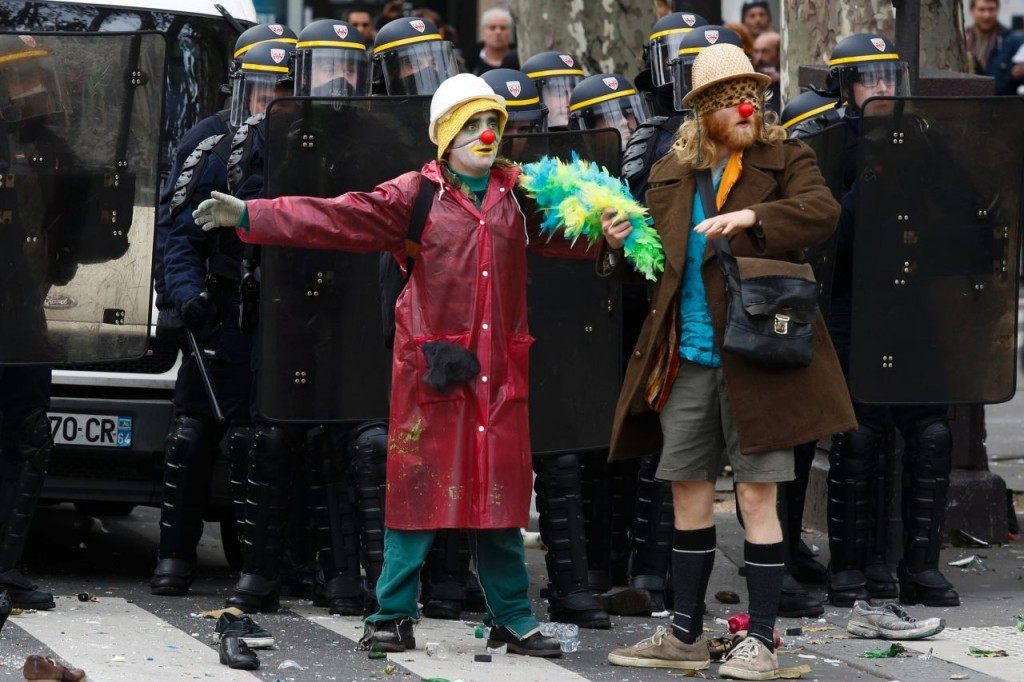 Protesters dressed as clowns stand in front of police as demonstrators clash with police during a rally against global warming. (FLORIAN DAVID/AFP/Getty Images) 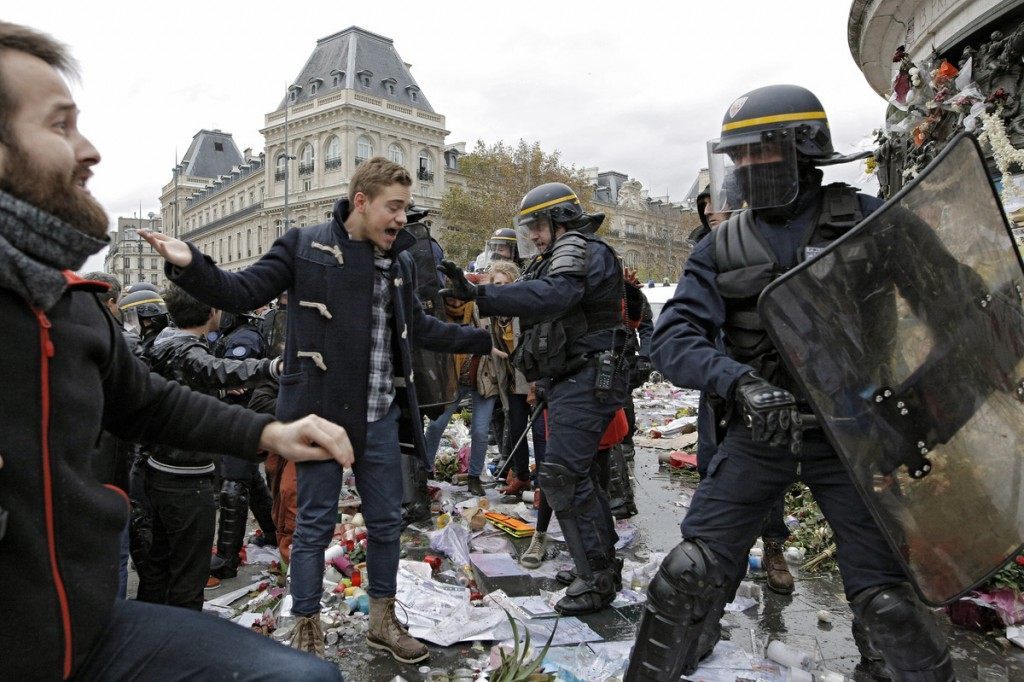 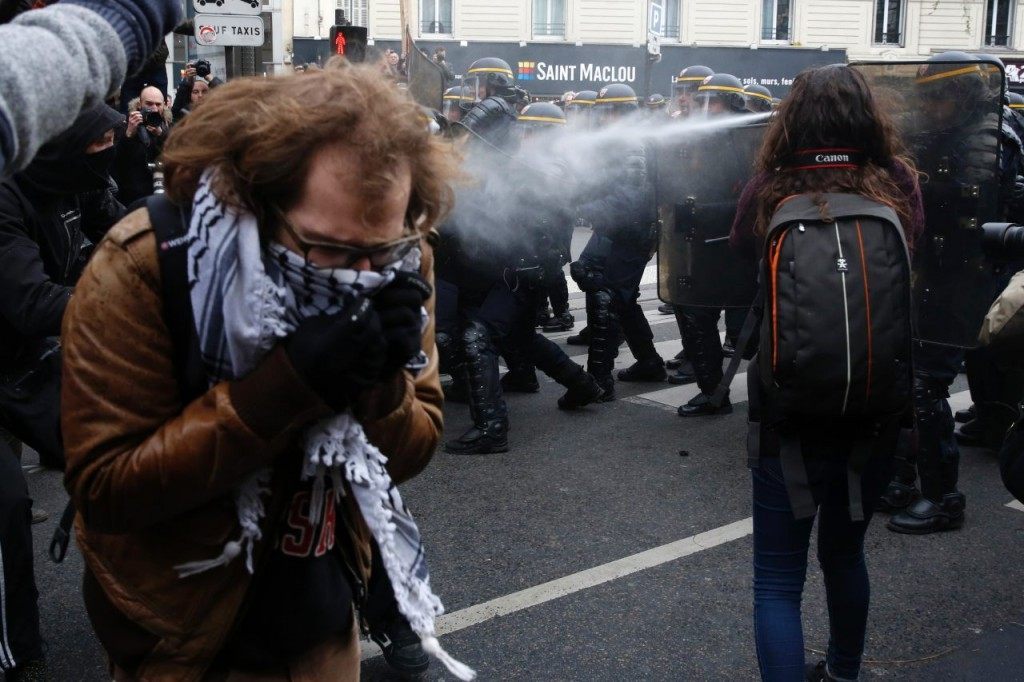 President François Hollande condemned the behaviour of far-left protesters, labeling it “scandalous” and demanding severe punishments for those involved. 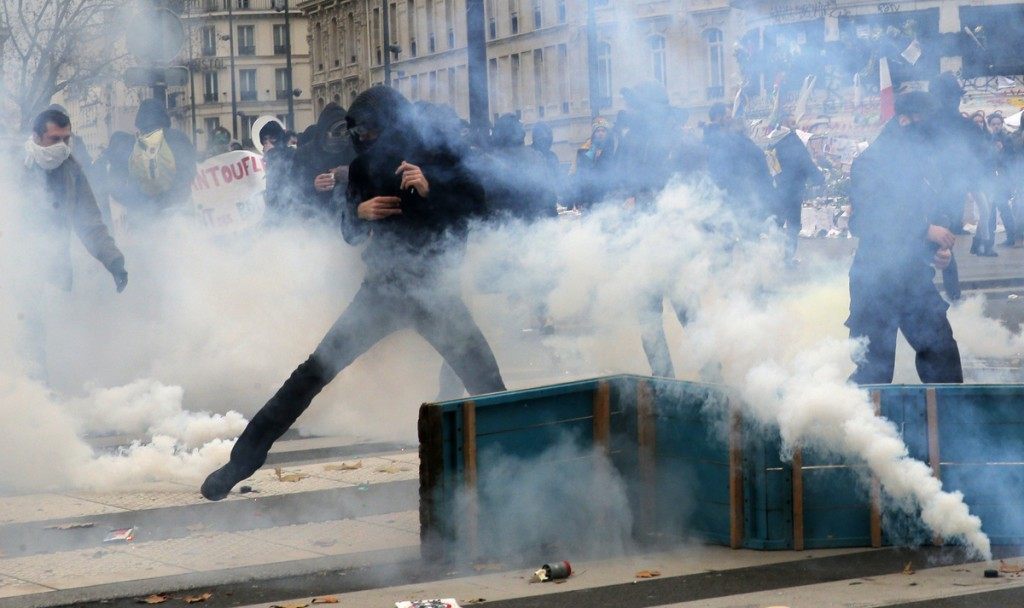 Shocked by the rioters’ willingness to loot the memorial for objects to throw at the police, Bertrand Boulet, a member of the ’17 Plus jamais’ group which looks after and maintains the memorial, said he “felt sick” about the incident. He added:

“It’s indecent, a desecration. The statue is the tomb of the victims of the attacks… We maintain the monument every week. This belongs to all French people.”

Police today published photographs illustrating the range of objects that had been thrown at them by the radical protesters. As well as obvious weapons such as rocks, a hammer, broken glass and a petanque ball, the pictures showed candles taken from the memorial and a square littered with flowers, posters and messages also removed from it.

It has also emerged that some of the rioters simply wanted to vandalise the memorial, setting fire to parts of it.