Earlier this morning Michigan Congresswoman Debbie Dingell took to Fox News (above) to declare that “Steve Jobs was a Syrian”. Obviously, that’s a massive fib. And a “racist” one too, as Ms. Dingell’s assertion relies on forcing the children of immigrants to maintain their parents’ country of origin as a national identifier. It also flies in the face of the ideas of integration and assimilation.

But should we be surprised? Ms. Dingell represents Michigan’s 12th Congressional District i.e. the city of Dearborn – a place where around 50 per cent of the population is “Arab-American” (see how they put the Arab first? I made note of that interesting linguistic trick here) and where she relies on the immigrant vote for re-election.

But the whole world seems to be on a “Steve Jobs Was Syrian” kick at the moment – almost as if this were planned. 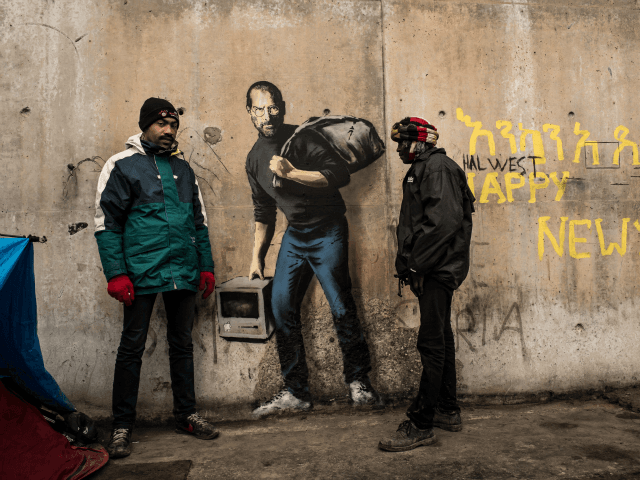 Banksy’s Steve Jobs As a Syrian Migrant In Calais (Getty)

The theory was floated shortly after the Paris Attacks, as it became clear to the mainstream that perhaps Europe and the United States’ open arms to Syrian migrants wasn’t such a good idea (I’ve been banging on about this for months).

But even the left-leaning Snopes.com website pours scorn on the assertion that Steve Jobs was a Syrian, or rather, that his father was a Syrian “refugee”.

Jobs’s background is complex, and yes, his biological father was in fact a Syrian from Homs.

But what people like Banksy – the self-aggrandising artist who painted Mr. Jobs as a Syrian refugee in the Calais migrant camp this week – won’t tell you, is that Mr. Jobs’s biological father was in fact the son of a millionaire, who moved to the United States not out of necessity, and certainly not out of persecution.

He was an economic migrant – not a refugee – evidenced by the fact that he later returned to Syria with the intent of joining the country’s diplomatic corps.

And he was an economic migrant at a time when net migration into the United States stood at around 250,000 people a year. Today you’re looking at around 1 million people a year – and that’s just legal immigration.

Nevertheless, let’s look to what Abdulfattah Jandali (Jobs’s father) himself has said: “Steve is my biological son, but I didn’t bring him up, and he has a family that adopted him”.

That family was Paul and Clara jobs – who Steve Jobs always called his parents – not his “adoptive” parents.

Paul Jobs was a former U.S. Coast Guard turned repo man. Clara appears to have been a housewife. But while Mr. Jandali is gracious enough to have said “I really am not his dad. Mr. and Mrs. Jobs are, as they raised him. And I don’t want to take their place”, the same cannot be said for the Democrat politicians who want to force the label “Arab American” or even “Syrian” onto Steve Jobs.

And there are couple of scenarios to consider, if we’re going down the avenue that Congresswoman Dingell insists we do.

Firstly, Mr. Jandali was a pan Arabist activist who even spent a few days in prison for his political work. Pan Arabism is the idea that there should be one, massive Arab state that spans across North Africa and the Middle East – remind you of anything?

Sure, scholars will point out that Pan Arabism didn’t have roots in Islamism – and was even conquered or eclipsed by it. But it is interesting to note that some have stated that “ISIS arises as a group that demanded a Nation-State in Middle East… ISIS in its ideals portrays the perfect representation of Nasser’s Pan-Arabism”.

Thusly, if Steve Jobs had not been given up for adoption because of his biological mother’s “conservative” family who refused to allow her to marry a Muslim – maybe he would have followed in his father’s footsteps? That whole “Steve Jobs was a Syrian” thing starts to look less appealing as a narrative.

And while Mr. Jandali has clearly moderated his views over the years, now claiming he is a “non practicing Muslim” but still believes “in Islam in doctrine and culture” – he doesn’t appear to be that grateful to the United States for his economic prosperity.

He said in an interview with Al Hayat, reproduced in the Saudi Gazette: “If I had the chance to go back in time, I wouldn’t leave Syria or Lebanon at all. I would stay in my home country my whole life. I don’t say that out of emotion but out of common sense. I think I’ve wasted my energies and talents in the wrong place and in the wrong society.”

And he has skewered the left’s “Islamophobia argument too: “I have never experienced any problem or discrimination in the United States because of my religion or race”. Though his advice to the next generation of immigrants is basically to use the American education system and then go back to where they came from:

“I advise young Arabs coming here, however, to get a university degree and not prolong their stay, as there are lots of opportunities in the Arab World today, particularly in the Gulf. The good minds of the Arab world must stay there, as they might be able to help their countries there more than they can here.”

It may be a side note, but it’s also amusing to read that Jandali’s university magazine reported that he was the leader of “The Al-Urwa Al-Wuthqa Association” between 1951 and 1954. The society was disbanded after violent protests in March 1954, and Al-Urwa Al-Wuthqa is now the name of the media arm of the Nigerian terrorist outfit Boko Haram – though that is likely to be an unfortunate coincidence given the root of the phrase (a 1918 book about Islamic jurisprudence).

Finally, if conservatives ever hear “Steve Jobs was a Syrian” – they might want to reply with this little nugget of information, based on his family background.

His biological mother, Joanna Schiebe, fell pregnant with Mr. Jandali’s baby out of wedlock. Her father was intent that she not marry a Muslim, and at the time, abortion was illegal. So, the pair gave Steve Jobs up for adoption.

But had abortion been legal at the time, as per Jeffrey S. Young’s “The Journey Is The Reward” early biography of Mr. Jobs

“Adoption in those days was a much more prevalent occurrence than today. The stigma of single parenthood was intense, and abortion was a dangerous and illegal back-alley operation”.

So could it be that had abortion been freely available in the United States in the 1950s, we would have had no Steve Jobs? Well, it’s more credible than calling him a “Syrian”.