An apparently British jihadist has appeared in an Islamic State propaganda video executing five of his fellow countrymen, accusing them of spying on the Caliphate.

The new video shows the unidentified man, who speaks with a British accent, threatening UK Prime Minister David Cameron before killing his hostages, reports The Independent. 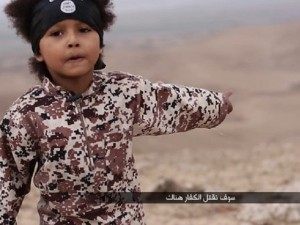 Addressed as a “message to David Cameron”, who the narrator calls an “imbecile” “arrogant and foolish”, and “slave of the White House”, five men in the customary orange jumpsuits now so strongly associated with execution in the Islamic State kneeling. Remarking the men have been “abandoned” to their fate by the British government, the men speak confessions to being spies before being shot in the head.

The film, which has yet to be independently verified but it being treated as a legitimate product of the Islamic State’s own propaganda arm by the SITE Intelligence Group, closes with a shot of a child in Islamic State uniform who like the narrator also speaks in a recognisably British accent pointing off-screen and saying “we will kill them over there”.

The Islamic State has not been shy to distribute high video quality films of executions to further their propaganda aims. In addition to execution by firing squad, enemies of the Caliphate have also been filmed being roasted, exploded, and even run over with captured Iraqi tanks in videos that have shocked and sickened the world.

The graphic videos have become a meme in of themselves, with rival groups even adopting the HD-video execution themselves. Breitbart London reported in July 2015 on a group of 18 caputred Islamic State fighters being executed at gunpoint by a rival Islamist Gang, who turned the tables on the usual format by wearing orange jumpsuits as their executioners uniforms.