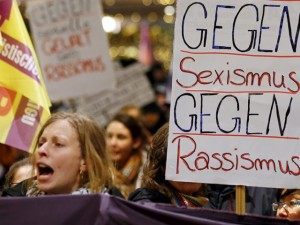 Last night’s protest in Cologne. ‘Against sexism, against racism’ / Reuters

Locals are standing up against the loss of their city to migrant gangs, and the politicians who apparently treat citizens with contempt for opposing the change.

German counter migration movement the Patriotic Europeans Against the Islamisation of the West (PEGIDA) have called a mass protest for this Saturday afternoon at the square outside the railway station where the attacks happened.

Announced within the past few hours, the march is likely to attract thousands, and not just of long-standing PEGIDA members, but also of ordinary Germans and the citizens of Cologne.

For many, the realisation that the German mainstream media and government have been apparently colluding in the cover-up of migrant sexual violence has provided a sudden and rude political awakening. 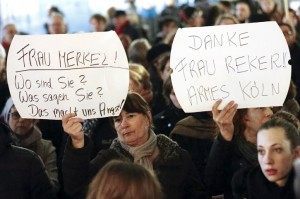 PEGIDA protests in the past have fielded upwards of 30,000 marchers to protest the Islamisation of Europe, and have been characterised by the broad cross section of society who have joined their ranks

Also in the pipeline for Cologne is a demonstration by the emerging Identitarian movement. With a membership mainly comprised of young, middle class, students and educated professionals, the movement has in the past staged mock Islamist executions to highlight the dangers of mass migration, and even sent groups of volunteers to the borders of Europe to help build fences.

Separate from these organised groups, a spontaneous people’s protest took place last night in the Cologne cathedral square, which was depicted in a number of viral videos shared on the internet as a riot of migrants throwing fireworks and jeering passers-by. 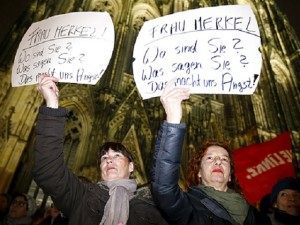 While Cologne police were unable to field enough officers to repel the migrant attackers on New Year’s Eve, dozens of police vans were pictured lined up along the square to respond to the peaceful meeting of an estimated 300 banner-carrying locals.

The protest is understood to have been hastily organised by a local women on Social media just hours before they met. After meeting in the square the group marched through the railway station.

Placards and signs contained a number of messages, some criticising the migrants for violence, others politicians for their actions. Some opted for sarcasm, with one hand-drawn card declaring “Thank you, Mrs. Reker!”, a reference to the newly elected pro-migrant mayor of Cologne who in a press conference yesterday refused to criticise migrants but said women should be more careful to not make themselves targets for migrant sex violence.

Another sign was a message to the German chancellor, which read: “Ms Merkel, Where are you? What will you say? You are scaring us.” In Germany it is said the migrants are the personal guests of the chancellor, who has been the main political driving force behind their arrival. This is a point that has even been acknowledged by a German judge, who last year ruled that migrants who committed crimes in the pursuit of entering Germany could be forgiven.

He said: “Given the conditions at the frontiers, the legal system has been suspended by the German politicians, therefore no unconditional prison sentence is given.

“Asylum seekers are invited by the German Chancellor to come to Germany”, as reported by Breitbart London in November.