Remember Britain’s most famous former Guantanamo Bay detainee, Moazzam Begg? He’s the head of the CAGE organisation that called Jihadi John (the old one, not the new one) a “beautiful young man“.

Mr. Begg’s reputation precedes him on any number of matters, but I thought it was important to bring the following claim of his to your eyeballs. Because not only is it hilarious – it’s also kind of true.

Mr. Begg – speaking at the now famous (thanks to our very own Liam Deacon) ‘Quiz a Muslim’ event – remarked on how the Islamic caliphate, which is currently being implemented in the Levant by the Islamic State, is no different to the European Union.

He notes: “Europe has strived despite hundreds of years of war between all the various nations and races that exists on this tiny continent… they’ve got it… they’ve got a European Union. Why the hell can’t we have one in the Muslim world? It was all united anyway. 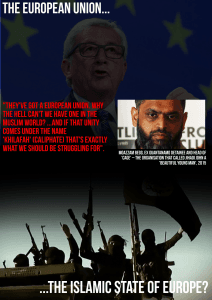 It could REALLY take off!

“If you look at the maps they’ve all been divided by [inaudible] rulers that have carved up the Muslim world. So they should be united and if that unity comes under the name ‘Khilafah’ (caliphate) that’s exactly what we should be struggling for”.

Really keen on the migrant invasion of Europe? Check.

Ok – so the parallels probably end around there (I’ve yet to see Jean Claude Juncker crip-walking down the Rue du Luxembourg with a machete threatening to behead Nigel Farage).

But it’s fascinating to see how the Islamists justify the creation of the Islamic caliphate, and the lengths to which they’ll go to propagandise on behalf of it, even here in England.

And I reckon it would make for some pretty good anti-EU leaflets on the run up to the referendum (this summer?) to have a former Guantanamo detainee whose organised lauded Jihadi John quoted. I even made you a prototype (above right).