As a metaphor for the German state having rings run around it by barely literate, violent migrant gangs the image of a police car up on bricks having had its wheels stolen is a powerful one.

This is the cover of the latest edition(€) of Der Speigel, the high circulation, high brow news magazine which is this week questioning the Federal government with the emboldened headline ‘State Impotence’ — a play on words leaving ‘State Power’ in black text and the modifier in white. 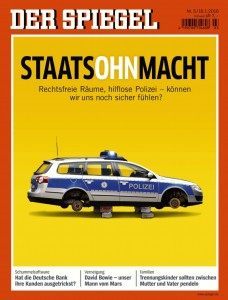 One of a number of news outlets set up by the occupying British army in the aftermath of the Second World War to provide media for the new post-Nazi Germany, Der Spiegel has grown to become one of Europe’s most important and influential magazines. The latest edition paints a bleak picture of Germany where the government has failed to discharge its basic duties of protecting the citizen, and even looks to a future solution without Chancellor Merkel.

Becoming increasingly isolated from her colleagues in the ruling coalition — despite grabbing more executive power for herself — Der Spiegel paints a picture of a withdrawn, angry leader. Comparing the chancellor to her attitude weeks ago at the fortnightly Republic governance meeting where she was an enthusiastic participant, these days “Merkel types listlessly on her mobile phone, or looks around annoyed to the ceiling. So quickly the world can turn”.

While the strongly worded editorial conceded government will always be in for criticism, either for being too strong or weak, it sets out in Germany today there is “too little. Not enough police, too little border control, too little integration. An insufficient state”.

Remarking that a decade ago the nation state seemed “doomed” by the unstoppable march of “neoliberal” globalisation demand for good national government has made a “remarkable comeback”, claims Der Spiegel. Yet is is in no condition to lead a nation competently, it reflects:

“Now there is a hope. The nation state is needed, but he is in poor condition. He could not protect the oppressed women in Cologne, he receives the influx of refugees that is out of control. He can provide no good framework for life in Germany, but he must. The challenge now is to create a good state”.

That the magazine is left-leaning and pro-migration, make the accusations made in this edition all the more remarkable for a mainstream German publication. 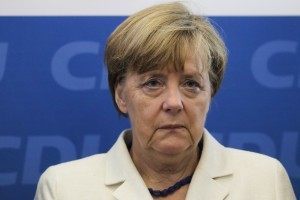 Chancellor Merkel’s popularity has been waning over the course of the migration crisis, according to polls.

While the magazine concedes the migrant sex assaults in Cologne and a host of other European cities has “strengthened doubts” about the Chancellor’s migrant policies, and that the other nations of the European Union (EU) don’t share Germany’s enthusiasm for mass migration, it still looks to the Union for the solution. Despite the EU’s open borders having been one of the greatest contributing factors to the crisis, the magazine still calls for the EU to stand in as a substitute for the nation state, as “individual countries are too small to maintain themselves in the globalised world”.

Der Spiegel also joins in criticism from a number of German politicians and legal experts who have spoken out against Merkel’s unilateralist action on inviting over a million migrants to Germany in just one year, with some even calling her policies “unconstitutional”. The DerSpiegel  editorial opines: “Chancellor Angela Merkel has welcomed the refugees, but now lacks a concept of how many people can be integrated. It also lacks a functioning concept of how the flow of refugees can be contained. If this continues, it is a glaring failure of state”.

There may be no easy fix for Germany’s new one million un-integrated inhabitants, but the Chancellor needs to take action immediately, or the country will move forwards without her, suggests an article on the fractious governing coalition which is being racked by the migrant crisis. As the headline opines — ‘The clock is ticking’.