Hundreds of parents and local residents packed-out a government meeting on Thursday night to oppose a migrant “barracks” being built on a school field.

The local municipality called the meeting to discuss plans to build a so-called “barracks” for unaccompanied refugee children in the grounds of the school, taking advantage of the municipality-owned playing field and access to water, drainage, and electricity to get the project completed quickly. 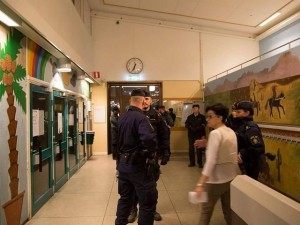 Fearing a repeat of the migrant sex attacks on children that have been recorded all over Europe in past months in their own neighbourhood, over 500 concerned citizens in the Swedish town of Haninge attended the meeting in the school hall. As more and more locals piled in, the organisers called in the police to monitor the meeting and handle the crowds, with two van loads of officers appearing as parents and residents spilled over from the school to the car-park outside.

Only residents with properties directly bordering the school field and parents of children at the school had been alerted to the plans at all, prompting a resistance committee to print up fliers for distribution to the wider community. Far from the discussion those attending the meeting were expecting the officials of the municipality announced they had already made the decision to go ahead with construction on Monday, prompting boos and shouts from the audience.

The new migrant buildings would be just meters away from the school, which provides education for 7-15 year olds, and special provision for children with Autism and Down’s Syndrome.

Political author Jan Sjunnesson was at the meeting and told Breitbart London “the atmosphere was intense, even aggressive. Everyone was very disappointed with the municipality. This came as a surprise, there hadn’t been a public debate whatsoever”.

Officers from the municipality as well as the building board and department of social affairs attempted to explain their decision to the assembled parents and neighbours but they had already lost the initiative of the evening, said Mr. Sjunnesson.

The attacks on children and young adults by migrant males of all ages were clearly at the forefront of the minds of many in the hall, which prompted some to speak strongly in the defence of their own children. Despite the police presence, one father said: “If something happens to my daughter, I will execute the man responsible, and I will kill the politician who let the migrant in as well”.

Another father promised to demolish by night whatever contractors managed to build during the day. One man said: “I have three daughters. If something should happen to them… you will have the blood on your hands”, reports Axpixlat.

While the proposed camp is for unaccompanied minors — migrants who claim to be under the age of 18 who have arrived in Sweden without their own parents — these ‘children’ have been responsible for some of the most disturbing crimes by migrants in Europe. Breitbart London reported last year on the actions of a group of unaccompanied minor children, who beat a young Swedish woman into submission into a isolated park and raped her.

Those responsible, who had told the Swedish state they were between 13 and 16 years old but during the court case were judged to have lied about their ages then phoned their friends to join them in gang raping the girl, who was left with “life changing” injuries. At least one of those responsible, who received just nine months detention for his part in the crime has now escaped and is on the run.

The problem of migrant males claiming to be unaccompanied youth in order to receive preferential treatment from the Swedish state is one theme a concerned mother at the meeting picked up on. She told the board of government officials “these are not 15 to 17 year olds, but 25 year old men”. The municipal officers retorted they were in no position to question the assessments of the Swedish migration board.

While the council had brought the announcement of the development as a fait accompli to the meeting, by the end of proceedings there were clear signs of a change in mood. Surprised by the strength of public mood over the establishment of the camp, the Haninge government have now called a second meeting for next week and put out a statement Friday announcing they would be “reconsidering” the camp.

Not that it means the local resistance to the plan has defeated it, Mr. Sjunnesson told Breitbart. The migrant youths are to be imposed on the area from above by the national Migration bureau, so the change in direction will only change the location, not the inevitability of the migrant camp. “They have an agreement with the migration agency to take 32 young Afghanis and they can’t say no. They say they can’t do anything, it is inevitable”, he said.

While these Swedish parents may have failed, for now, to defeat the national migration agency others in Europe have had more luck. Breitbart London reported this week on a group of Romanian farmers who discovered the European Union was funding a secret migrant camp in their town and organised a resistance to the plans.

Promising violence if the plans went ahead, the ringleader of the resistance told press he had lived in Paris for a year in a “predominantly Muslim neighbourhood” and didn’t want to see the same social changes France had experienced to unfold in his home town. The Romanian government cancelled the project.