A German open air museum has defended against discrimination claims after it emerged that migrants are allowed to enter for free while Germans, and even their dogs, have to pay.

A picture of prices from the Freilichtmuseum Hessenpark near Frankfurt 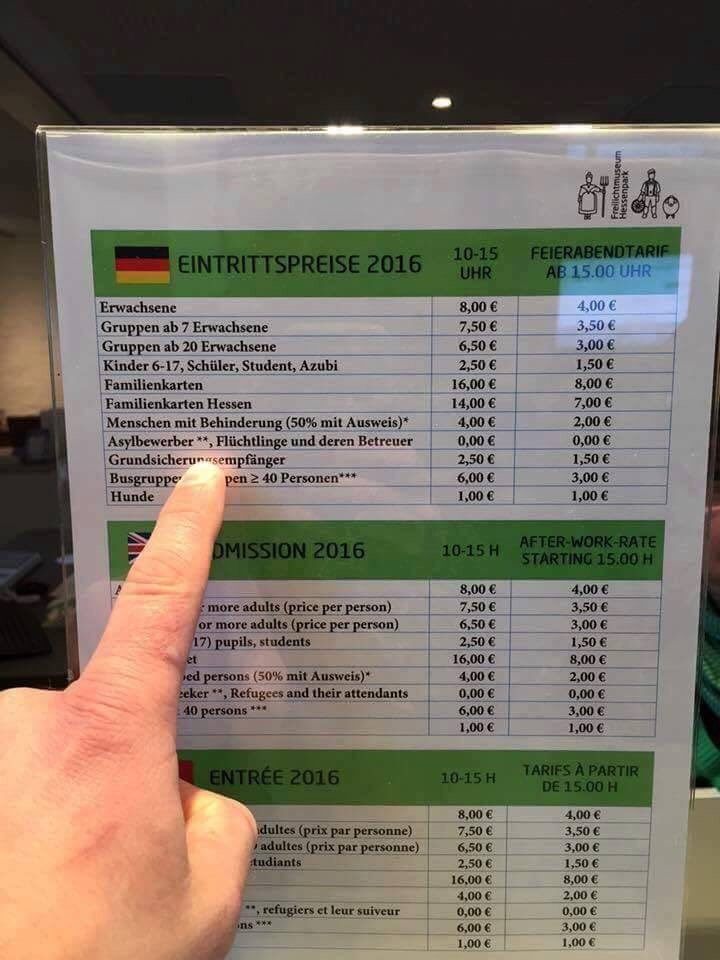 has been making the rounds on social media. The picture shows prices which are pretty straightforward with adults paying €8 for entry, and children €2.50. Absurdly, dogs have to pay €1 to enter.

But according to the image, migrants and their “helpers” get in for free.

Social media users have called for a boycott of the museum on the basis that the pricing structure discriminatory toward Germans. The reply from the museum was one of indifference:

“We regret this negative attitude, but it does not affect our decision,” they said, adding: “We stand by the decision of our Board and are convinced that no one is damaged by this regulation or is disadvantaged. Our price policy is, since the founding of the museum, fair and family-friendly: guests with children get cheap family tickets… we welcome all people who appreciate our work and support. But we can live with it [if people disagree]”.

The negative reviews talk about the absurdity that dogs, people on welfare, and even the disabled have to pay while migrants don’t. The replies to their reviews are, more often than not, a slew of abuse and name calling. Critics have been branded “racist”.

The Hessenpark museum released a press statement which added: “Hessenpark is undergoing massive hostility because accompanied refugee groups receive free admission,” but adds that since they now have 3,500 likes on their Facebook page, the majority of people clearly agree with them.

The release goes on to explain that the policy has been in effect since last year, and that they feel it is perhaps more important that migrants get a chance to experience German history than actual Germans do: “Hessenpark will contribute to the integration and set an example that refugees are welcome in Hessen. People who are immersed in a museum of history and culture of the region will thereby be able to connect to their new environment.”

Migrants in Germany receive free housing, free food, and Google has announced they will even be giving them free Chromebook computers via charities and non profits working with migrants in Germany. The migrant crisis is expected to cost Germans tens of billions and reports released by multiple economists reveal that there is likely to be no economic benefit at all for the Germans.