British police have promised not to tolerate any speech that could cause offence on social media regarding Syrian migrants, after arresting a man for Facebook comments made about recent arrivals on his small Scottish Island.

The tiny Isle of Bute in the Firth of Clyde, which had a total population of just 6,498 in 2011, is expected to take in around 1,000 Syrian migrants, with 12 families already arriving since December last year (picture above).

However, commenting on the comparatively huge and sudden influx of Muslim immigrants online just became a very risky business for local residents.

Police have confirmed they have arrested a 41-year-old local man under the Communications Act, after receiving a report of a supposedly “offensive” comment made on Facebook regarding the migrants.

A police spokesman was unequivocal, that any harsh criticism of the Muslim influx would not be “tolerated”. Inspector Ewan Wilson from Dunoon police office told the Guardian following the arrest:

“I hope that the arrest of this individual sends a clear message that Police Scotland will not tolerate any form of activity which could incite hatred and provoke offensive comments on social media”.

The offending man is expected to appear at Greenock Sheriff Court in the near future. 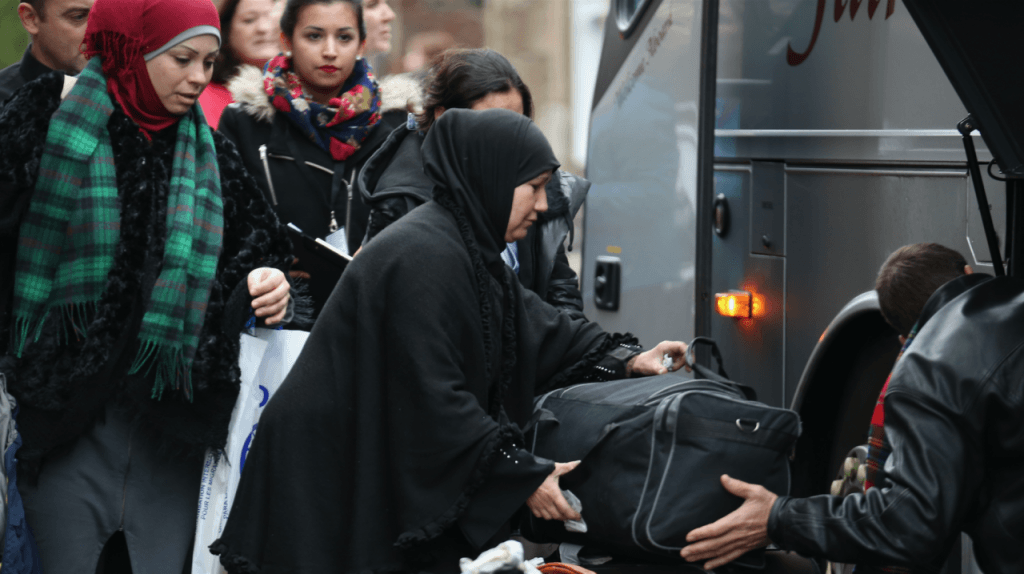 Syrian migrants arrive on the Isle of Bute on December 4, 2015 – Getty

Some have taken the sudden arrest and draconian threat from the local Police as a sign that the European approach to policing discussion and critique of mass migration of social media may be coming to the UK.

Dutch police have paid numerous visits to people making anti-mass migration comments on social media this January, telling one man: “You tweet a lot. We have orders to ask you to watch your tone. Your tweets may seem seditious.”

In December last year, it was reported that Facebook, Twitter and Google had teamed up with German law enforcement to delete “hate speech” within 24 hours, in what was seen as being a last-ditch effort to silence public dissent about the million plus uncontrolled arrivals.

In Denmark too, police have adopted a harsh stance. A veteran politician was arrested and handed a steep fine earlier this month for tweeting about the European migrant crisis and Muslim anti-Semitism.