A Bulgarian man who lives close to the Turkish border has been hailed a “superhero” by national media after he started using his spare time to patrol the border on his quad-bike (ATV), looking for illegal migrants.

Dinko Valev came across his new hobby while riding ATVs with friends in the backwoods beyond his home – just miles from the Turkish border. When he was jumped by a man claiming to be a Syrian migrant screaming “Allah” and who tried to steal his ATV to make good his escape, Mr. Valev took the man and others prisoner.

He is now calling for other Bulgarian civilians to join him in establishing unofficial “voluntary border squads” to support over-stretched police, and has even suggested the government start paying bounties for every illegal captured, to encourage others to get involved.

Speaking to Bulgarian television station BTV after his latest haul, taking his migrant head-count to 25 illegals, Mr. Valev explained that even as the interview was ongoing they and the camera crew were probably being watched by illegals in the woods. Describing the first time he caught an illegal on his ATV back in August, he said:

“Suddenly a man jumped out of the bushes in front of me. I did not know he was a migrant at first, so I stopped and got off the ATV to see what was going on.

“He rushed me trying to take me down, probably to steal the ATV. I punched him a couple of times and he went down, I kicked him 3 times for good measure and he started yelling “Allah-mallah”. He was wearing torn shoes, jacket, jeans and a rucksack.” 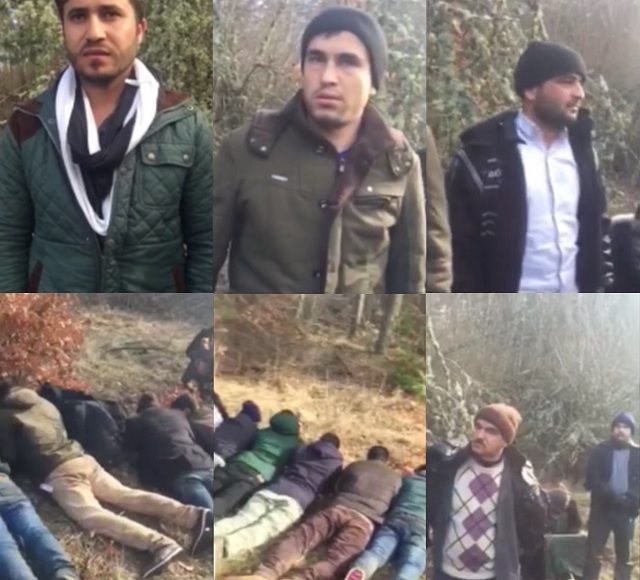 Dinko Valev has taken pictures of the men he captured / Facebook

After Mr. Valev had beaten the man into submission, the other members of the illegal’s party also emerged from the woods. Another seven men approached, with three women and a child in tow. The men immediately rushed Mr. Valev, one of them attempting to stab him with a screwdriver while screaming “Allah!” he said, such was their desperation to steal his ATV.

But the Bulgarian “superhero” took down three of the men before the others surrendered. One of the migrants — who claimed to the Syrian refugees — spoke English, a common language for Mr. Valev who told them if they laid face-down on the ground and didn’t move, he wouldn’t kill them. There he waited with his prisoners for an hour and a half until police could arrive and perform formal arrests.

Mr. Valev has gone out on his ATV a number of times since. Although he goes out unarmed he explains the men he hopes to catch are dangerous, and if they aren’t stopped the whole of European civilisation is in danger: “One of them I chased for about 2 kilometres. The others surrendered quickly, they were scrawny.

“One fell into a big puddle and almost drowned in it, so I tied him to a tree and called the police. These people are very aggressive and have nothing to lose, they have left behind everything. We are in serious danger of being wiped out if we let them in.

“This is our country. Only jihadists, Syrians and the Taliban are trying to enter. In three sorties since August I’ve captured 25 men. Imagine how many people have passed through there in the rest of the time”.

Explaining that the police stuck to the more “lively” areas like the main A4 autobahn, the direct motorway from Bulgaria to Istanbul, and the big towns, in a separate interview with Bulgaria’s EraTV Mr. Valev explained in his neighbourhood “if we don’t help ourselves, no one else will”.

Mr. Valev is deeply unconvinced that the men he is capturing are what might be called genuine refugees. He remarked: “In France, those that did the attacks, were they fleeing? They destroy, they want to conquer. They try with a screwdriver to stab me, saying “Allah, Allah”. Here at the border, it is hell.

As the police have no resources to patrol the area and the army are unlikely to be deployed, Mr. Valev wants to start a border squad with other volunteers to patrol the area. Thanking God he has his own business and therefore can support himself, he regrets he only has the resources to take another two or three men with him on patrols, and called on the government to release funds to encourage other volunteers.

If the government would pay a bounty of €25 per illegal captured, he said “In half an hour I would fill my place with [volunteers]”. Yet Mr. Valev wouldn’t want to keep the money himself: “I would use it for donations to orphanages, rest homes for the elderly, the churches”.

This Bulgarian “hero” isn’t the only civilian standing-to at his nation’s border to defend it from illegals. Breitbart California reported in 2014 on the Minuteman project, a reformed group of civilians patrolling the Mexican border which was aiming to collect thousands of volunteers. In Europe, the Identitarian movement, labelled “hipster right wingers” has been staging regular protests at the Austrian border, forming a human fence to keep out illegals.