Police in Cologne have released photographs of suspects involved in the New Year’s Eve sex attacks, while a leaked report shows they may have had far more warning than previously reported. 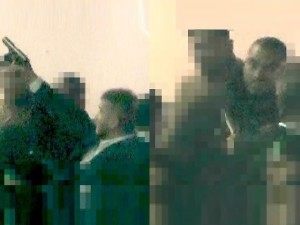 One suspect discharges a handgun during the New Year’s Eve celebrations. He is being sought by police

The photos show five men who Cologne police suspect of either assaulting or harassing women during the spree of crimes that occurred on New Year’s Eve outside of the Cologne train station.

The pictures of all five men strongly suggest they are from North Africa and police are linking the attacks primarily to men of North African origin according to Der Spiegel.

Police believe that the men in the photographs are directly linked to those who surrounded women from all sides, harassed, sexually assaulted, and robbed many of them during the course of the evening.

Now just days after the grainy photos of the suspects were released, two men have been arrested in the city of Hamm, and have been taken to Cologne to have their identities checked.

A police spokesperson said, “Despite the alarming situation, we managed to find more witnesses and victims with photos of the suspects,” other photographs were sourced from CCTV in and around the area of the train station and likely matched up with witness descriptions of the attackers.

Cologne cops have dedicated enormous resources into tracking down suspects involved in the incident. Some 120 police officers are currently on the case which is an almost unprecedented number for the region to be working on a single case.

The Cologne attacks are said to have involved over 1,000 perpetrators, and as Breitbart London has previously reported, police have had a difficult time making arrests in the case. Few thieves and attackers have been detained and even fewer have actually been sentenced for any crimes related to the night.

A leaked internal memo is also shedding light on the performance of Colognes police on the night of the event. Die Welt has reported that police were in fact warned about criminality from North Africans in advance of the New Year’s celebrations.

According to a quote from the chief of the downtown police station in Cologne, police knew there would be a risk from North African migrants.

The quote dated from December 29th reads, “during the celebrations it should be expected that crowded areas in connection with increased alcohol consumption are to be inherently dangerous. In addition to a wide variety of bodily harm there has been an increase in pick pocketing and muggings. This is probably largely due to the offenders being NAFRI who are able to take advantage”.

“NAFRI” is a term for men of North African origin, according to the report.

Officials also emphasised that the holiday security was a “special situation” in light of the terrorist attacks that occurred in Paris only a month before.

The report mentions the method the migrants used to harass and distract victims – shooting fireworks into the crowds – saying, “a massive and often reckless use of pyrotechnics and fireworks (targeted “bombarding” of people, and emergency services) and the resulting dangers (of panic) will require a clearly visible police presence throughout the area.”