An explosion happened in moving traffic in Berlin this morning after an explosive device in a silver Volkswagen car detonated, killing the driver. 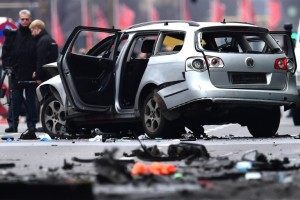 The blast occurred around 0800 local time this morning on Bismarck Straße on the route into central Berlin. Germany’s Die Welt reports eyewitness accounts who said the driver started the car and drove it “a few metres” before it exploded. One said the shockwave from the explosion could be felt half a mile away.

The car then continued moving while burning for another 100 metres before it hit a parked car and came to a stop.

German newspaper Bild now reports the victim was known to police as being involved with drugs and violence, and the killing is being potentially linked to Berlin’s immigrant drug gangs. The car is reportedly registered to a woman with a “Turkish sounding name”.

Breitbart London has reported in the past on the “brutal and ruthless” Arab gangs who fight for control of the Berlin drug trade. The 2015 article reported:

Berlin police estimate of the 30 criminal Muslim family clans in Berlin, each of which has up to 500 members, one tenth of all members are engaged in serious criminal activity at any given time. And they dominate the criminal landscape: a German senate report found that between 2011 and 2014, the majority of all gang crime suspects in the country were of “Arab origin”.

German police say the gangs are hard to crack because the national law enforcement system is not set out to deal with the problem. When individuals are arrests for gang crime their family structures aren’t recorded, so it becomes difficult for officers to build up pictures of who is related to whom, and how gangs operate.

The blast was so severe that the crew of an ambulance who happened to be passing when the bomb went off were unable to save the driver. Police warned locals to keep their distance and to not stand near windows while bomb disposal experts probed the vehicle for a secondary device this morning, but no other threat was found.