As of late I have been repeatedly warned and blocked on Facebook for my reportage about violent and stealthy jihad activity, sharia oppression of women and non-Muslims, and my other activity for human rights.

Whether it is a concerted effort by Muslims and leftists to report me to the shadowy and inaccessible Facebook authorities, or whether Facebook itself has developed code that enables it to search out and destroy points of view that it opposes and hates, it speaks to a deeply troubling development.

Over the past week, my page “Islamic Jew-Hatred: It’s In the Quran” has been taken down from Facebook because it was “hate speech.” Hate speech? Really? The page ran the actual Quranic texts and teachings that called for hatred and incitement of violence against the Jews. So who exactly was responsible for any “hate speech” that may have been present on the page?

When they took down the page, photos of Muslims such as this one were removed. 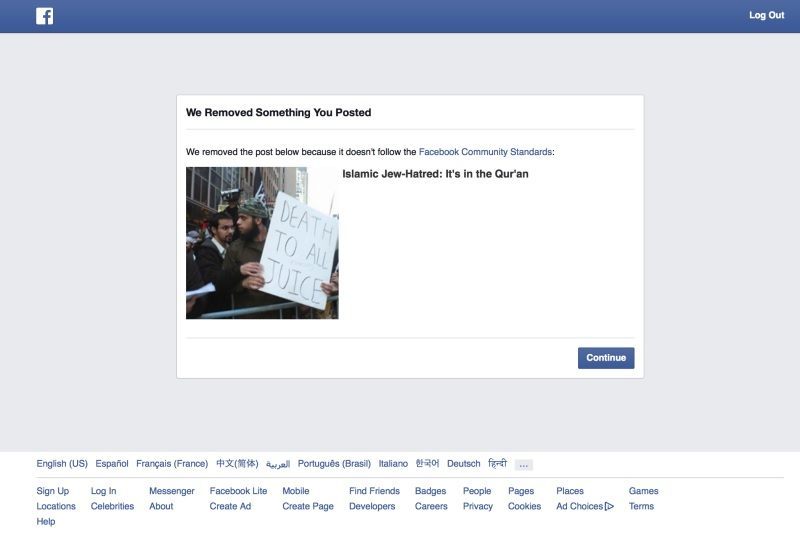 This is an actual photo of a Muslim holding a sign saying “Death to the Juice” at an anti-Israel rally in New York City. The photo was taken my esteemed colleague Pamela Hall. It is news. Facebook policy dictates that truth is hate speech.

Despite its content being simply factual, the page was taken down. Up only two weeks, it had 10,000 followers. Of course, I started a new page, “Islamic Antisemitism: It’s in the Quran” — like it here. But I suspect that this page won’t live long on Facebook, either. Why is Mark Zuckerberg scrubbing evidence of Muslims inciting people to commit acts of hatred and violence? Why do Mark Zuckerberg’s policies allow for vicious posts and pages against Israel to stand, but exposing the truth behind that Islamic hate is prohibited? That’s sharia. 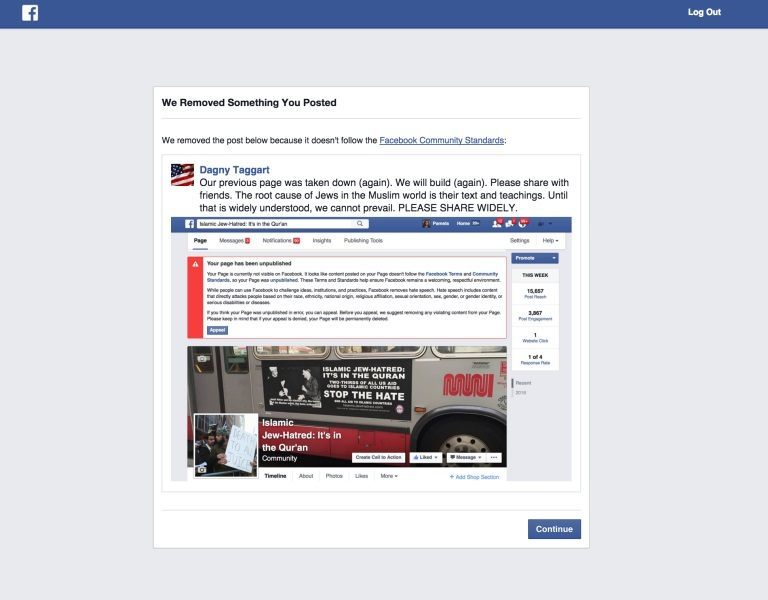 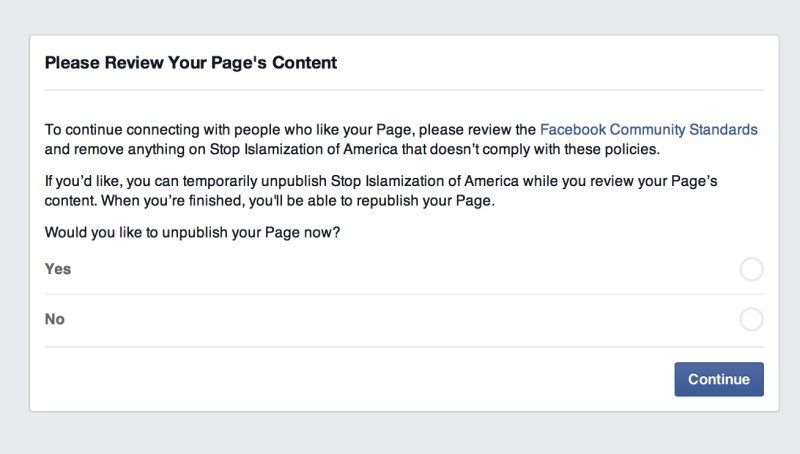 Saturday we received a warning on our Stop Islamization of America pages (join them!) because of this photo, another actual photo of Muslims daubing a building wall with “Kill the Jews” and “Jihad against Israel.” 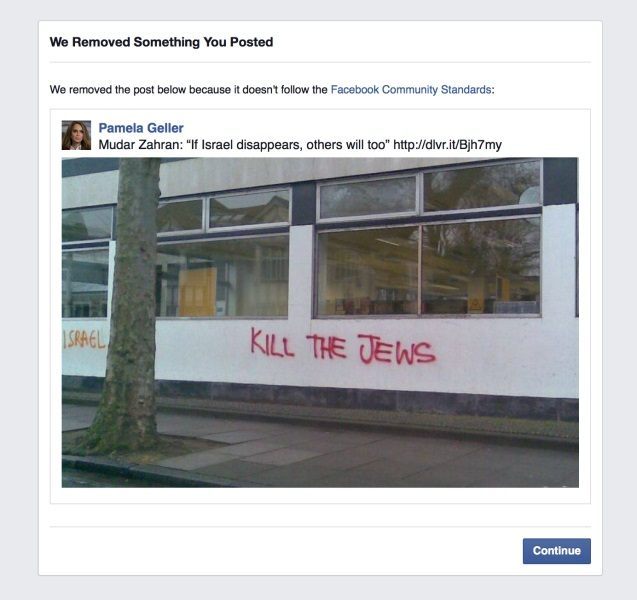 I suspect that those pages are in trouble as well. And to those of you who say, “Forget Facebook, we’ll do without it,” I say no. I am sick and tired of the suppression of our speech. We are unable to engage in the public square. And yes, Facebook is the public square; it’s where we connect. We have to fight for it. Shouting into the wilderness is not freedom of speech. My Facebook page has close to 300,000 followers, and combined with my pages (SIOA, SION, AFDI), the reach is another 100,000. It’s a critical connection.

It’s not just us. Donald Trump had to cancel a rally Friday night because of the hordes of agitators who threatened chaos and violence at the University of Chicago. Of course, I had to laugh when I heard Donald Trump trumpeting free speech and the First Amendment. And I had to chuckle even harder still when media elites blamed him for the riots. Considering the fact that Donald Trump blamed me for the jihad terrorist attack on my free speech event in Garland, Texas, it was unpleasantly satisfying.

Frankly, it’s terrible and getting worse. As Europe burns, Zuckerberg has promised German Chancellor Angela Merkel that he will work with her in censoring posts that are critical of the Muslim invasion of Europe. As it continues to seize power and control, the left is on dangerous ground. We well know the bloody outcome of this trajectory.

Calls to “rape and dice” me appear on Facebook regularly: 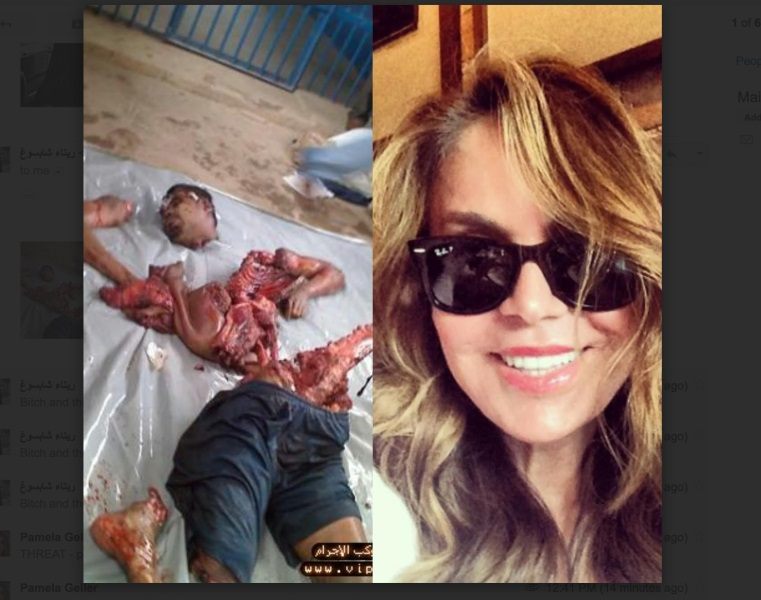 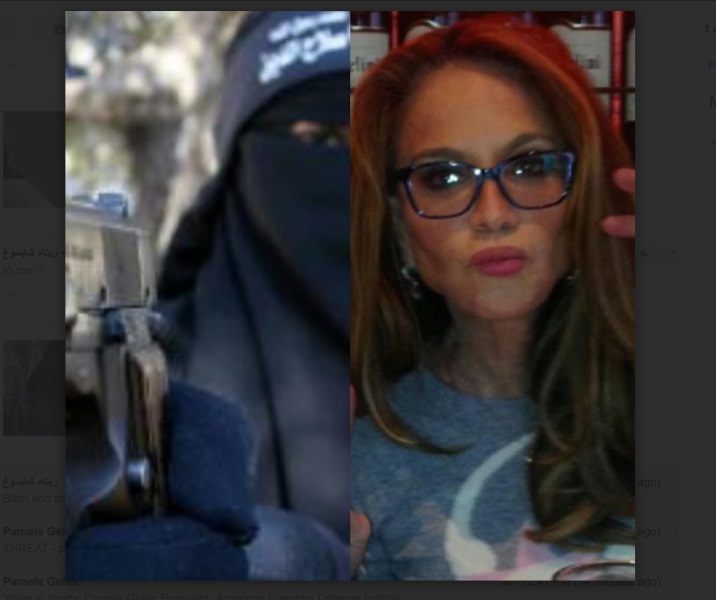 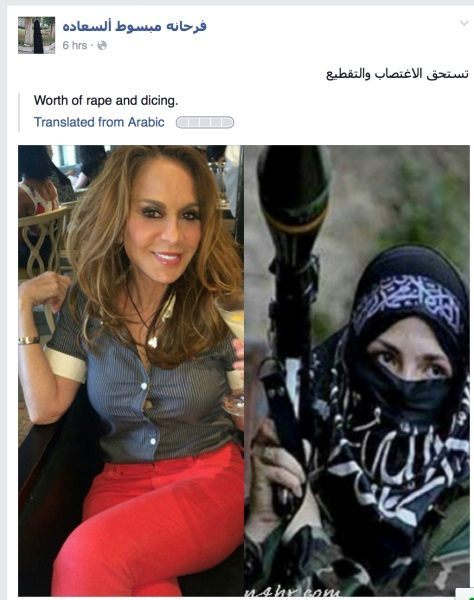 Dexter Van Zile, the Christian Media Analyst for the Committee for Accuracy in Middle East Reporting (CAMERA) writes: “Recently, my correspondents have alerted me to another page on Facebook. The end of the URL includes the phrase ‘The Truth About Jews” and the page itself promotes Blood Libels against the Jewish people.

It’s titled ‘Jewish ritual murder.’ The page has all the stuff you’d expect on an anti-Semitic Facebook page. It has 248 ‘Likes’ and includes anti-Jewish libels from all over the world. The page includes a disclaimer that is simply bizarre: ‘Comments that are offensive, obscene, vulgar, irrelevant to this page or classified as spam will be removed.’ The entire page is offensive and obscene. And the page, which has been in existence since March 2012, is an exercise in vulgar anti-Semitism.

“Yes, people have complained about the page. And yes, Facebook has responded with messages indicating that the page does not violate the company’s community standards.
Will the page eventually be removed? Probably. But why doesn’t Facebook delete this stuff when first apprised of its presence on their website?”

There is so much: 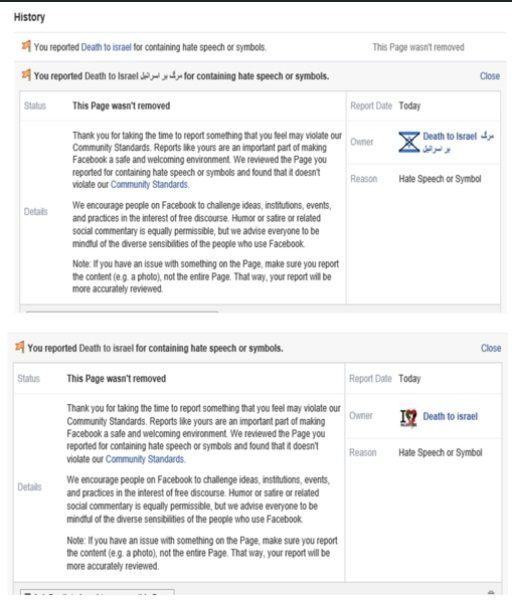 The Blaze recently reported that “a legal group accused Facebook of favoring anti-Semites over Jews following an experiment it conducted. It created two Facebook groups with nearly identical content, but with the words ‘Jews/Israelis’ and ‘Arabs/Palestinians’ swapped.”

Then they reported both groups to Facebook. The pro-Israel group was taken down. The pro-Palestinian group wasn’t. 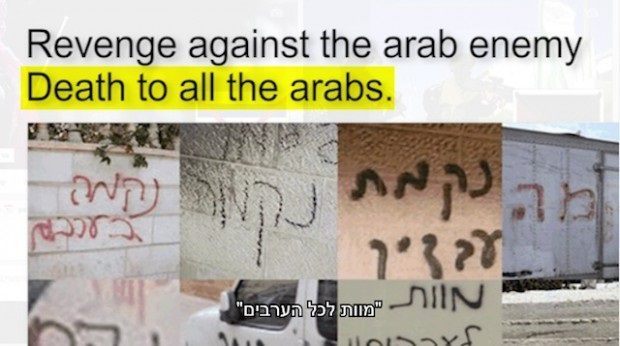 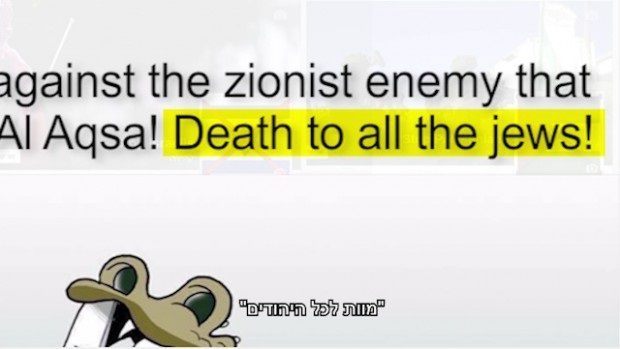 Nitsana Darshan-Leitner of Shurat Hadin commented: “Facebook’s management is required to act immediately against the blatant incitement being waged for years against Jews and Israelis in the social network it owns and manages. The in-depth investigation we conducted proves beyond any shadow of a doubt that [Facebook’s] claims of equality in the face of its conduct against any individual or group of people are at best erroneous and false in the worst case.”

Darshan-Leitner concluded: “It cannot be that in 2015 a publicly traded commercial company will carry out a racist policy which so blatantly discriminates in favor of any party. The investigation we conducted proves that indeed there is bias in favor of one political party and against Israelis and Jews in particular. Jews and Israelis around the world should be very concerned over the results of the investigation and understand that the most famous social network in the world is working actively in favor of the Palestinians.”

Increasingly, we are unable to engage in the war of ideas. We are blacklisted on college campuses while racists and terrorist sympathizers are welcomed and paid handsomely. The enemedia won’t have the most effective voices against jihad and sharia on the air; instead, they’ll host a trimmer (one who trims the truth), or media talking heads themselves become instant experts and get the facts absolutely wrong.

We need a presidential candidate who will stand strongly for the freedom of speech. Our most basic Constitutional freedom is at stake.