Nationalistic organisations have been banned from holding a demonstration in the Muslim enclave of Molenbeek, Brussels – an area which has become know as the ‘European capital of Jihad’.

Molenbeek mayor Françoise Schepmans personally blocked the demonstration, which was planned for 3pm this Saturday in the public square of Molenbeek-Saint-Jean, RTBF reports.

She said she would not let the group “express themselves” because they were “extremists” akin to the Islamist terrorists hailing from district, who were behind both the Paris and Brussels attacks.

The “hipster right-wing” Génération Identitaire group had planned the event – a notably young movement, including many students who are opposed to mass-immigration the islamisation of Europe.

The ‘Casuals United Belgium’ group of football hooligans had announced on Facebook that would also be in attendance, declaring: “This is the perfect opportunity to express our dissatisfaction in the heart of the lion’s den”.

The group was part of the ‘Casuals Against Terrorism‘ demonstration on Sunday, which police hit with water cannon and pepper spray.

“We have no knowledge of any demonstration request from this movement. But in any case, this demonstration will not be authorised”, said Mayor Schepmans, explaining that:

“When we fight extremism, it is against all extremisms. It is therefore out of the question to allow furious madmen [fous furieux] to express themselves.”

And if people defy the ban, “the police will be present to dissolve the gathering on the spot”, she promised. 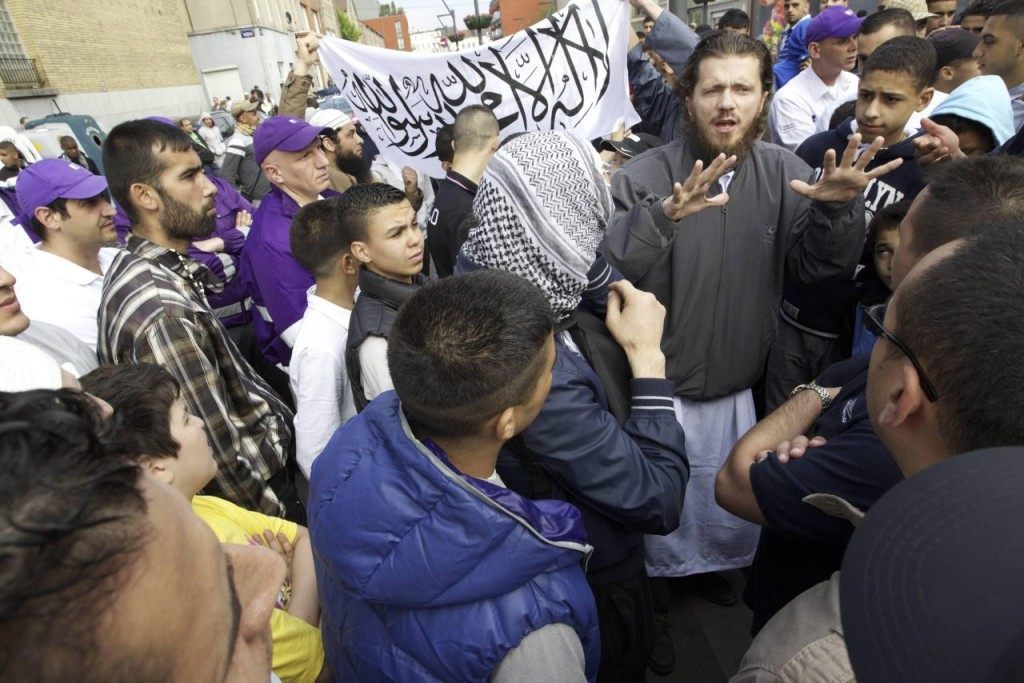 A ‘Sharia4Belgium’ radical Islamist group member speaks to the crowd during a protest by Muslim men and women in Sint-Jans-Molenbeek (Molenbeek-Saint-Jean), in Brussels, on June 1, 2012. (Getty)

“In Molenbeek as elsewhere, Islamists out of Europe” was the heading of the event as advertised by Génération Identitaire.

Almost 500 Belgians have joint Islamic State (IS), more per capita than from any other European nation. Molenbeek, in the capital city of the European Union, is home to just 90,000 habitants but has supplied many of the terrorist who attacked Paris and Brussels.

The Belgian authorities have been accused of turning a blind eye to Islamic extremism in the district.

Ten years ago, Muslim journalist Hind Fraihi posed as a sociology graduate student to investigate. She wrote a book warning that Islamist hate was being preached openly, and many youngsters recruited into Jihad. She was largely ignored and dismissed as “exaggerating” by the government.

Just this weekend, young men in the Molenbeek were sent messages calling on them to “make the right choice” and “fight the westerners”, thought to be sent by IS operatives.