“Is Islam compatible with Europe?”

This was PEGIDA founder Lutz Bachmann’s succinct answer, as he reclined back into the booth in a darkened corner of the Standard Bearer pub in Coventry. I could have thought of no better named boozer in which to sit down with a man like Bachmann, who has himself become the standard bearer for the anti mass migration, anti-Islamisation PEGIDA movement across Europe.

He is a big chap – standing at over 6ft 2inches tall, with the weight of a man who may have enjoyed a few pints, as well as a fair few workouts in his day.

But his imposing stature is undercut by his affability. Far from the “far right” thug that Mr. Bachmann is often portrayed as, the man exudes the charisma of a confident young man, almost as if he were just beginning his career. Remarkable for a man of 43.

Mr. Bachmann has a chequered history. He has criminal record for 16 burglaries, assaults, drug dealing, and drunk driving. He reportedly fled Germany in 1998, setting up a business in South Africa in what I can only imagine were scenes reminiscent of the Netflix series Lilyhammer.

“But that was over 20 years ago,” said Mr. Bachmann, admitting that he had “made some mistakes, learned a lot, and learned about people”.

He says that people from his past who had previously abandoned him are now “climbing in my ass”, apologising to him, and trying to come back into his life. Drawn once again into the orbit of a man who no one imagined could coalesce an anti-Islamisation movement which has drawn over 20,000 onto the streets of Germany: Patriotic Europeans Against the Islamisation of the West (PEGIDA).

“Nobody thought a guy like me was able to build a people’s movement,” he says humbly – almost unconvinced that he has done it, but citing “talking the same language as the normal worker, the mid range” as the key component behind his success. That, along with having the “balls, the nuts to do it”. 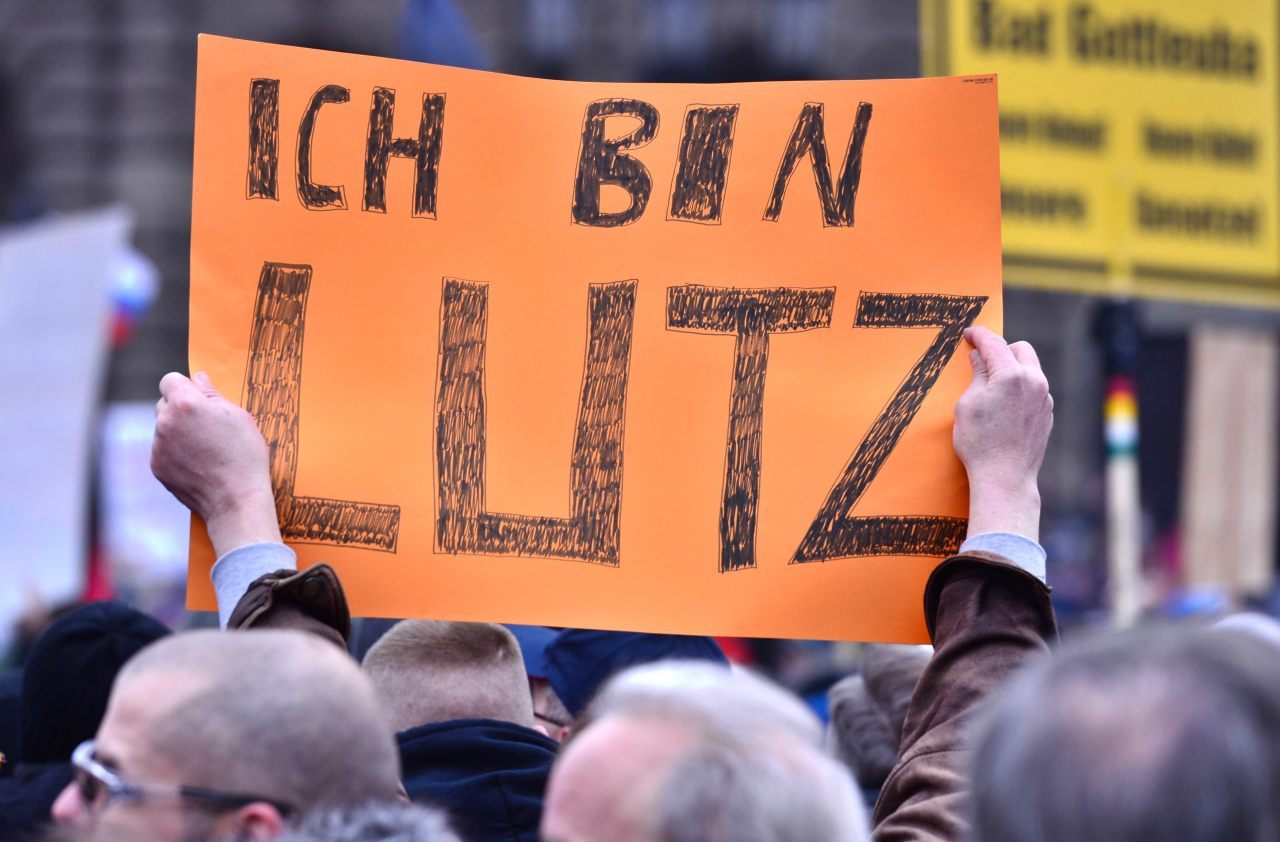 A sympathizer of Germany’s PEGIDA holds a poster reading ‘I am Lutz’ during a march in Dresden, eastern Germany on January 25, 2015. AFP PHOTO / JOHN MACDOUGALL

He’s the son of a two German teachers, and repeatedly stresses that he’s not “left, not right” on the political spectrum. He takes flak from both sides, he says: “As long as left and right hate me I am on the right path”.

PEGIDA now has movements in 27 different countries, but Bachmann doesn’t manage them all. It’s almost a franchise now, and he freely admits that he doesn’t know, and certainly doesn’t seem sure of all the people leading the different groups around the world.

But one person he does speak very highly of is Tommy Robinson (Stephen Lennon) – the former English Defence League (EDL) leader who is now running Britain’s PEGIDA branch.

Bachmann doesn’t really give interviews, either. PEGIDA frequently talks about the “Lugenpresse” (liar press) which fails to report accurately on PEGIDA, Islam, and immigration across Europe and the United States. Last year, as PEGIDA was marching over 20,000 people in Dresden, The Atlantic called Lugenpresse the “worst German word of the year”. It will come as no surprise to many that the mainstream media would lash out against a word that highlights their own, intentional failings. But Bachmann’s PEGIDA has popularised the term to the point where it has become a pillar – even a rallying cry – for the nationalist, populist movements across the continent.

He’s frustrated that no one seems to report on what PEGIDA actually stands for, or wants, though a few outlets – the BBC and the International Business Times – have made reference to the group’s 19-point manifesto.

“All I want from the press is to be objective,” he says, “just put once what PEGIDA stands for”.

The first point of the group’s manifesto may even surprise some people: “PEGIDA is for the admission of war refugees and [people who are] politically or religiously persecuted”.

You wouldn’t think it to read about them in the so-called “Lugenpresse” – but the manifesto is entirely reasonable. In the United States, it may even be called “centre-right”. But Germany has a precarious history with people who are outspoken about the preservation of German culture and the defence of the native people. As such, the political and media establishment are quick to dismiss Mr. Bachmann and his portly, upbeat political partner ‘Siggy’ (Siegfried Daebritz) – who both seem to be enjoying themselves in the pub after PEGIDA UK’s second peaceful walk in Birmingham this past weekend. 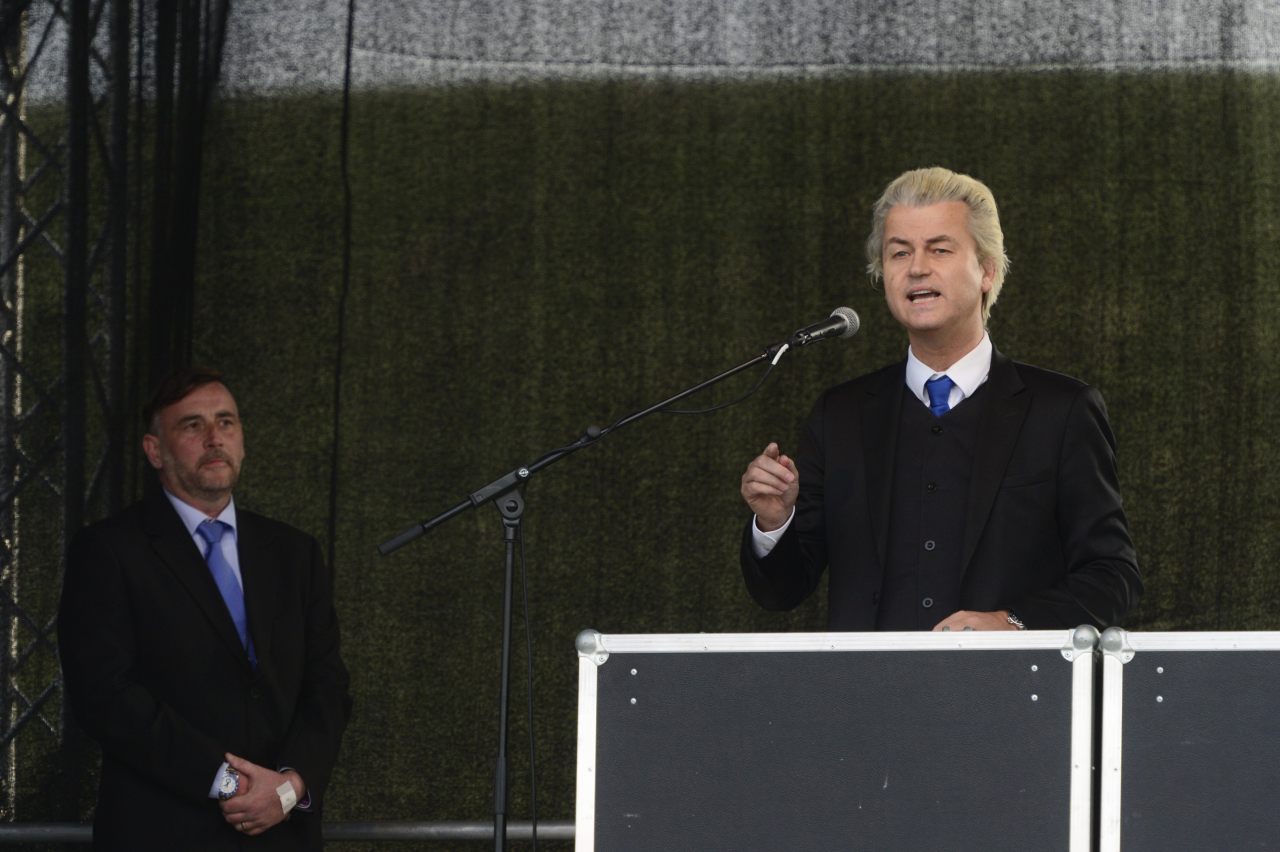 Dutch right-wing Party for Freedom (PVV) leader Geert Wilders (R) addresses a rally with Lutz Bachmann (L) leader of German right-wing movement PEGIDA (Patriotic Europeans Against the Islamisation of the Occident) on April 13, 2015 in Dresden, south-eastern Germany. The PEGIDA marches — which have voiced anger against Islam and “criminal asylum seekers” and vented a host of other grievances — began in Dresden in October 2014 with several hundred supporters and have since steadily grown. (ROBERT MICHAEL/AFP/Getty Images)

PEGIDA’s manifesto also calls for more funding for the German immigration ministry (BAMF) as well as the successful integration of Muslims already in Germany. The manifesto is clear – there should not be a special treatment, or the bending of German law, for migrants. They want a “zero tolerance policy towards delinquent asylum seekers and migrants” and like Britain’s UK Independence Party (UKIP) call for an Australian-style, points-based immigration system.

But UKIP, like other Eurosceptic political parties across Europe, are also PEGIDA-sceptics. The party in Britain removed one of its London election candidates – Anne Marie Waters – for leading Britain’s PEGIDA movement alongside Tommy Robinson. Ms. Waters took it in her stride, refusing to kick up a fuss about the issue. She understands the political realities which are prevalent in PEGIDA’s relationship with the Alternative fur Deutschland (AfD) party in Germany too.

There had been reports of PEGIDA speaking with AfD officials – a party which recently increased their share of the vote substantially in German regional elections – but Mr. Bachmann doesn’t speak with much confidence about the relationship between his organisation and the political party.

“The next day, after the elections, she said that freedom of religion, in the constitution, is bigger than the law to stop kids getting hurt – the right to be unharmed”.

His comments are a nod toward the issue of circumcision, which he believes is unjust towards kids. “Circumcision should be your own choice,” he said… “At your 18th birthday, fine”. And he says that Ms. Petry is afraid to address this issue because “she’s scared of Germany’s past with Jewish people”.

There are however, he says, some chances of certain AfD members working closely with PEGIDA, also claiming that “it looks like a big part of AfD is reconsidering Petry [as its leader]”.

“If she goes, there could be a way to work together”.

His criticisms of AfD is that they “take the fruits away from PEGIDA” in terms of fundraising and election victories. But he’s not clear if he wants to make PEGIDA a political party in its own right, though he dismisses the idea of “splitting” the movement’s vote as a result.

“PEGIDA and AfD could come together [as political parties]” he says, before clearly filing the issue in his mind for more careful, later consideration. 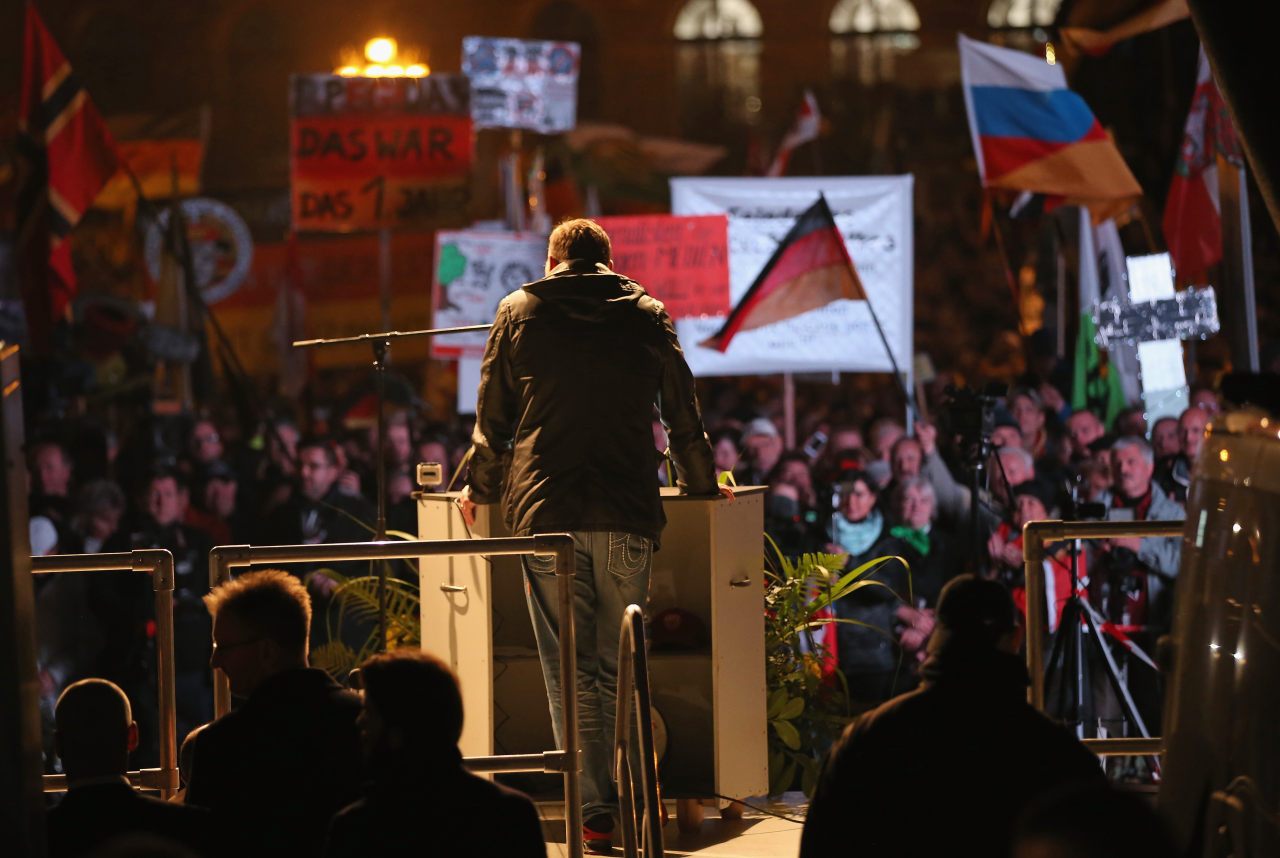 DRESDEN, GERMANY – OCTOBER 19: Lutz Bachmann, co-founder of the Pegida movement, speaks to supporters gathered at Theaterplatz square on the first anniversary since the first Pegida march on October 19, 2015 in Dresden, Germany. (Photo by Sean Gallup/Getty Images)

And then we came to Brexit – something I heard him boyishly, excitedly, talking about during the speeches in Birmingham earlier in the day.

“I hope so much for Brexit,” he said.

“The European Union is a bunch of alcoholics in Brussels who rule with no knowledge of the ideology of each country. A Europe of strong nation states.”

He makes the analogy of a stew – an almost predictably traditional German parallel.

“We are all ingredients [in the EU stew]” he says, in a somewhat strained analogy that probably loses more in translation than anything else. He says “you get bored of the same stew” after a while. Better, in his opinion, to be able to fluidly combine the different ingredients for different occasions, rather than having them all in the same pot, permanently.

“Keep national identities,” he adds. “Every nation is proud of its values. You can’t put all things in [together]”.

And speaking of putting all things into Europe – I asked him how many migrants he thought would come, in total, this coming year. He ran the numbers in his head, calculating the cost of the recent Turkey-EU deal.

“If the deal works, eight million,” he replied. 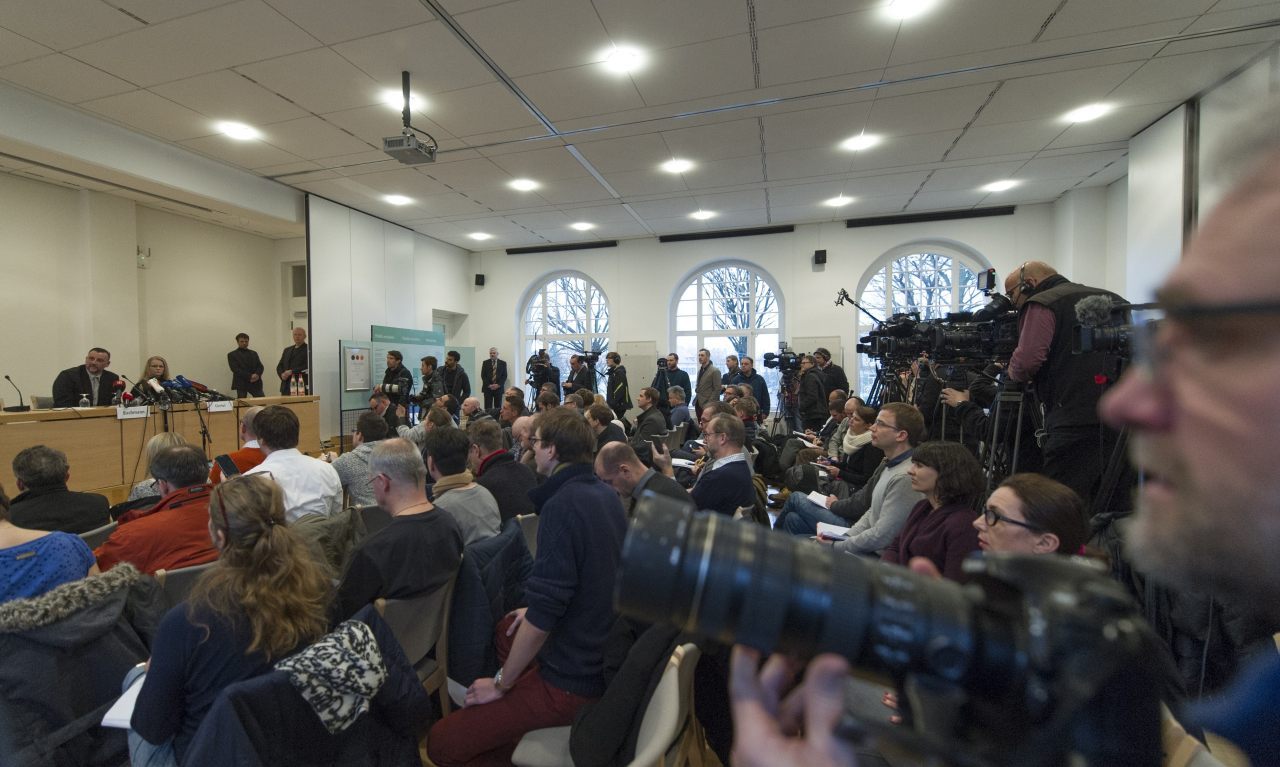 Lutz Bachmann (L), leader of the anti-Islamic Pegida (Patriotic Europeans Against the Islamisation of the Occident) movement and Pegida spokeswoman Kathrin Oertel give a press conference on January 19, 2015 in Dresden, easatern Germany. German police banned a planned rally by the movement and other public open-air gatherings in the eastern city of Dresden on January 19, 2015, citing a terrorist threat. (ROBERT MICHAEL/AFP/Getty Images)

That is one of the highest estimates I’ve heard so far, but includes legal and illegal migration to Europe. Considering the 3.4 million people that entered the EU in 2013, this is a stark prediction. But it’s not that far off what a German think tank recently predicted when it said that 6.4 million migrants could enter Germany alone this year under a “worst case scenario”.

Bachmann thinks Germany will take at least 6 million this year.

And he describes that deal with Turkey as “stupid”, particularly because Turkey’s leader Recep Erdogan has already asked for another €6bn to help implement a basic level of border control.

“Benghazi”, he shoots back, referring to the 2012 attack on the U.S. embassy in Libya during Mrs. Clinton’s stint as Secretary of State.

Mrs. Clinton went on to take responsibility for the security issues which led to the death of four Americans including an Ambassador – Christopher Stevens. She initially blamed the attack on an anti-Islam film – the Innocence of Muslims – though it was subsequently discovered that the attack was a premeditated terrorist atrocity, and had nothing to do with any “protests” against said film.

He doesn’t have much to say about Donald Trump – just that he’s “more good [than bad] because he hates [Angela] Merkel”.