The Electoral Commission has announced that the establishment Vote Leave campaign has been handed the designation to fight the official ‘leave’ campaign for Britain’s European Union (EU) referendum on June 23rd. The group has previously been slammed for advocating for a “double referendum” strategy – and for its leading spokesman not truly wanting Britain to leave the EU.

Supporters of the ‘Vote Leave’ establishment campaign to lead Britain out of the European Union (EU) caused outrage last night after claiming that the Electoral Commission had already made a decision, and that the group would be getting the official referendum designation ahead of the Grassroots Movement (GO).

Andy Wigmore from the Leave.EU group has told Breitbart London exclusively that they will be calling for a judicial review into the designation process.

The Electoral Commission has released the point-scoring process to explain their decision, implying less “overall support from campaigners” even though GO had huge rallies, whereas Vote Leave had none.

They also docked points from GO for “evidence of future engagement with other campaigners” even though GO appealed for a merger with Vote Leave five times, which Vote Leave rejected every time.

They lost two further points for “evidence relevant to means of future engagement” even though the GO Movement has a much larger social media following for Brexit than Vote Leave – and for the organisation’s “structural capability to represent other campaigners” – again undermined by the fact that Vote Leave has refused to work with GO on a number of occasions. 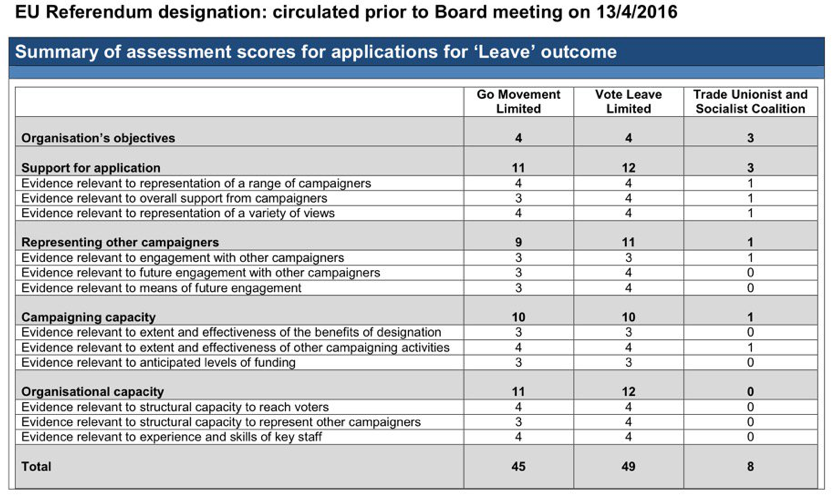 The Vote Leave campaign has been through a series of embarrassing incidents, including the botched launch of their website, the resignation of various supporters including businessman Charlie Mullins and Labour MP Kate Hoey – and indeed the demotion of their own two leaders Matthew Elliott and Dominic Cummings.

UK Independence Party (UKIP) leader Nigel Farage has previously written for Breitbart London on how the ‘Notting Hill types’ campaign would avoid the immigration issue, which even Lynton Crosby, who masterminded the Tory election victory last year, said was the number one issue at this referendum.

Vote Leave have also been caught setting up “front groups” in order to fool the Electoral Commission into thinking it had broader support.