The European Union (EU) has appointed a man tasked with imposing ‘European values’ on the entire globe, and solving time-old divisions over culture, and religious conflict.

EU Commission President Jean-Claude Juncker named the new ‘Special Envoy for the promotion of freedom of religion or belief outside the EU’ at the Vatican on Friday.

Mr. Ján Figeľ served as the European Commissioner for Education, Training, Culture and Youth before becoming the First Deputy-Prime Minister of the Slovak Republic in 2010.

Speaking at the Vatican on the occasion of the award of the Charlemagne Prize for European integration to Pope Francis, President Juncker seemed optimistic about the new grandiose initiative and monumental task before Mr. Figel:

“Freedom of religion or belief is a fundamental right which is part of the foundation of the European Union. The persistent persecution of religious and ethnic minorities makes protecting and promoting this freedom inside and outside the EU all the more essential”, he said. 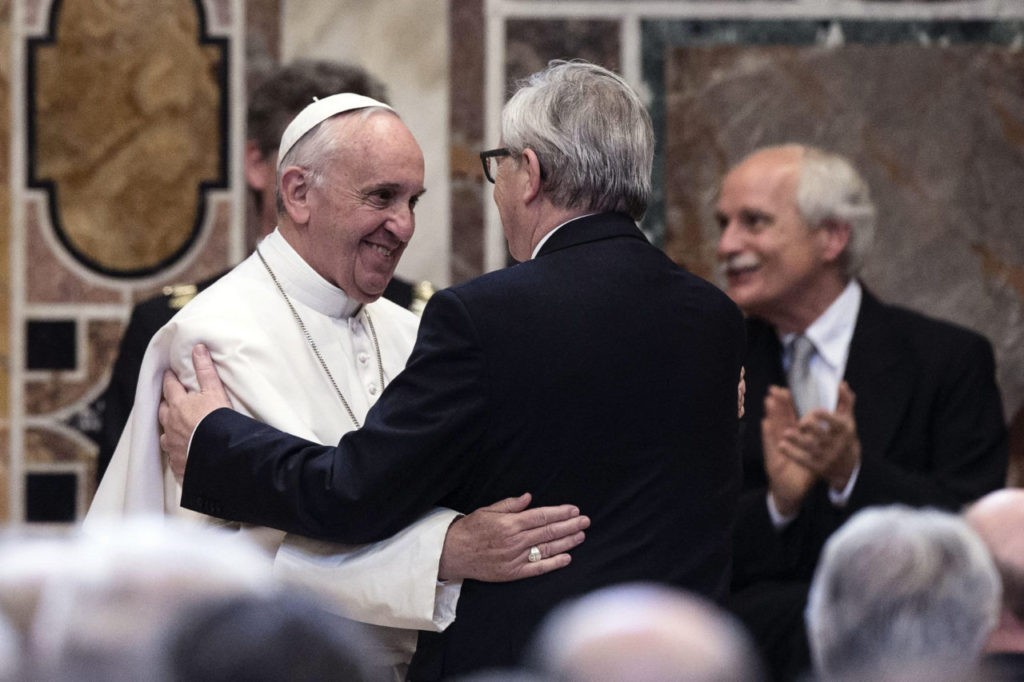 Pope Francis is congratulated by European Commission President Jean-Claude Juncker after receiving the European Union’s Charlemagne Prize for his contribution to European unification, on May 6, 2016, at the Vatican (ANGELO CARCONI/AFP/Getty)

Adding: “I trust that Ján Figeľ, our Special Envoy, will help us in this endeavour, sharpening our focus and ensuring that this important issue gets the attention it deserves”.

The initiative for a new special envoy was called for in a European Parliament resolution on the 4th February this year.

The resolution referred to, “the situation in Iraq and Syria, and the IS offensive, including the persecution of minorities”, and the, “kidnapping and mistreatment of women”, as well as, “the persecution of Christians around the world, in relation to the killing of students in Kenya by terror group Al-Shabaab”.

According to a statement from the Commission, the EU’s unelected executive branch, as part or Mr Figeľs “mission” he will, “present a report in the context of the on-going dialogue between the Commission and churches and religious associations or communities, which is led by First Vice-President Frans Timmermans.”