A massive, migrant crime wave is surging across Germany according to figures buried in a new report released by the country’s Interior Ministry. The data reveals that without migrants considered, crime rates in Germany would have remained roughly static since 2014. But, in fact, the country recorded an extra 402,741 crimes committed by migrants.

While much of this criminality concerned illegal border crossings, German authorities instead talked up a “record surge” in crimes by “right wing radicals”.

Foreign nationals are thought to account for around 11 or 12 per cent of the total population of Germany, but were over-represented in every area of crime.

Illegal immigrants and asylum seekers account for around 2.5 per cent of Germany’s population, but were also massively overrepresented.

In all of these cases as well as those indicated in the chart below, non-Germans and illegal migrants outstripped their proportions of crime to their representation in German society.

They accounted for 40.2 per cent of burglaries, 43.5 per cent of shoplifting, and a whopping 75.7 of pick pocketing or purse snatching.

In the chart below, non-Germans are in light red while asylum seekers and illegal migrants are in deep red. 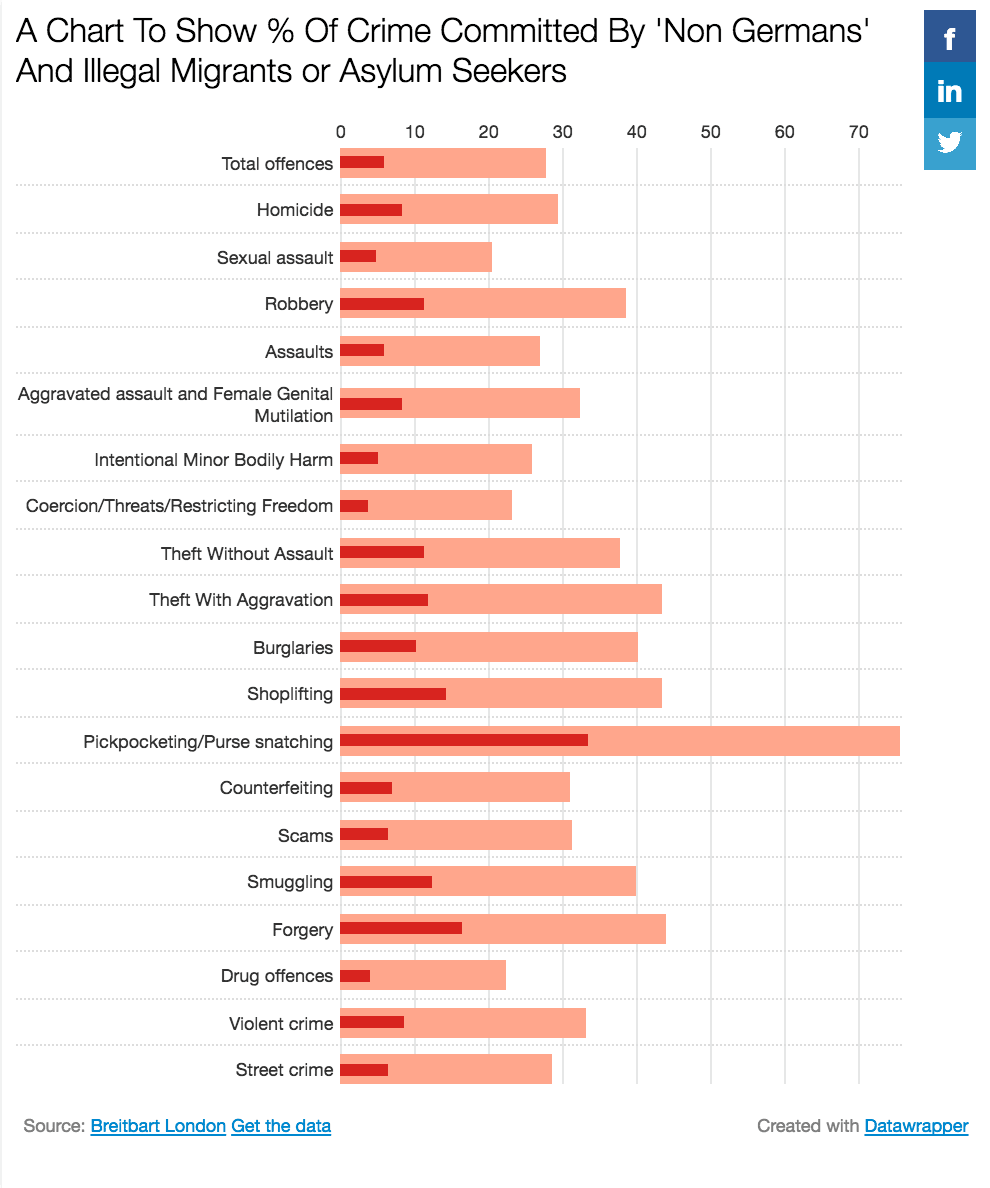 Thefts were most committed by Albanians, with 6,689 offences and Algerians coming close with 5,611. Algerians almost tie with Serbians when it comes to fraud. Balkan nationals were accountable for 2,834 cases, barely above North Africans’ 2,774.

Even when border control breaches are exempted from the data, the situation is still stark. Male crime is stagnant amongst Germans, but when migrants are added, male crime goes up 12 per cent, with female crime rising just 6 per cent. This reflects the fact that most migrants into Europe in 2015 were young men.

Crime rates amongst “non-Germans” outside the residence act are up 13 per cent, whereas crimes committed by Germans are down 5 per cent.

And the report shows that offences against the Residence Act, the Asylum Procedures Act, and the Freedom of Movement Act are up by 157.5 per cent, with shopliftings up by 7.1 per cent, pickpocketing up by 7.0 per cent, burglary up by 9.9 per cent, and drug offences up by 2.1 per cent.

Presenting the report to journalists however, Mr. de Maiziere insisted in focusing on “politically-motivated crimes by the far-right” which he said had risen 35 percent in 2015 to nearly 23,000.

“The sharp increase in politically motivated crime points to a dangerous development in society,” de Maiziere told reporters at a news conference. “We are witnessing a growing and increasingly pronounced readiness to use violence, both by right- and left-wing extremists.”

But while attacks on refugee centre rose to 1,031 compared to 199 in the prior year, most of the offences committed appear to be what could be called “thought crime”, or what police describe as “evidence that they aimed to eliminate certain constitutional principles”.

Of real incidents, 1,031 were attacks on asylum centres, but just 177 of these were thought to be “violent”, with most of the rest believed to be “propaganda” offences or vandalism.

Nonetheless, the reporting from Western news agencies has focused on a “right wing” wave of violence.

But today’s statistics reveal that as a percentage of the population, non-Germans and illegal immigrants account for a massively disproportionate amount of crime in Germany.