Mr. Khan, who was elected after roundly beating the eurosceptic Conservative Party candidate Zac Goldsmith, appeared at a rally of hand-picked ‘Remain’ campaign supporters at Roehampton University with the Prime Minister. 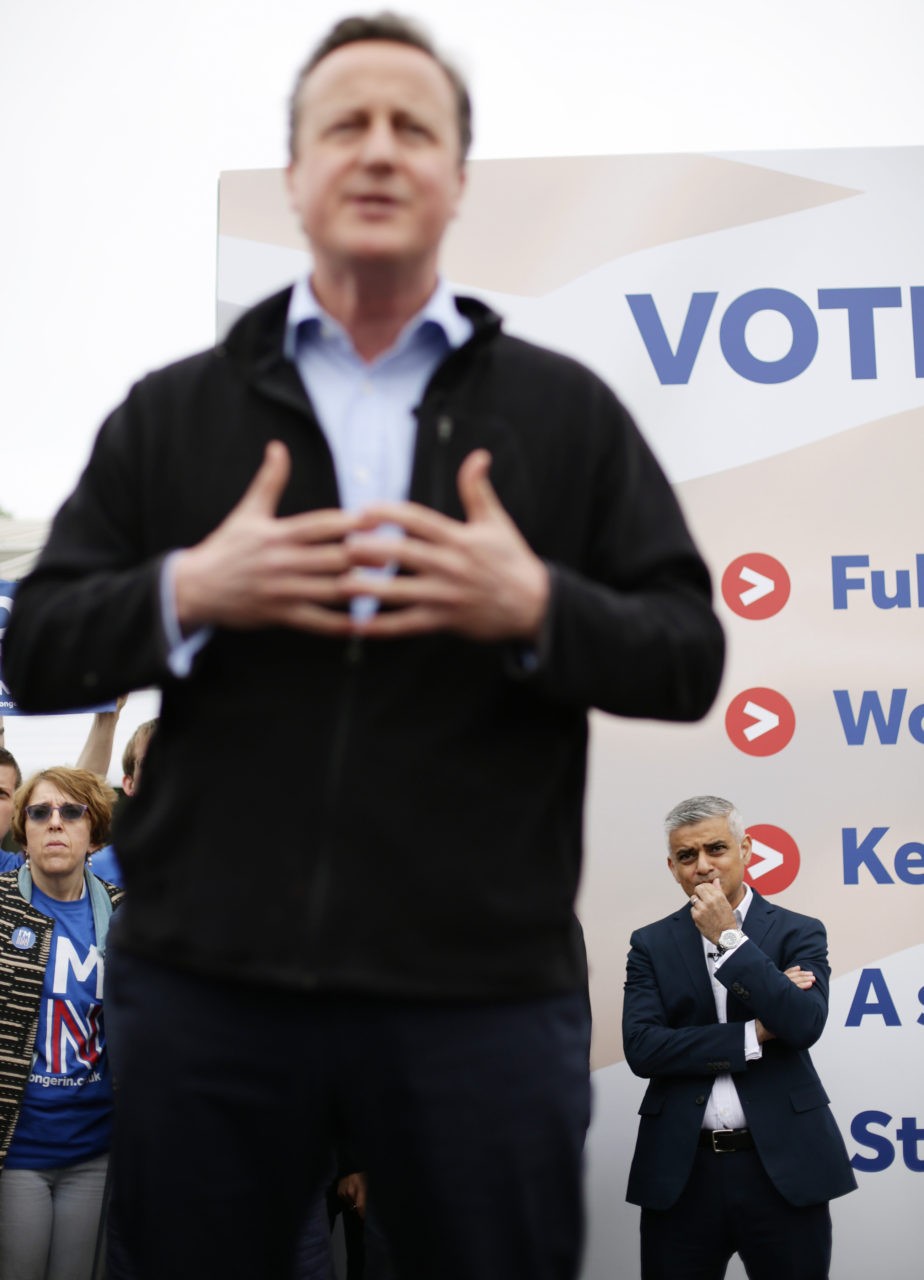 LONDON, UNITED KINGDOM – MAY 30: Prime Minister David Cameron (foreground) makes a joint appearance with Mayor of London Sadiq Khan as they launch the Britain Stronger in Europe guarantee card at Roehampton University on May 20, 2016 in London, United Kingdom. The “guarantee card” lists five pledges should Britain remain in the EU, including the protection of workers’ rights, full access to the single market and stability for Britain. U.K voters go to the polls on June 23 to vote in a referendum on the continued membership of the UK in the European Union. (Photo by Yui Mok – WPA Pool/Getty Images)

But critics have pointed out how Mr. Cameron recently linked Khan to extremists as the Conservative Party campaign for mayor drew attention to Mr. Khan’s previous clients including Nation of Islam leader Louis Farrakhan, Guantanamo Bay detainees, and even 9/11 convicted terrorist Zaccharias Moussawi.

Speaking in the House of Commons at the end of April, Mr. Cameron specifically sought to make political capital from Mr. Khan having shared a platform with a Muslim activist in the United Kingdom by the name of Sulaiman Ghani.

Mr. Ghani – who has been outspoken in his support for convicted terrorists, as well as having links to Islamist group Hizb ut-Tahrir – was dragged into the London Mayoral campaign debate because Mr. Khan had shared platforms and campaigned with him a number of times.

“Sulaiman Ghani – the honourable member for Tooting has appeared on a platform with him 9 times. This man supports IS,” said Mr. Cameron.

“I think they are shouting down this point because they don’t want to hear the truth.

“Anyone can make a mistake about who they appear on a platform with.

But now, less than six weeks since making the comments calling Mr. Khan’s judgement into question, the PM was declaring him a “proud Muslim” and campaigning with him for pro-EU votes in London.

Speaking at Roehampton University, Mr. Cameron commented that Mr. Khan is “someone who is a proud Muslim, a proud Brit and a proud Londoner”. He said that if Mr. Khan “can become mayor of the greatest city on Earth. That says something about our country”.

And Mr. Cameron also seems to apologise for the fact that his late father was successful.

“Let me first of all congratulate Sadiq on his victory. He talked about his father. He’s the son of a bus driver. I’m the son of a stockbroker, which is not quite so romantic.”

The event also saw the launch of a “pledge card” outlining how Britain’s relationship would look, according to Khan and Cameron, in the event that Britain chooses to stay in the European Union.

They claimed to protect: full access to the EU’s single market; workers’ rights; the European arrest warrant; a special status for the UK in Europe; and economic stability.

But critics pointed to the fact that the single market is declining, workers’ rights have been enshrined in UK law before the signing of the Lisbon treaty, the European Arrest Warrant has been used to keep Brits abroad in prison without trial, and that Britain’s “special status” in the EU has led to the country losing every single vote they went against the EU on in the past 14 years.

Recently it was also revealed that the economic growth of EU member states is higher than just one continent in the world: Antartica.