UKIP leader Nigel Farage has given his final set piece speech of the European Union (EU) referendum campaign, a fight which he characterised as “the people versus the establishment”.

Speaking at the Emmanuel Centre in central London Mr. Farage opened by saying “with some degree of pride” that without UKIP the referendum “would never, ever have happened” adding that “it is, in many ways, our referendum.”

“I’ve even heard people talking about ‘Independence Day’, and the banner, the banner that we’ve been standing on now for a very long time — ‘Believe in Britain’ — appears now to have gained widespread use.” 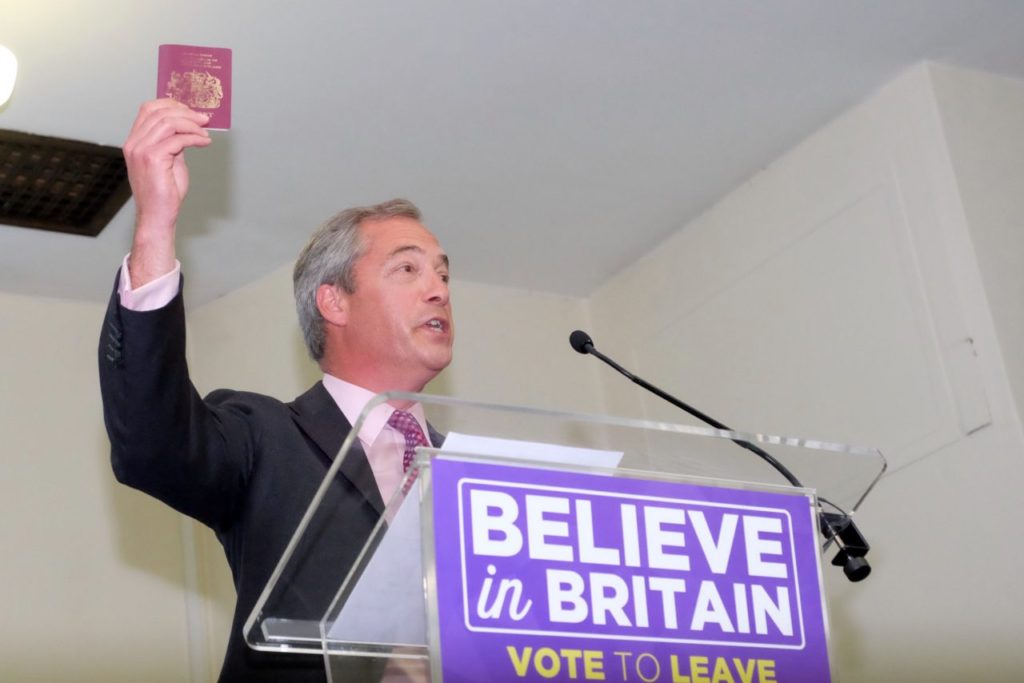 Mr. Farage said that for him and others in UKIP it has been “a long and quite lonely and difficult road”, but he takes pride in the way they have “managed to change British politics” which “reaps a huge dividend for our nation tomorrow.”

He invited those present to think back 41 years to the last European referendum when, he said, “the British public were told that they were being asked to vote to remain in a Common Market — a Common Market about trade, be good for the economy, nothing to do with politics at all because of course we could veto things or opt out of things.”

He said this year’s referendum has “taken a very similar trajectory” with the Remain camp talking “endlessly” about the Single Market, “the biggest free trade zone in the whole of the world.” Mr. Farage continued:

“And whenever a question is asked about further political integration, about perhaps a European army, about one of David Cameron’s lifetime political dreams of Turkey possibly joining, we’re told ‘no, no, no, no, no, don’t worry about that, we’ve got a veto’ or ‘we’ve got an opt out’.

“They tried, the Remain side, to use the term Single Market in exactly the same way as they use the term Common Market 40 years ago.”

He then explained that the UK is not part of a free trade zone, labeling it “a customs union, or perhaps in simple English, a big business cartel” which was joined to avoid tariffs, but which now regulates the “88 per cent of the British economy which does not, and never has, traded with our European neighbours.”

The quid pro quo for tariff-free trade is, he said, “having to accept unlimited free movement of people” and being “prohibited from making our own deals with the rest of the world” for which we pay a net membership fee of £34 million a day — a sum he said was “not contentious.”

Mr. Farage went on to reveal the “real agenda” of the EU, which he describes as “political” rather than economic. He listed the effects of membership of a political union:

“European law is supreme, the European Court of Justice overrules our Parliament and our courts. And yes, we don’t even have a British passport any more, alright? We’ve got a European Union one, which of course is available for up to 508 million people.”

He then called on people to “stop pretending what this European project is”, stating:

“They have an anthem, they’re building an army, they’ve already got their own police force, and of course they’ve got a flag.

“And at the end of the day tomorrow when people vote, they must make a decision — which flag is theirs?

“And I want us to live under British passports and under the British flag.”

Mr. Farage predicted that were tomorrow’s referendum about joining the EU, it would be overwhelmingly rejected. He then analysed who lies behind the Remain campaign.

A few, he conceded, were long-term European dreamers like Lord Heseltine, but the majority  are “vested interests, the big corporate businesses, who for the first time in history are able, through the European Commission, to effectively write the rules for their own businesses to the detriment of their small and medium-sized competitors.”

He also identified the “political and bureaucratic class” including the “10,000 people working for European institutions in Brussels who earn more than David Cameron.”

Mr. Farage then turned his attention to the Prime Minister, saying:

“He told you he was going to get a great deal for this country, he got very little. He came back insisting that it’s legally enforceable, but it is not.

“And I expect that if we were to side with Mr. Cameron tomorrow the European Parliament will begin unpicking that deal before the summer recess.”

He then accused Mr. Cameron of making “yet another frankly dishonest pitch to the public when he tells us that if we vote to remain we’re voting for further reform” saying that Lady Thatcher at the height of her powers and Tony Blair in his first term both failed on that front.

“The word ‘reform’ in Brussels,” he explained, “means something different. It means a greater, deeper drive towards centralisation, a deeper commitment to fulfilling the dreams of the original founders, the fulfillment of a United States of Europe.”

For those reasons, he claimed this referendum is “the people versus the establishment.” Speaking of his attempt to highlight the plight of British fishermen with his Thames flotilla, he referred to an enduring image of the campaign:

“…the sight of a multi-millionaire former rock star shouting abuse, making a variety of hand gestures — some of which got published in the papers and some didn’t — not directed just at me, that would have been OK, but directed at our fishermen.”

That, he said, summed up the fact “it’s the vested interests, it’s the rich, it’s big business, it’s those who are doing very nicely thank you against pretty much everybody else.”

“We can do better than this. Tomorrow we can vote for real change.

He finished with an appeal to dedicated Leave supporters, “who would crawl over broken glass” to vote, to get other non-voters to join them at the polling station, and said:

“It may be tight, it may be narrow, but I genuinely believe that we are going to win this.”