A disgruntled coalition of “anti-fascists”, feminists, communists and anarchists have rallied in central London, calling on people to “fight” the “racist” media and Brexit vote, as well as demanding a pro-EU “independent London”.

The “After the Referendum, Defend all Migrants” protest gathered in Whitechapel, East London, and descended on the headquarters of News Corp in the Shard skyscraper, blaming the “fascist and racist” media for the referendum result.

The anti-media sentiment was palpable, with marauding, violent gangs of “anti-fascists” keeping reporters from taking photographs or getting near the speakers. “Murdoch out, migrants in!” they chanted. 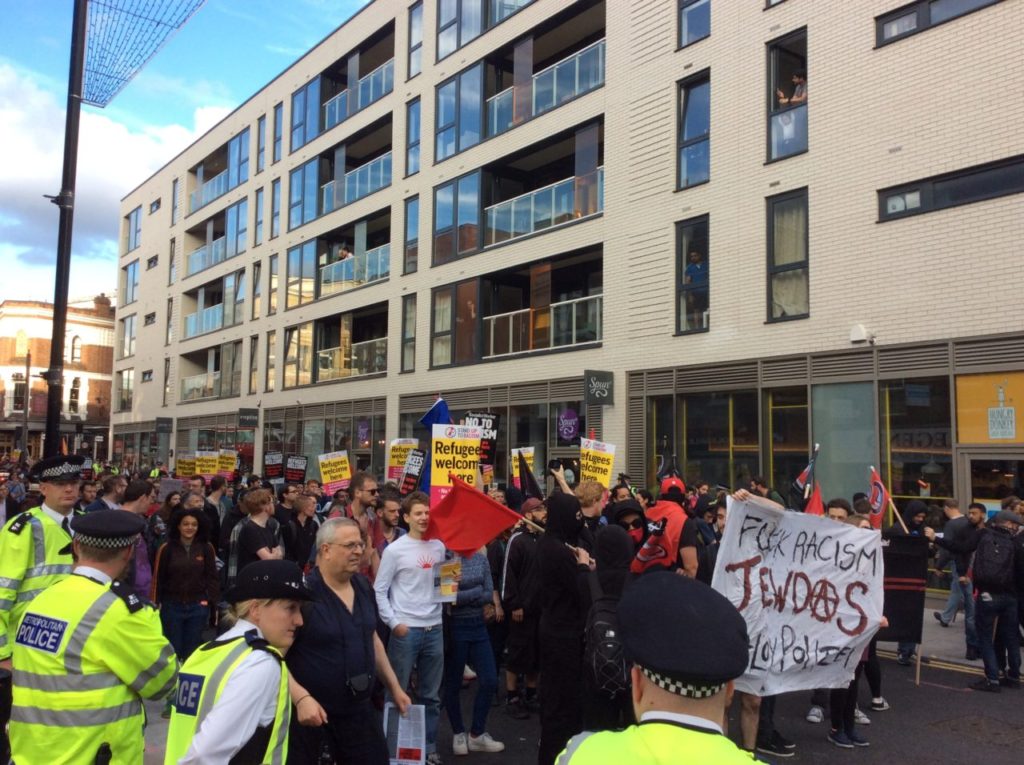 “The mainstream parties and the mainstream media… have spent 20 years insisting that immigrants are a ‘problem’. The UKIPs of this world just clean up in their wake”, wrote organisers in the Revolutionary Socialism in the 21st Century (RS21) magazine before the event.

Adding: “Far-right political violence is becoming increasingly commonplace. The fascist riot earlier this year in Dover and the assassination of pro-migrant Labour MP, Jo Cox, are symptoms of this drift.” 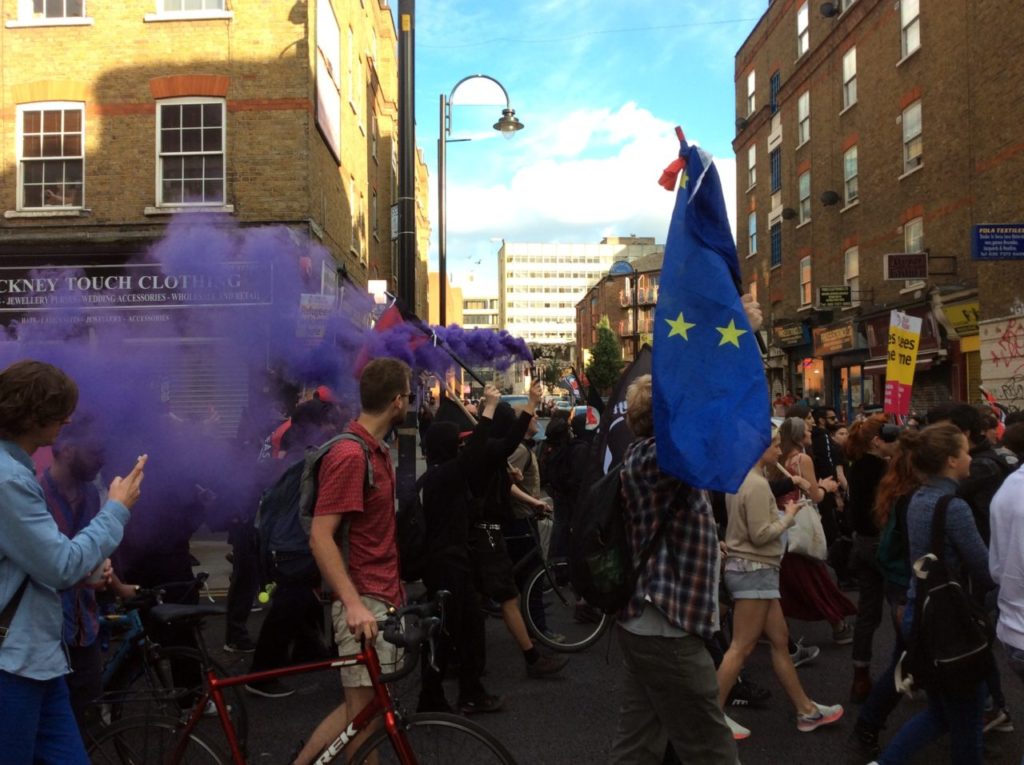 The event was supported by the English Collective of Prostitutes, Sex Workers Open University, Lesbians and Gays Support the Migrants, and the London Anarchist Federation, among others.

“Smash borders, save the EU!”, and “Tories out, migrants in!” they snug on the march, as well as the obligatory: “No borders, no nations, stop deportations!” 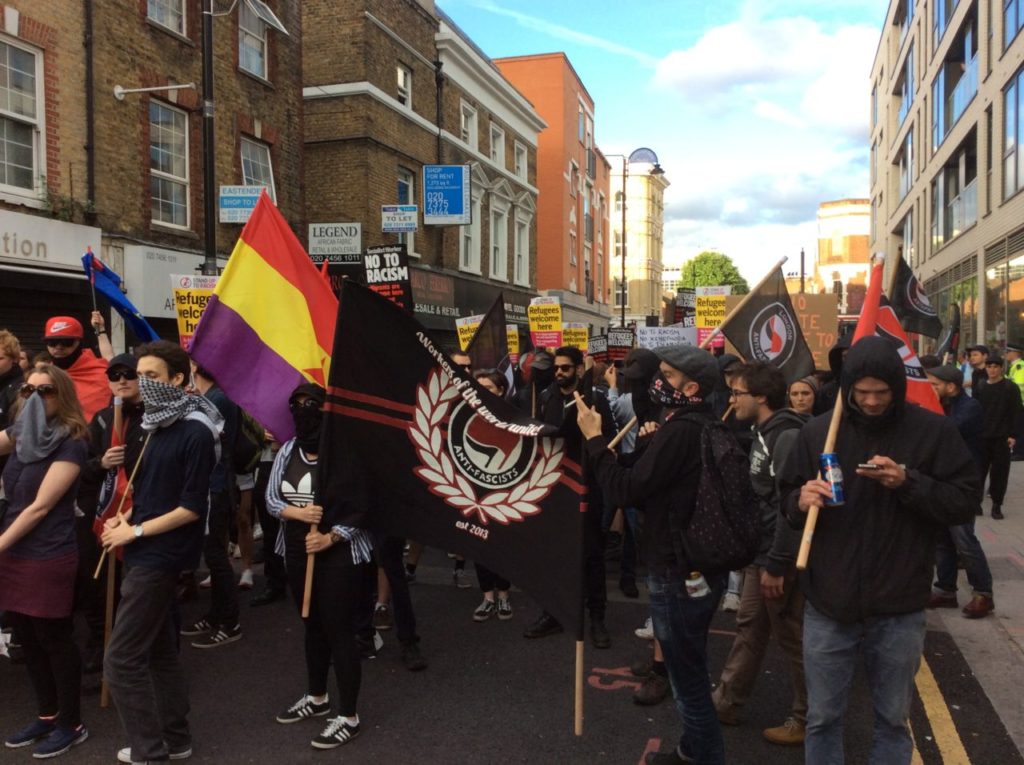 Speaking to the crowd, Anna from the Movement for Justice group, who spoke with a thick Spanish accent, said: “When I moved to London it was because I wanted to live in a free multi-cultural society… and now there is a fight to fight.

“It is a fight that regards immigrant rights, as well as rights for everyone, to have jobs, a better life, free education and everything…” she said.

Adding: “How we got to this point with the referendum… is different governments, left and right, and their racist scapegoating of immigrants. They have been using racism as a tool to divide and rule the communities… and push for all the cuts and all the austerity.”

Other speakers warned of “rising violence” and “racists attacks” after the Brexit vote. 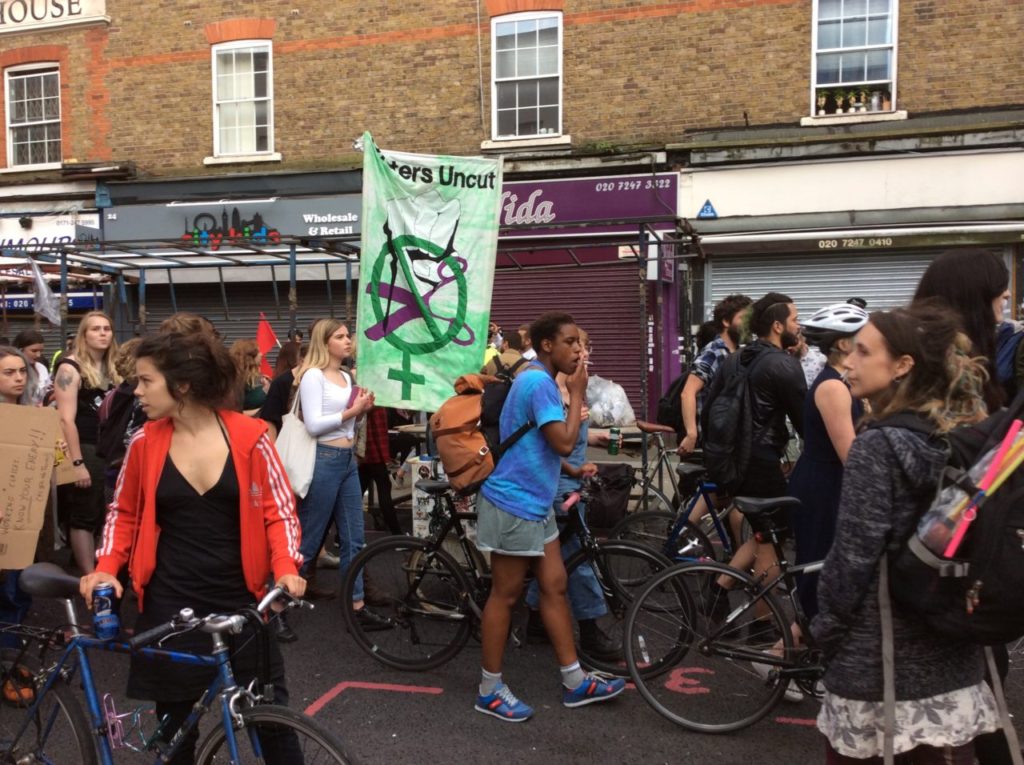 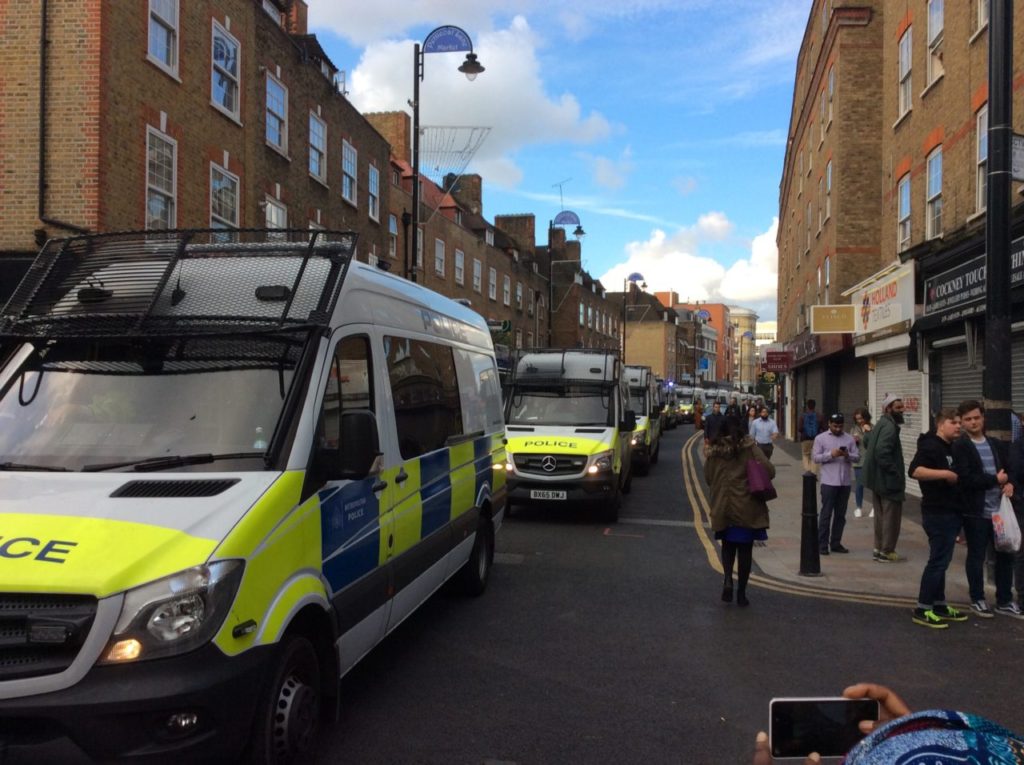 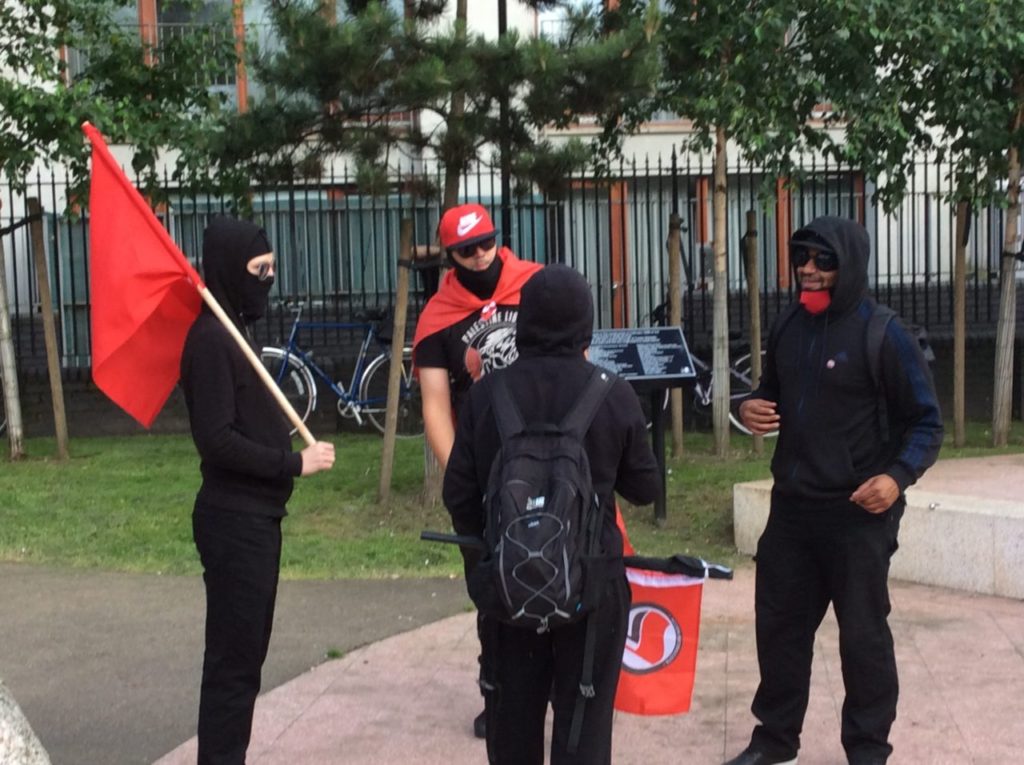 The protest came on the same day that London’s first ever Muslim Mayor promised to fight efforts to reduce the number of EU migrants in the capital. Sadiq Khan wrote on Facebook:

“I want to send a clear message to every European resident living in London — you are very welcome here. As a city, we are grateful for the enormous contribution you make, and that will not change as a result of this referendum.

“There are nearly one million European citizens living in London today, and they bring huge benefits to our city — working hard, paying taxes, working in our public services and contributing to our civic and cultural life.

“We all have a responsibility to now seek to heal the divisions that have emerged throughout this campaign— and to focus on what unites us, rather than that which divides us”. 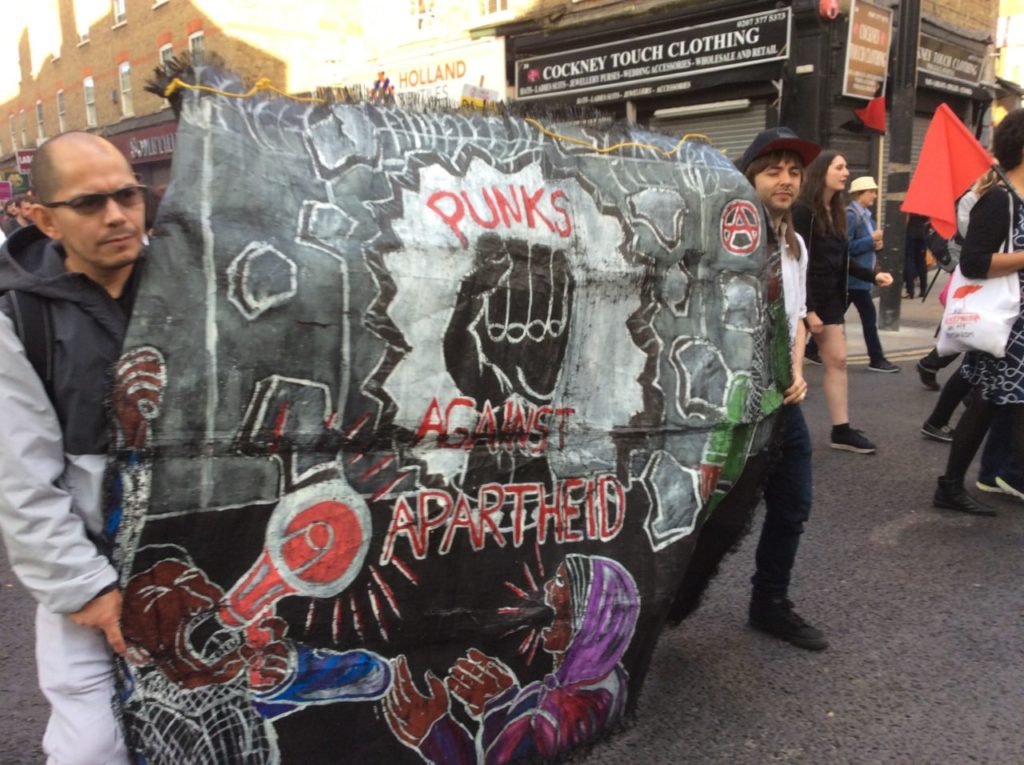 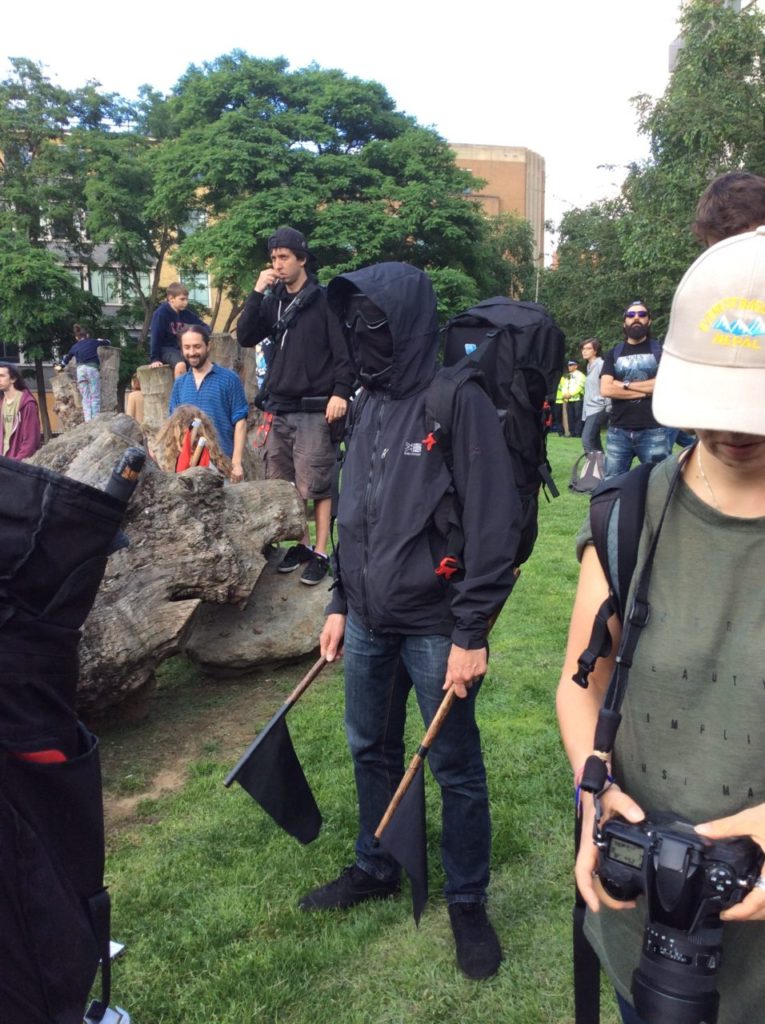 One speaker at the protest was heard calling for an “independent London” after the capital emerged as the only region in England to vote to stay in the EU – by a whopping 60 per cent.

Nearly 140,000 people have now signed a petition to this effect, “calling on [London Mayor] Mayor Sadiq Khan to declare London independent, and apply to join the EU”.

The petition states that: “London is an international city, and we want to remain at the heart of Europe.

“Let’s face it — the rest of the country disagrees. So rather than passive aggressively vote against each other at every election, let’s make the divorce official and move in with our friends on the continent.” 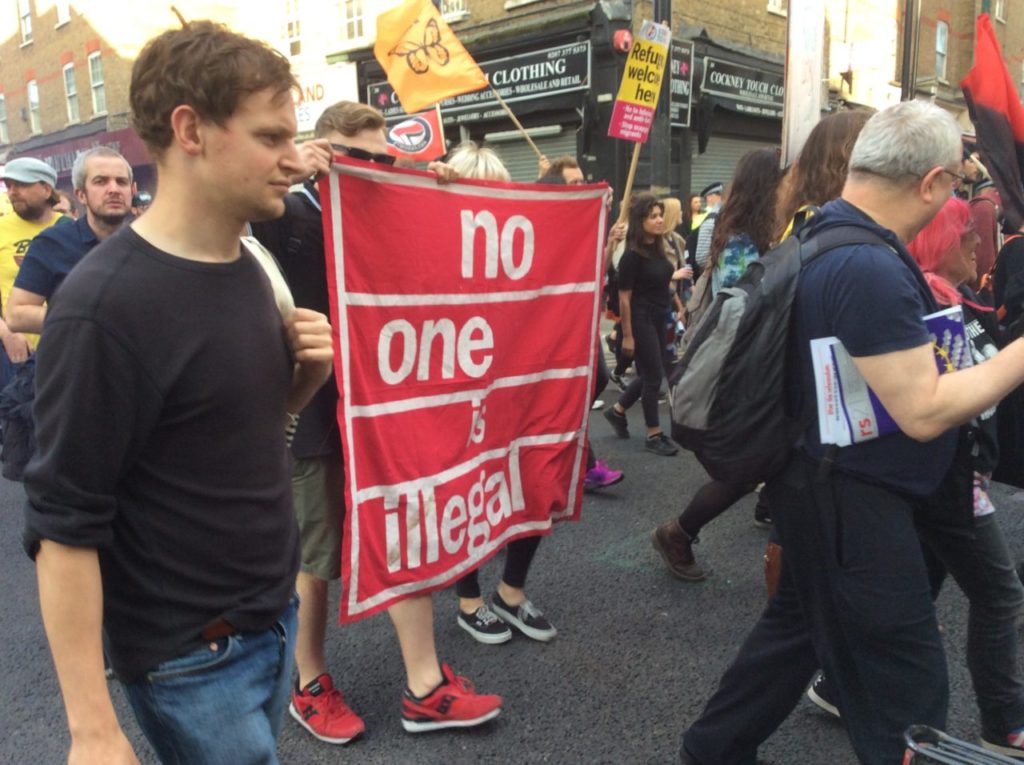 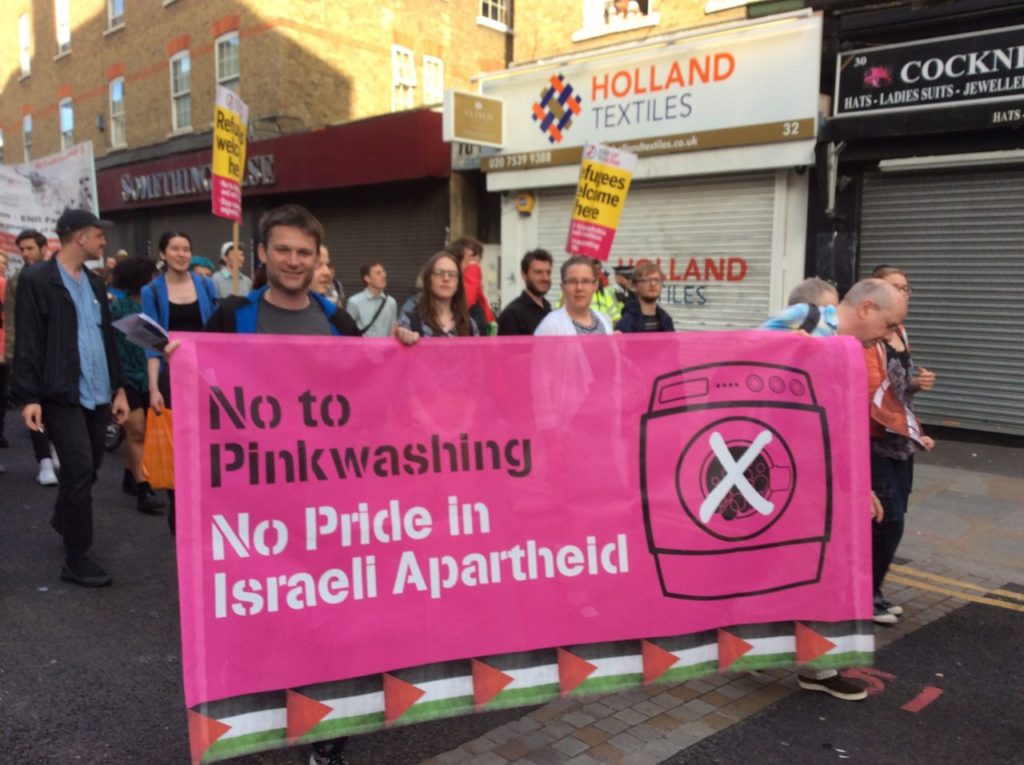 Speaking after the event, protestor and photographer Peter Marshall said: “Socialists and anarchists held a rally and march on the day after the UK voted to leave the EU for migrant rights and against racism and fascist violence.

“Migration and immigrants have been attacked and scapegoated not only by both Remain and Leave campaigns but by mainstream parties and media over more than 20 years, stoking up hatred by insisting immigrants are a ‘problem’”.

Adding: “After a rally in Altab Ali Park, Whitechapel, well over a thousand protesters set off on a long march to the offices of News International.” 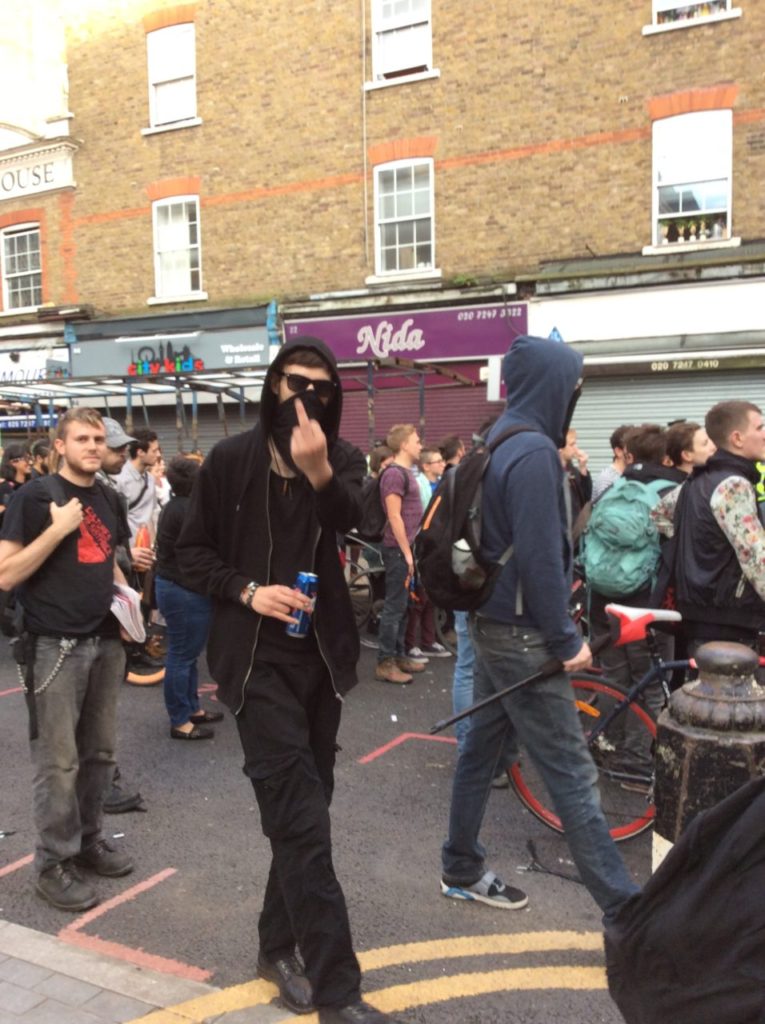 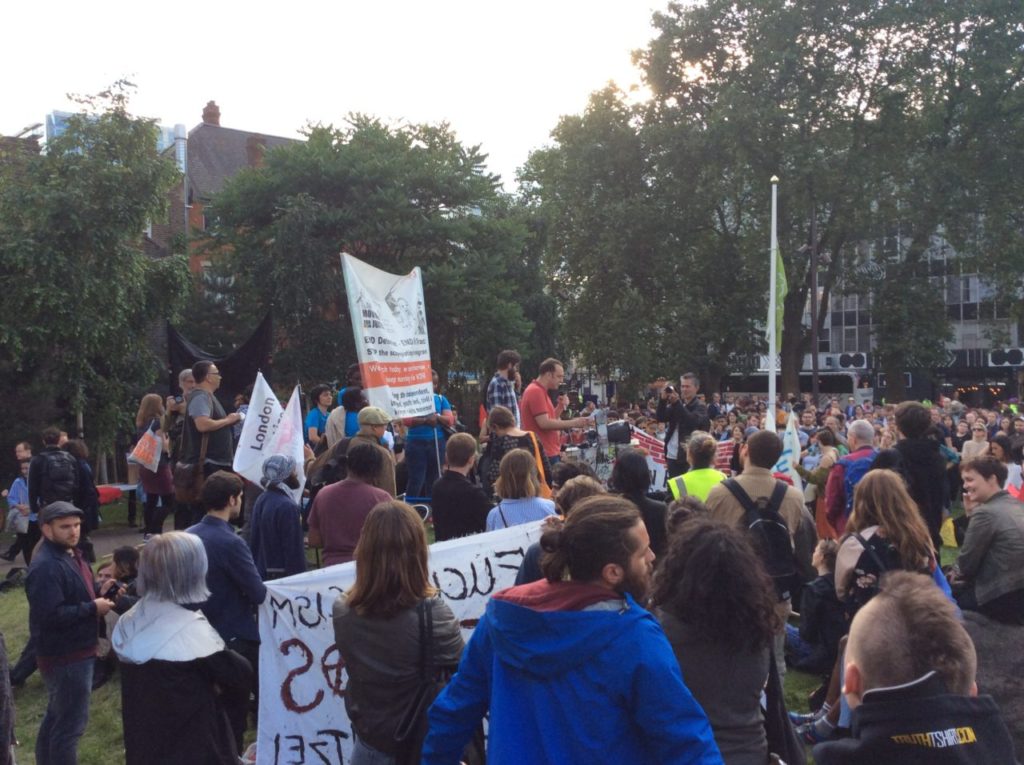 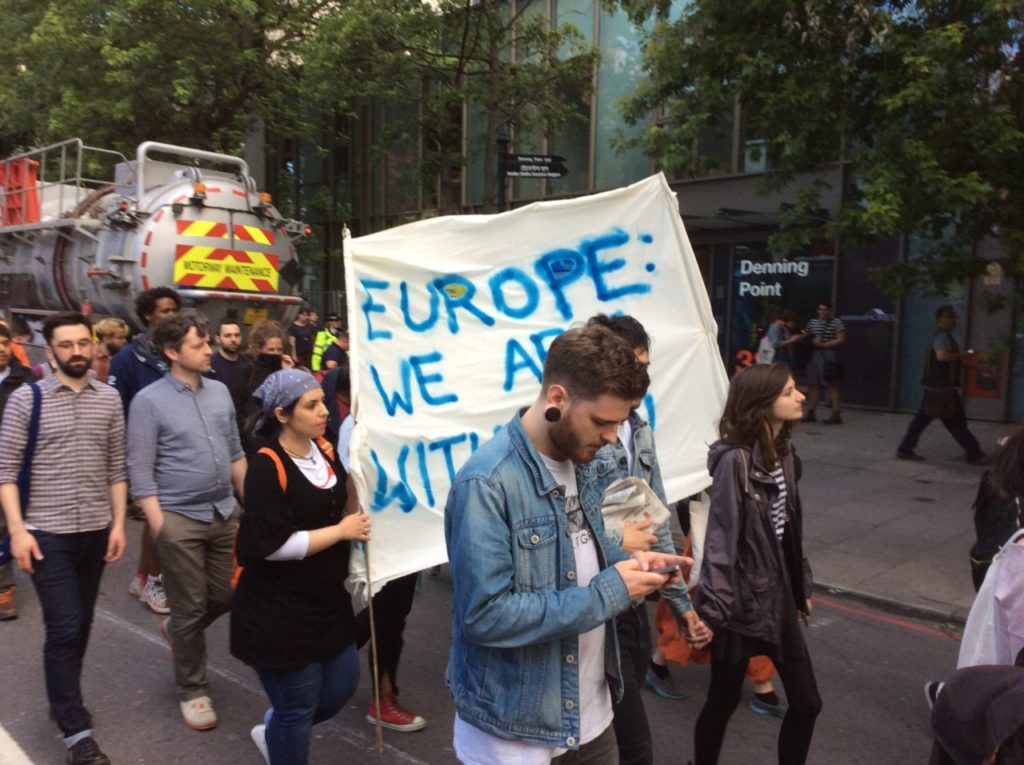 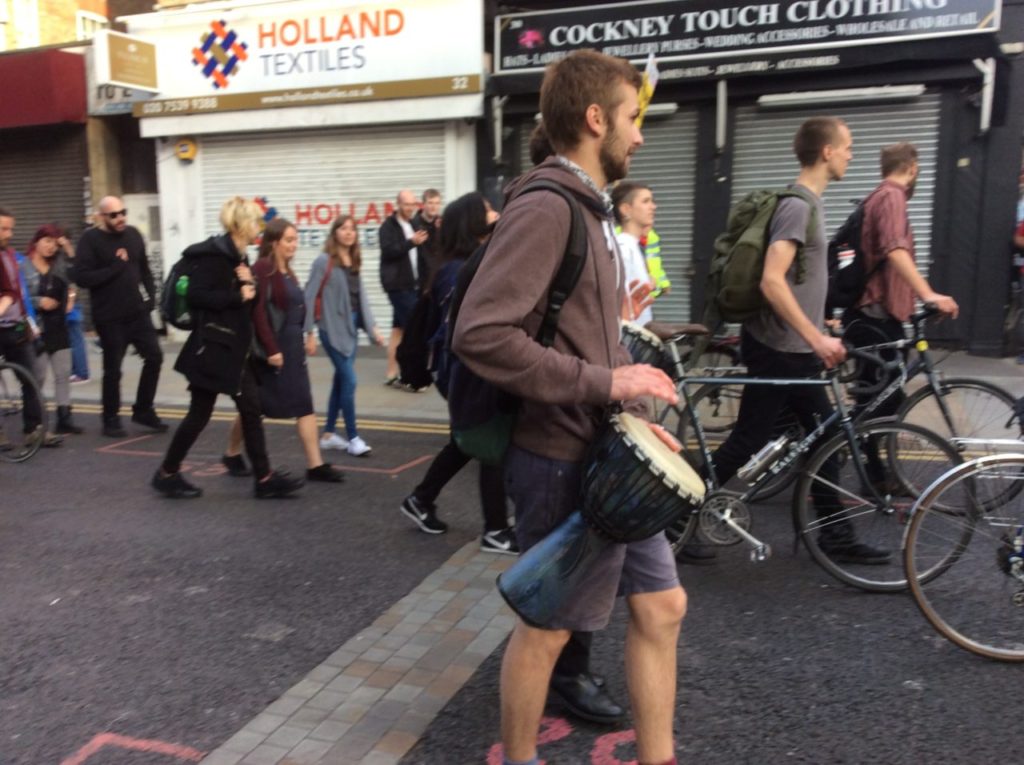 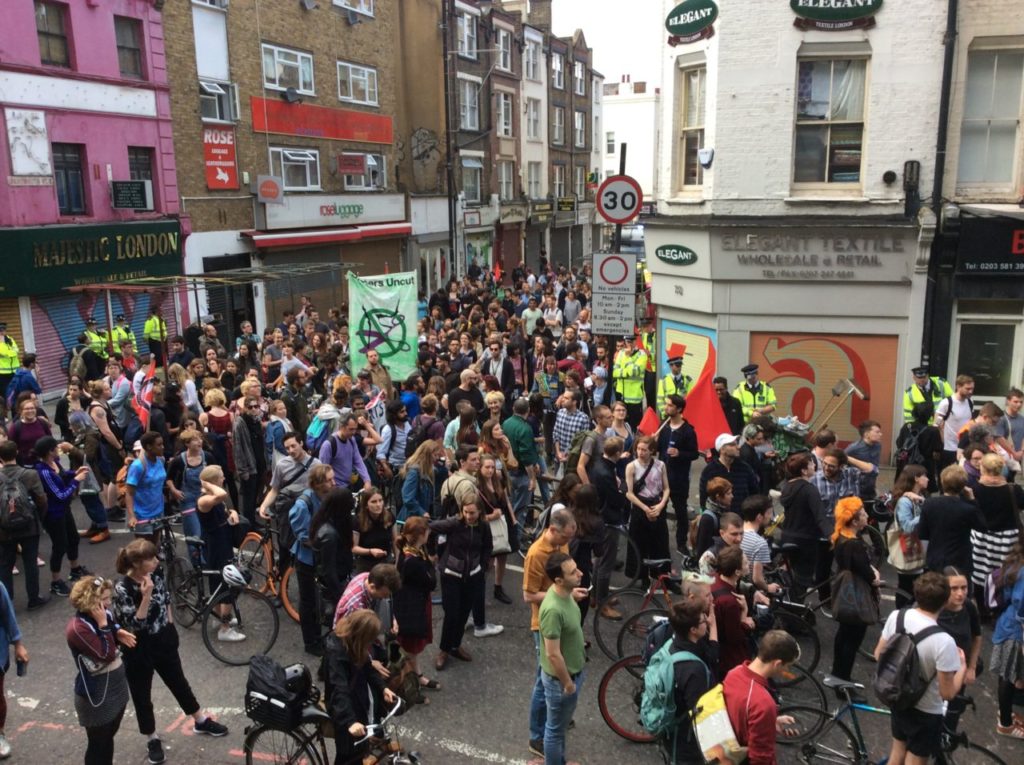