The BBC has seized upon a report by a left-wing think tank, which openly conflates criticism of Islam with racism, to claim “islamophobia” on social media has “peaked” and imply more censorship is needed.

Demos, whose Chief Executive is Claudia Wood, who joined the think tank from Tony Blair’s strategy unit, developed a method of supposedly automatically identifying Tweets that are “hateful, derogatory, and anti-Islamic”.

They claimed that over 5,000 “Islamophobic” tweets are sent every day and that the number “peaked” after a number of Islamist terror attacks rocked Europe this July.

“Islamophobic tweets ‘peaked in July’”, claimed a BBC article and extended segment on the BBC News Channel, after they were given “exclusive access” the report which they published alongside a series of emotive and subjective interviews with “offended” and aggrieved British Muslims.

These “possibly socially problematic and damaging” online utterances were said to “contain one of a number of specified keywords”.

However, the National Secular Society (NSS) labelled the report “an accidental case-study in why we should all stop using the meaningless and sinister word ‘Islamophobia’”, and identified some serious methodological flaws.

Benjamin Jones, the communications officer of the NSS, explained in a blog post:

“In their report Demos selects some tweets it included in the study, which they presumably think are good examples of their methodology in action. A tweet stating “Morocco deletes a whole section of the Koran from school curriculum as it’s full of jihad incitement and violence The Religion of peace” is treated the same way as a tweet saying “I fucking hate pakis” in their methodology.

“One of these tweets criticises an idea. The other is racist. One describes and mocks a belief system, the other (verbally) attacks people. Demos’ methodology treats both of these tweets in the same way.

“I have read (an English translation of) the Koran. Saying it contains violence (it does) is in no way comparable to using racist language.

“This is an appalling conflation, which creates a false moral equivalence between racism and criticising a set of ideas.

“Another tweet Demos offer as an example reads: “Priest killed in #Normandy today by a Radical Islamic Terrorist yet Hillary says that Islam is peaceful! 1274 attacks this year=peaceful? Ok.”

“Is asserting that Islam doesn’t seem to be conducive to peace really ‘Islamophobic’? The BBC apes Demos’ dangerous line, referring not to anti-Muslim, but explicitly to “anti-Islamic” tweets as ‘Islamophobic’.

“… Wanting to jail homosexuals might also be “socially problematic”, but pointing out that half of British Muslims do want to criminalise homosexuality and most think it is immoral would have me labelled an ‘Islamophobe’ under Demos’ methodology.”

The report’s authors claim that “we believe it is important that the principle of internet freedom should be maintained… However, racist, xenophobic, Islamophobic and misogynistic abuse can curtail freedom…”

In the methodology section of their paper, they write that “An Islamophobic expression was defined as the illegitimate and prejudicial dislike of Muslims because of their faith”, but conceded that, “Islamophobia can take on a very large number of different forms, and its identification, especially within Twitter research, was often challenging.”

“Ultimately, this research comes down to the judgement of the researchers involved”, they add. 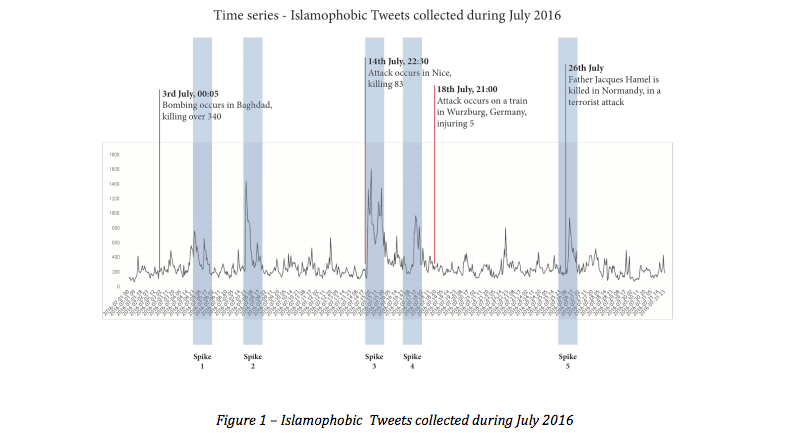 According to NSS, Demos clearly failed to successfully identify bigotry, and by conflating it with legitimate criticism Islam and Islamism, they and the BBC have damaged people’s ability to speak freely on the subject.

An example of this conflation came within the BBC’s own report, when a man interrupted one of the Muslim interviewees to say that “there is no sharia law here” and “we’re losing our freedom of speech”.

The man was immediately castigated by the Muslim interviewee, and the BBC ran a second article titled: “BBC Islamophobia discussion interrupted by Islamophobia”, implying that stating Sharia law isn’t part of UK law is itself Islamophobic.

Convictions for crimes under Section 127 of the Communications Act of 2003, a law increasingly used to prosecute “internet trolls”, have increased ten-fold in a decade.

Earlier this week, the office of London’s first Muslim mayor announced they had secured millions of pounds to fund a police “online hate crime hub” to work in “partnership with social media providers” to criminalise “trolls” who “target… individuals and communities.”

And in May this year, the EU announced that Facebook, Twitter, YouTube and Microsoft had “committed” to working more closely with them and national governments and “their law enforcement agencies” to help “criminalise” perceived “illegal hate speech” online.