The anti-Brexit (we’ll go by ‘Remainiac’ or ‘Remoaner’ from now on) newspaper ‘The New European‘ has declared that the “loony alt-right site” – a spurious reference to Breitbart News – is now in the United Kingdom.

One major problem for author Sam Kriss is that Breitbart London’s launch predates his article by nearly three years, and was recently described by fellow Remainiac paper the Financial Times as being bigger (in the UK alone) than Sam’s own regular parish: Vice UK. 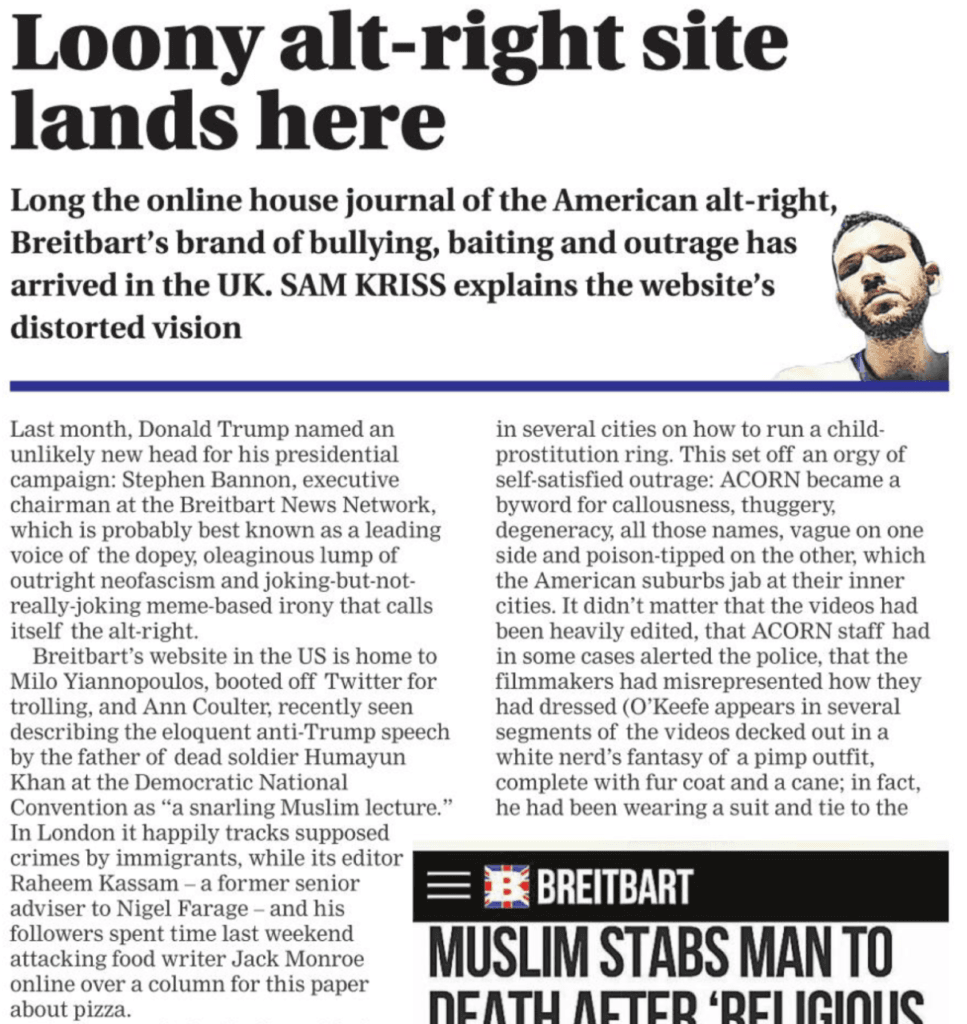 How Sam Kriss f*cked it all up

I’m actually really disappointed. I love hit pieces. Especially when they’re about me. But Mr. Kriss has basically written a fantasy article based on what he wishes, rather than what’s true. To him, no doubt, the truth would be a LOT, LOT worse. So it’s a shame he didn’t bother doing any proper research.

To his credit, Mr. Kriss replied to my e-mail on the matter, and admitted: “You have indeed caught me out, that was a glaring factual error. Part of the job of any media organisation is to watch out for inaccuracies from its competitors; the more each of us do it, the better we can all be, and I thank you for your sterling work improving the image of our entire industry”.

He was obviously prompted by his embarrassed editor, Matt Kelly, who failed in an attempt at a Twitter spat with yours truly last week. Mr. Kelly revels in New York Times articles about his newspaper which sells fewer copies every week (40,000-ish) than I reach with a single tweet sent in the middle of the night.

Mr. Kriss’s article begins by describing Breitbart News as “long the house journal of the American alt-right” failing to note:

But Sam won’t let facts stand in the way, he continues: “Breitbart’s website in the US is home to Milo Yiannopoulos, booted off Twitter for trolling, and Ann Coulter…”. Yes, except, no:

Let’s keep going. We’re only ONE PARAGRAPH IN, PEOPLE!

“…the site’s founder and namesake, Andrew Breitbart, would have never allowed this,” Mr. Kriss writes, talking about some fantastical, shock troop-dystopian, alt-right future he has concocted in his own head for the sake of filling up a column in the Remoaner rag.

It is unlikely he knew Andrew Breitbart, in order to make that claim. But even if he did: Breitbart News is still run by Andrew’s best friends, confidantes, family members, and primary staff. Given Mr. Kriss’s penchant for the absurd, I wouldn’t put it past him to have based most of his research for this piece on a Ouija board session, but channel Andrew Breitbart he did not.

This is all quite unsurprising, given that Mr. Kriss’s life’s work appears to culminate in being a self-hating Jew tweeting psychotically at the Israel military, as well as writing extensively about how it feels to be cuckolded.

In response to my questions to him on the matter of the destruction of the State of Israel, Mr. Kriss replied: “Yes. I support the destruction of all states, but as an Israeli national I think I’m entirely within my rights to call for Israel’s destruction as a matter of urgency. I would add, as if this needs explication, that the state and the population are distinct entities”.

Maybe I’m being unfair, but Mr. Kriss’s work has been described as a “grossly unappetizing word salad” and I couldn’t have put it better myself.

A master of projection indeed, he seems happiest when name-dropping Kierkegaard, Fanon, Marx, or Freud. My favourite line from his rant about how British schools are secretly white supremacist hubs reads: “Private schools encourage a culture of snobbery and contempt far more destructive than any chimerical Salafist plot…”

Did you read that? Eton is a bigger threat to the world than ISIS.

Mind you, from a writer who feels the need to quote Heidegger in a tedious fulmination about Pokemon Go!, this is hardly a shock.

Mr. Kriss concludes for the New European that Nigel Farage and Katie Hopkins were part of the launch of Breitbart London: not true, and calls our editorial position on Islam in Europe “kookery”.

I can agree with him, however, on one point: Whenever the establishment political parties are trying to fudge the immigration debate, “…Breitbart is there, doing the only work it knows how to do”.

(P.S. Heidegger, Marx, Fanon, Kierkegaard, and Freud. There, now Mr. Kriss will feel more comfortable having read this. He even invoked Marx in his e-mail responses to me, most of which were attempts to be funny, but not witty or insightful enough to be published on these pages).

LISTEN TO ME ADDRESS THE ARTICLE ON BREITBART NEWS SATURDAY: