A decorated and highly regarded French General has been stripped of his office due to his involvement in a proscribed protest organised by Patriotic Europeans Against the Islamisation of the West (PEGIDA) earlier this year.

General Christian Piquemal, 75, a former paratrooper and commander of the French Foreign Legion, was fined €500 in May this year for taking part in a PEGIDA demonstration in Calais the previous February. The protest had come at a time of heightened tensions between the people of Calais and migrants living in the nearby Jungle camp, which had led to a ban on demonstrations in the town. 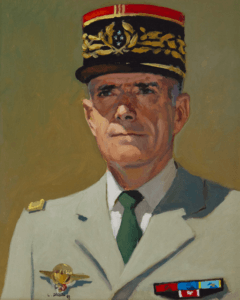 Ignoring the prohibition, the General addressed the crowd leading to his arrest – an event which led to uproar in France as the Foreign Legion is highly regarded among French patriots.

However, a later court hearing cleared the General of involvement in the organisation of the meeting, and the General thought that was the end of the matter.

Yet in September he received a letter from the military informing him that he was no longer to consider himself an active part of the military, it has now emerged.

It appears that at a meeting of the High Council of the Army held in June, Army officials advised the Ministry of Defence to strip him of his office without informing the General or his lawyers of the proceedings being held against him. The President, Prime Minister, and Defence Ministers, however, were informed.

“I’m deeply shocked by this unfair and unjustified decision, which seems to me to be excessive and disproportionate,” the General told Le Figaro.

The sanctions are “totally detached from the reality of my acquittal, offending every measure of decency,” the General said.

Although the General’s rank cannot be withdrawn, he has been banned from wearing his uniform or using his Military ID, which in principle are granted for life. In addition, he has lost his reserve list status.

It is these sanctions, which represent a return to civilian life, which “hurt the most”, the General said, rather than the financial penalties which will result from the sanction.

“I find it unacceptable that I can be ostracised in this way after giving forty years in the service of France. To be ditched like that and treated as an outcast.”

The General added that he now intends to take his case to the State Council, going all the way to the European Court of Human Rights if necessary.

In the meantime a group of supporters has rallied around the General, forming a defence force composed of military personnel and civilians, and chaired by General (2nd Division) Anthony Martinez.

For many of them, this disciplinary action is nothing more than “a political settling of accounts”, one military member of the group said.

The General concluded: “If the administration believes that I have transgressed my reserve duty [which continues to be valid for retired soldiers], by using my freedom of expression, this can only mean one thing: that my freedom of expression cannot be in line with that of the majority of the population. If it does not comply with political correctness, then it is sanctioned.

“The truth is that my case is an instrument to silence the Grande Muette [a French expression meaning the silent voice of the military] because other generals have expressed more controversial expressions before. They want to make me an example to silence the ranks.”