A booklet claiming that those who insult Islam must be killed and that apostates deserve assassination has been handed out at an East London mosque, it has emerged. Police are investigating the booklet as a possible hate crime.

The booklet, handed out at the Dar-ul-Uloom Qadria Jilania mosque in Walthamstow, claims that “any Muslim should kill” those who insult Mohammed. And citing Sharia law it argues for extra-judicial killings, saying that apostates “deserve to be assassinated”. 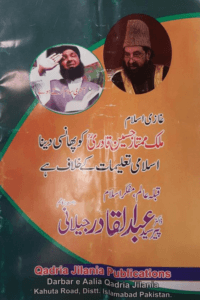 Discussing the case of Mumtaz Qadri, an Islamist who assassinated Pakistani governor Salman Taseer in 2011 for attempting to liberalise Pakistan’s Islamic laws, the booklet says that “all Muslims should support” Qadri. Accusing Taseer of being an apostate, the booklet adds that being a “big shot” does not excuse someone from the punishment of death, the Evening Standard has reported.

A worshipper at the mosque who was handed the booklet has told the paper: “The event was a few months ago. I took one, but other people took them as well.

“I think more than 100 people were at this event. It was at Giyarween Shareef [a holy gathering].

“Two or three people delivered the leaflet. Unfortunately, I am shocked. I think it gives a bad impression. Islam teaches when you live here you obey the law and the rule of law, but this is not doing that.”

The booklet carries the name of the mosque’s Imam, Syed Abdul Qadir Jilani, on its front cover along with a picture of him. According to the National Registry, Jilani co-owns the mosque with three others.

The mosque is also home to the International Muslim Movement charity, for which Mr. Jilani is a trustee.

In 2013, Jilani was at the centre of a controversy when Islamic station DM Digital was fined £85,000 by Ofcom for broadcasting a sermon of his in which he reportedly said Muslims had a duty to kill those who insult Mohammed.

However, he has denied having anything to do with the material, telling the Evening Standard: “I do not agree with the booklet’s contents. I am not aware of if, why or how, the booklet was distributed in Dar-ul-Uloom Qadria Jilania.

“If it was distributed… then this was done without any authorisation by either me or any member of the committee of Dar-ul-Uloom Qadria Jilania.”

Regarding the Ofcom fine, he insisted that his broadcast remarks made in response to a question on Islamic law in Pakistan, saying: “Ofcom made a decision against DM Digital TV, not me. Ofcom has failed to understand the speech in the context in which the referenced comment was made.”

A Scotland Yard spokesman said: “We will be assessing the contents of these leaflets to establish whether any criminal offence has taken place.

“We are committed to tackling hate crime in all its forms and have long since recognised the impact of hate crime on communities.”

The Charity Commission said: “We are assessing the information received as a matter of urgency so as to establish the facts and have contacted the charity’s trustees for their response.

“At this time, the commission has not opened a statutory inquiry into the charity. However, if the information provided is accurate it would raise serious regulatory concerns.”