(AFP) – Tens of thousands of protesters took to the streets of Paris on Sunday to demonstrate against gay marriage and to call for candidates in next year’s presidential election to support “traditional family values”.

The march was briefly interrupted by six topless feminist protesters from the Femen group who were quickly surrounded by demonstrators before police intervened.

The “Manif pour Tous campaign” has been re-activated two years after it last held a sizeable protest.

Protesters held signs with slogans such “A father and a mother — it’s hereditary” as they made their way towards the Trocadero concourse in front of the Eiffel Tower.

The target of their anger is the 2013 law legalising same-sex marriage introduced by the then justice minister Christiane Taubira. 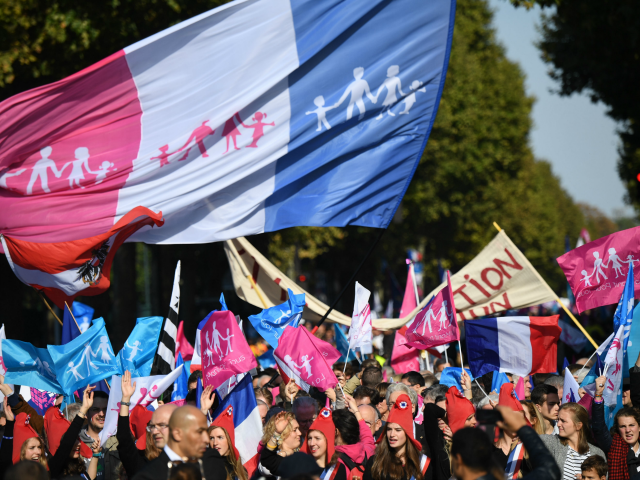 Participants wave flags and banners during a demonstration called for by the movement ‘La Manif pour tous‘ against what are seen as ‘new offensives against the family and education’ in Paris on October 16, 2016. / AFP / Eric FEFERBERG

One protester attending the march on Sunday, 72-year-old retired engineer Michel Delaune, said: “I am against gay marriage and against the crappy leaders who oppose the power of the people.”

Three years ago, Manif pour Tous mounted a vigorous campaign against same-sex marriage — at one point claiming to have brought 1.4 million on the streets of Paris.

The movement then faded away, but its leader Ludovine de la Rochere said it now had “a bright future” because Hollande’s Socialist government had “destabilised families”.

But none of the leading candidates for the right-wing nomination for next year’s presidential election have said they have any intention of repealing same-sex marriage if they are elected.